Egypt’s Sisi gets mandate for sending troops to Libya

The vote in parliament Monday comes a week after allied Libyan lawmakers gave Egypt the greenlight to intervene. 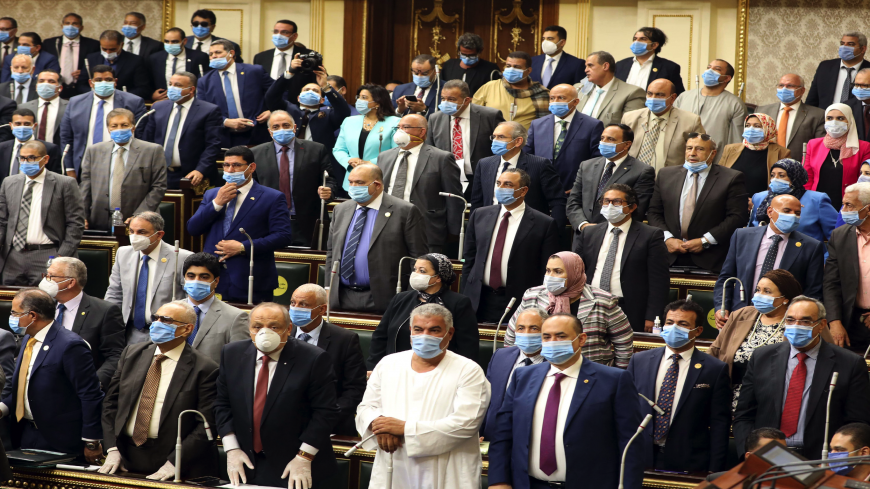 Egyptian parliament members attend a general session in the capital, Cairo, on July 20, 2020. Egypt's parliament greenlighted behind a closed-door session the possible deployment of troops to Libya to support Cairo's ally Khalifa Hifter if rival Turkish-backed forces recapture the city of Sirte - AFP via Getty Images

The House of Representatives "unanimously approved to send elements of the Egyptian Armed Forces in combat missions outside the borders of the Egyptian state to defend the Egyptian national security in the western strategic direction," read a parliament statement quoted by Ahram Online following the closed-door session.

Egypt, along with the United Arab Emirates and Russia, has backed renegade commander Khalifa Hifter in Libya’s six-year-long civil war. Turkey, which supports the rival UN-backed government of Prime Minister Fayez al-Sarraj in Tripoli, has condemned Egypt’s role in the conflict as “illegal.”

The vote in Egypt’s parliament Monday comes a week after Libyan lawmakers allied with Hifter’s forces called on Egyptian troops to intervene “if they see an imminent danger” to the national security of both countries.

During a meeting with Libyan tribesmen in Cairo last week, Sisi said his country would “not stand idle” amid escalating tensions in the northern city of Sirte. The Egyptian president has referred to Sirte, as well as the airbase of Jufra, as a red line.

Turkey-backed Libyan forces appear ready to enter the oil-rich coastal city, which has been under the control of Hifter’s Libyan National Army since January. After a yearlong campaign offensive on the capital of Tripoli, Hifter’s forces were expelled by the Government of National Accord in early June.