The Turkish president's remarks came a day after his Egyptian counterpart met with Libyan tribesmen in Cairo. 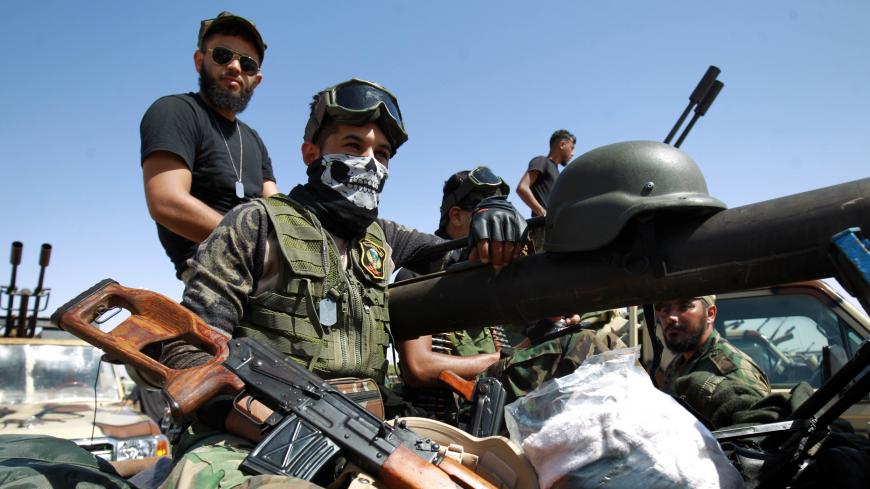 Members of the Libyan National Army special forces gather in the city of Benghazi on their way to reportedly back up fellow fighters on the front line west of the city of Sirte, facing forces loyal to the UN-recognized Government of National Accord, on June 18, 2020. - ABDULLAH DOMA/AFP via Getty Images

Turkish President Recep Tayyip Erdogan condemned Egypt’s role in Libya’s intractable conflict as illegal, a day after his Egyptian counterpart met with the heads of allied Libyan tribes in Cairo.

Erdogan told reporters today that Turkey "will not allow our Libyan brothers to stand alone” in their fight against the eastern-based Libyan National Army of Khalifa Hifter. The renegade commander is supported by Egypt, as well as the United Arab Emirates and Russia. The rival, UN-backed Government of National Accord counts Turkey among its patrons.

“Egypt's steps [in Libya], especially their standing next to putschist Haftar, shows that they're in an illegal process," Erdogan said, according to Turkey’s pro-government Daily Sabah newspaper.

In Cairo on Thursday, Egyptian President Abdel Fattah al-Sisi met with Libyan tribesmen and told them his country would “not stand idle” amid escalating tensions in the northern city of Sirte.

His meeting came as Turkey-backed forces appear poised to enter the oil-rich coastal city, which is currently under the control of Hifter’s troops. Ankara has urged the strongman’s forces to withdraw so that a “sustainable cease-fire” can be reached.

In turn, Sisi has warned the Egyptian military would intervene if the Government of National Accord moves farther east toward its border. On Monday, the parliament allied with Hifter’s army called on Egyptian armed forces to intervene “if they see an imminent danger.”

For the past six years, Libya has been embroiled in conflict between the two rival administrations and their array of foreign backers. Government of National Accord forces regained full control of Tripoli in early June, turning the tide of the war in their favor after a yearlong offensive by the Libyan National Army.