A round-the-clock lockdown underway in Libya follows days of anti-government protests in the capital city. 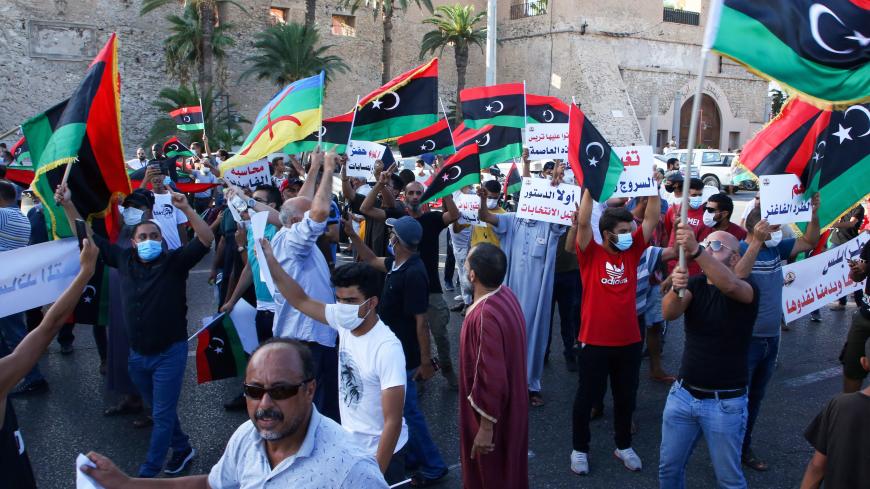 Libyans chant slogans at Martyrs Square in the center of the Libyan capital, Tripoli, during a demonstration protesting poor public services, on Aug. 25, 2020. - AFP via Getty Images

Libya’s internationally recognized government has imposed a round-the-clock curfew to slow the spread of COVID-19 after ongoing anti-government protests turned violent over the weekend.

Protesters on Sunday took to the streets of Misrata, al-Zawiya and the capital, Tripoli, to denounce government corruption, shortages of water and electricity and deteriorating living conditions. The curfew in Tripoli and its suburbs, which took effect Wednesday night, was announced by the UN-backed Government of National Accord and is set to continue until Monday morning.

In addition to the temporary lockdown, the Government of National Accord also announced it is prepared to use force against the “mobs” who have fired into crowds of protesters. Amnesty International said at least six protesters were abducted and several others injured after armed men wearing military-style camouflage, some with heavy machine guns, fired into the crowds during a demonstration in the capital Sunday evening.

The London-based rights group said the attack occurred in an area controlled by the al-Nawasi militia, which nominally operates under the Government of National Accord’s Interior Ministry.

Amnesty called for an independent and transparent investigation into the use of force, noting that the Government of National Accord “has the responsibility to uphold the right to peaceful protest [and] protect protesters from those seeking to silence them with live ammunition.”

The UN Support Mission in Libya also called for "an immediate and thorough investigation into the excessive use of force" in Tripoli by pro-Government of National Accord security personnel.

The oil-rich North African country has been embroiled in conflict for nearly a decade, and is now run by two rival administrations, each supported by an array of foreign actors that have flooded the country with illegal arms. The Turkey-backed Government of National Accord regained full control of the capital in June after more than a year of fighting in Tripoli with the eastern-based Libyan National Army, which counts Russia, Egypt and the United Arab Emirates among its backers.

Last week, the warring parties declared a cease-fire and called for talks to demilitarize the Mediterranean coastal city of Sirte. But hopes of a lasting peace were dimmed after renegade commander Khalifa Hifter’s eastern-based army dismissed the new cease-fire as a “marketing stunt.”

The fragile truce comes amid a surge in new coronavirus infections. With the addition of 553 cases, Libya’s government in Tripoli recorded Wednesday its highest single-day rate since March. The total number of confirmed cases in the war-ravaged country has surpassed 12,000, with 219 deaths.