Conflict between Israel on the one hand and Iran and Hezbollah on the other have been playing out this month in Syria and Lebanon. 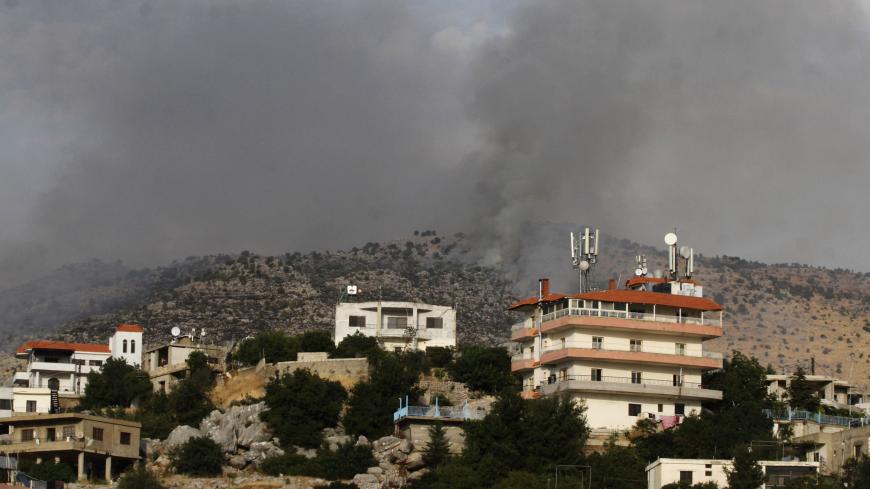 Smoke billows above the edges of southern Lebanon's Kfarchouba village after reported Israeli bombardment of the Shebaa Farms sector following reports of clashes in the Lebanese-Israeli border area, on July 27, 2020. - MAHMOUD ZAYYAT/AFP via Getty Images

On July 27, after a week of daily airstrikes attributed to Israel targeting several Iranian and Hezbollah interests in Syria, the Israeli military said a few of the Lebanese group’s fighters crossed into the disputed Shebaa Farms area between Lebanon and Israel, triggering tensions on the border.

Hezbollah denied that it made the maneuver. This may be an indication that while the balance of power is holding in Syria, Hezbollah is  attempting to play a deceptive game to safeguard its credibility with its domestic constituency and Israel on the Lebanese border.

In a period of a week, two incidents appear to again pit Hezbollah and Iran against Israel, first in Syria, then in Lebanon. The first was when alleged Israeli attacks in Syria destroyed weapons and ammunition warehouses and killed Iranian-backed non-Syrian and Syrian militiamen in southern and southwestern Damascus, according to the Syrian Human Rights Observatory. Hezbollah announced one death, Ali Kamel Mohsen, known by his nom de guerre Jawad.

What will this mean? Nicolas Blanford, a senior nonresident fellow at the Atlantic Council, said last year that Hezbollah Secretary-General "Sayed Hassan Nasrallah pledged retribution from Lebanon should Israel kill any of its members in Syria. A response was expected from Lebanon.”

The second incident took place July 27 when Israeli troops apparently thwarted a Hezbollah attack near the border with Lebanon. According to Israeli reports, a Hezbollah cell comprised of three to five fighters crossed the Blue Line a few meters into Israeli-controlled territory in the Shebaa Farm region and was repelled by Israeli troops. Israel then shelled hills surrounding the area.

Shebaa Farms was captured by Israel from Lebanon in the 1967 Middle East war.

Hezbollah denied any responsibility for the infiltration, attributing the incident to "the state of terror experienced by the Zionist occupation army" and promising retribution for the killing of the Hezbollah fighter in Syria.

The two incidents, which fall within the continuous Syria-Lebanon front line with Israel, may be part of Iran's and Hezbollah’s playing the long game — in Syria, by protecting their strategic interests and their positions there at any price, and in Lebanon, by winning the psychological game at a minimal cost given the challenges the country faces.

Syria expert Naswar Shaaban of the Omran Dirasat Center told Al-Monitor that Israel's targets for this strike fell into line with those of previous attacks, which have largely taken place around Sayyida Zeinab, Qeswa, Mazzeh, Daraya and Quneitra. Shaaban said that in part due to conditions imposed by Russia, Iran does "not have the capability to move its equipment and fighters around freely," leaving it vulnerable to Israeli attacks.

The lack of response of Hezbollah and Iran to Israeli attacks in Syria despite heavy losses is rooted in Hezbollah's and Tehran's strategic interests there, said Brahim Beyram, a Lebanese journalist and analyst close to Hezbollah.

Beyram told Al-Monitor he believes the priority for Tehran is to remain entrenched in Syria — not to retaliate for the losses Iran and Hezbollah are incurring. He said Hezbollah has several bases that it will not abandon in Aleppo, Homs, Damascus and close to the Lebanese border. “The priority will remain for the protection of its positions there,” he said.

A third pillar of Hezbollah’s and Iran's military thought is psychological and propaganda warfare, whether toward the enemy or toward their popular base. “Hezbollah has proven to be adept in playing psychological games with Israel, the infiltration into Israel and the promise of retribution for the death of its fighter in Syria are a case in point,” Beyram said.

The Lebanese group said its response to the death of Jawad “is definitely coming,” adding, “The Zionists have only to wait for their crimes to be punished.”

A source close to Hezbollah fighters said that if the organization failed to retaliate properly to the alleged Israeli attack that killed Jawad, its credibility will be further damaged given the unpreceded disastrous economic situation Lebanon is facing. “They are caught between a rock and a hard place,” the source said.

But Middle East Strategy Intelligence analyst Avi Melamed, who closely follows Israeli politics, told Al-Monitor “There is absolutely nothing Hezbollah can do — whether overt or covert operations disinformation, psychological warfare or any other — to stop Israel's attacks on Iran's military infrastructure whenever and wherever Israel decides to. Israel is determined to thwart the Iranian threat in Syria at all costs, including a massive war with Hezbollah. Hezbollah cannot dictate new game rules to Israel. Trying to do that while hoping to avoid a war with Israel could be a fatal miscalculation by Nasrallah.”

The source close to Hezbollah believes that the party will have to make good on its promise to retaliate, in due time and that given all the pressure it is facing both at home and abroad “it was bound to show its teeth, which could translate with an escalation of violence.” Deputy Hezbollah leader Naim Qassem has nonetheless dismissed the prospect of any military escalation with Israel.

The evolution of the situation on the Lebanese border will have to be carefully monitored in the next few days. Whether Hezbollah chooses or not to respond to Israel’s attack in Syria, and more importantly whether it can inflict a painful strike against Israel, may define Hezbollah's deterrent power at both the local and regional levels in the future.