The message behind Israel’s drone attack

Hezbollah is on edge as Israel continues its drone war in Lebanon. 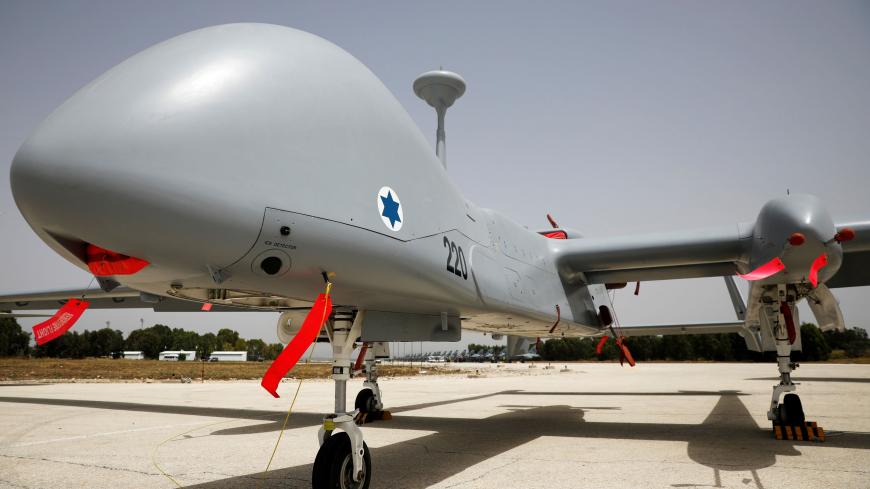 Israel's latest drone attack on a Hezbollah vehicle on the Syrian border with Lebanon April 15 is a reminder that Israel continues to pursue a low-scale deterrent strategy against the militant group, with an eye toward its permanent strategic goals in Lebanon.

A civilian vehicle belonging to Hezbollah fighters was destroyed last Wednesday on the Syrian side of the Jdeidet Yabrous border post, on the border with Lebanon. Israel did not immediately comment, which is typical, since it rarely confirms individual attacks on Iranian interests in Syria or Lebanon.

The attack was caught on video and clearly shows the militants exiting a Jeep Cherokee after an apparent missed first strike. The fighters had enough time to go back to the vehicle and pick up their luggage before the second strike blew up the jeep. The official Syrian news agency Sana reported that a "civilian car" had been targeted, causing only material damage.

A source close to Hezbollah told Al-Monitor that the group has limited its transfer of fighters to Syria because of the coronavirus pandemic. This would mean that the militants targeted were higher ranking and perhaps tasked with a specific military mission. Lebanon closed its borders with Syria in March over coronavirus concerns, but diplomats and military personnel can still pass.

The attack is part of Israel's larger yet limited low-scale strategy in Lebanon using unmanned aerial vehicles (UAVs). “The bombing falls within Israeli strategy in Lebanon focusing on reconnaissance work [in preparation for a possible next war]. It is as well a show of deterrence for Israel, one that is matched by Hezbollah,” Hezbollah expert Brahim Beyram said.

Israel's reconnaissance in Lebanon allows it to identify operatives and resources that can later be targeted in Syria, where rules of engagement set by Russia limit the ability of Hezbollah and its Iranian sponsor to respond.

Avi Melamed, a Middle East strategic intelligence analyst, told Al-Monitor, “It is yet another Israeli message that aims to reiterate two major Israeli red lines: Israel will not enable Iran to establish military capacities and infrastructure in Syria that present a serious threat to Israel. Israel will not enable Iran to provide Hezbollah with high-precision missile capacities.”

Drones have increasingly played an essential part in the Israeli war on Hezbollah in Lebanon. On April 12, the Israeli army fired eight flare bombs over al-Shahal area, near the town of Shebaa. The attack coincided with continuous UAV activity over Beirut and its southern suburbs in recent weeks, as noticed by this reporter.

On Oct. 31, Hezbollah fired an anti-aircraft missile at an Israeli drone over southern Lebanon, a Hezbollah bastion. Hezbollah said it shot down the aircraft over the town of Nabatieh, which the Israeli army denied.

A week earlier, a small Israeli army drone crashed in southern Lebanon, apparently after a civilian shot it down with a hunting rifle. The Israeli army said its drone was conducting routine operations to secure the border before it fell in Lebanese territory.

The most serious drone attack took place in August, when an Israeli UAV fell in the southern Beirut suburb of Dahieh, a Hezbollah stronghold. A second drone exploded at the same time, causing damage to a Hezbollah media center. The London Times reported that the two drones were targeting "crates believed to contain machinery to mix high-grade propellant for precision missiles."

The latest drone attack does not appear to be linked to the assassination of Hezbollah commander Ali Mohammed Younes in southern Lebanon April 3. According to a source close to Hezbollah, Younes was involved in counterintelligence operations in southern Lebanon and was assassinated in an area entirely under Hezbollah’s control. Hezbollah blamed Israeli intelligence for the assassination and mourned Younes as a martyr, suggesting that his killing was tied to his work.

A source close to Hezbollah said, “Younes’ assassination is the result of an internal struggle within Hezbollah.” Younes was both shot and stabbed, making the attack appear more personal.

Younes’ assassination followed the killing of Anton Hayek in southern Lebanon March 22. Hayek was a close aide of Amer Fakhoury, a Lebanese American who participated in the torture of Lebanese prisoners on behalf of Israel, which occupied southern Lebanon until 2000. US forces extracted Fakhoury from Lebanon after a Lebanese military court stopped prosecuting him on charges of treason.