When drones fall from the sky into Lebanon

Two drones have fallen over Lebanon in just a few weeks, raising questions about their origin and whether the two crashes could be coincidental. 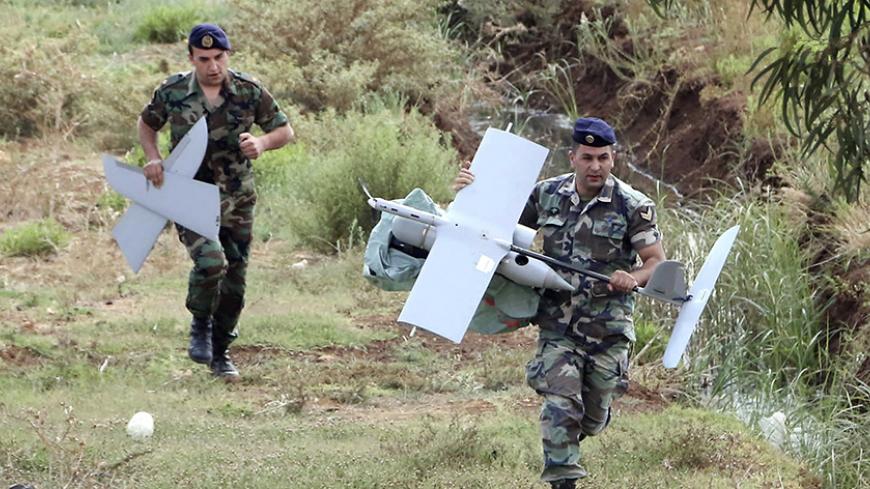 BEIRUT — Within a span of 20 days, two unidentified drones fell over Lebanon, for reasons that are still unknown. There was immediate speculation that Israel might be involved, raising several questions. Have Israel's technological capabilities dropped, or has Hezbollah's technology in Lebanon improved? Was it by sheer coincidence that a malfunction occurred?

The first drone fell on the morning of June 21 near the mountainous village of Saghbine, located in the western Bekaa Valley, near the Lebanese-Israeli border.

An eyewitness told Al-Monitor that the drone was visible to the naked eye as it came from the east, the common source of Israeli reconnaissance operations toward the Golan Heights in Syrian territory, to the side of Lebanon's Bekaa Valley, where unmanned aerial vehicles usually explore Lebanese regions extending from the south toward the north. Once their tasks are completed, the UAVs withdraw to the west over the Mediterranean Sea and return to their bases in Israel.

When the drone reached the airspace above Saghbine that day, the eyewitness, who spoke to Al-Monitor on condition of anonymity, confirmed that he heard two explosions a few seconds apart.

The villagers then saw a column of smoke ascending from the surrounding hills, and they realized the drone had crashed.

The drone fell far from populated areas, and it took more than two hours for some young people, driven by innocent and spontaneous curiosity, to reach the crash site. The eyewitness was one of those young people, and he confirmed to Al-Monitor that armed men had reached the site before them and probably had taken essential parts of the remains of the crashed drone.

When Al-Monitor asked the eyewitness about the identity of the men, he expressed reservations at first and then whispered that they were members of the “resistance” — Hezbollah — as they are the only ones present in the region and the only ones capable of doing such a thing. The same witness added that more than half an hour later, officials reached the area and took the remaining pieces of the drone for examination.

On the morning of July 11, fishermen and workers in the port city of Tripoli saw a large object fall from the sky and into the water a few hundred meters off the city pier.

They immediately notified the official security agencies — including the Lebanese army, the General Security, Customs and Internal Security — which proceeded to encircle the area by ​​land and sea, as Lebanese army divers searched the water and found the drone.

The incident occurred in an area that teems with fishermen and port workers at that time of day, and photos of the recovered drone spread among citizens and over several media outlets, unlike the Bekaa Valley crash, which took place in a remote, rugged area.

The Lebanese army confirmed that the Tripoli drone was an Israeli aircraft. However, it only said that the incident in the Bekaa Valley was under investigation, and no report has been issued.

As the Tripoli drone fell into the water, it remained fully intact. The Bekaa Valley drone, however, crashed in the Saghbine mountains, and all that remained of it was a small amount of rubble. Hezbollah kept quiet following the Saghbine incident and released no statement about it.

An official Lebanese military source told Al-Monitor on condition of anonymity that the issue is multidimensional and involves secrets that may never be disclosed — most notably the reasons for the two drones' crashes. In the case of the Bekaa Valley drone, the military source reiterated that the people of the area heard the distinct sound of two consecutive explosions.

It could be that the aircraft was Israeli, malfunctioned in the air, fell, crashed and was immediately followed by an Israeli aircraft that bombed it with an air-to-surface missile to destroy any remaining equipment so as to prevent it from ending up in the hands of an enemy of Israel, such as the Lebanese army or Hezbollah.

Another possibility is that the drone could have been shot down by a surface-to-air missile launched from Lebanese territory. In this case, and given the absence of any statement by the Lebanese army in this regard, the only remaining possibility would be that Hezbollah shot down the aircraft, which may explain why unofficial entities reached the crash site before others.

In the case of the Tripoli drone, the lack of any explosion leaves other possibilities on the table. The same military source said that the fall was either the result of a technical malfunction or a downing action that was done remotely, and not through explosive means.

According to the same source, the official Lebanese authorities possess information that suggests specialized Hezbollah agencies have been working on the development of the technological capabilities to face this type of aircraft.

The same source did not rule out that Hezbollah had achieved a major breakthrough in this area. Hezbollah, able to access Israeli imaging and broadcasting systems, was previously able to hack into photo libraries of Israeli surveillance aircraft and access them as soon as the aircraft sent them to bases inside Israel.

The military source said that the investigation into the crash of the Tripoli drone will either shed more light on the new phase of technological warfare between Israel and Hezbollah or show that it was possible for technical malfunctions to happen twice in an unexplained series of coincidences in 20 days.