Prime Minister Benjamin Netanyahu had to admit his annexation plan did not move forward July 1 amid tepid US support and a populace distracted by more pressing issues. 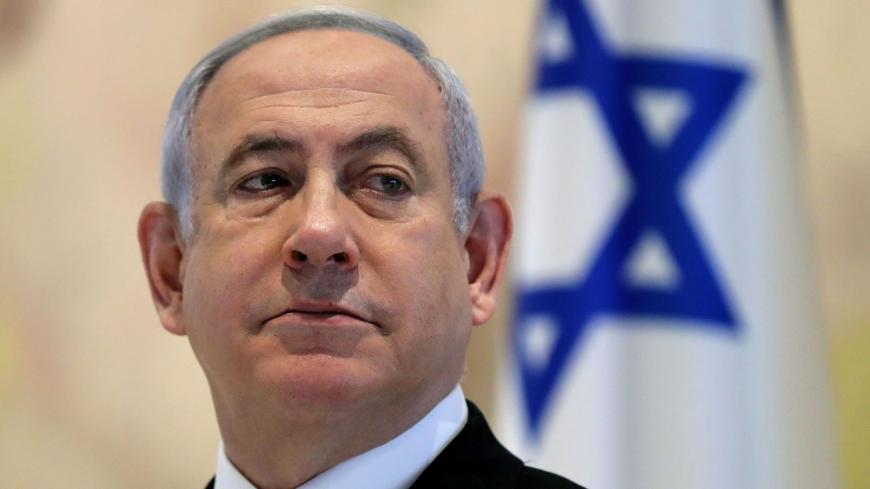 Israeli Prime Minister Benjamin Netanyahu attends a cabinet meeting of the new government at Chagall State Hall in the Knesset in Jerusalem on May 24, 2020.

The laconic statement issued by Prime Minister Benjamin Netanyahu’s office in the afternoon hours of July 1 officially confirmed what had become abundantly clear in recent days: Israel’s annexation of lands in the West Bank would not begin on his target date and the fate of the historic move is unclear.

“Prime Minister Benjamin Netanyahu continues discussions of the sovereignty issue with the Americans,” read the single-paragraph announcement. “At the same time, he held a discussion with the head of the National Security Council and top defense officials. … Additional discussions will take place in the coming days.”

If Netanyahu could have done so, he might have simply ignored the date he had been promoting for months as the starting date for Israel's annexation of the settlements in the West Bank and the Jordan Valley. However, his own hype and the hundreds of domestic and foreign journalists awaiting the highly touted development and flooding his spokespeople with questions forced him to make a statement.

Not only is the media on tenterhooks, so are Israel’s various security forces and agencies that have had to prepare for this date without knowing where the prime minister was leading them. Palestinian towns in the West Bank were also waiting on word from Jerusalem and many journalists staked out Palestinian Authority offices in Ramallah and Hebron to be close to the grand event that did not happen.

Netanyahu signed off on the vague statement intended to show that annexation was still on the agenda and was moving forward. Unofficially, his spokespeople said discussions had been ongoing in his office throughout the day, and the Jerusalem-Washington channel was buzzing around the clock. There have been intense discussions with US President Donald Trump’s Mideast envoy Avi Berkowitz, US Ambassador to Israel David Friedman — both of whom were in Israel this week — and Netanyahu’s man in Washington, Israeli Ambassador Ron Dermer.

Nonetheless, despite Netanyahu’s efforts to signal progress and momentum, July 1 will be remembered as an anticlimax to the chain of events Trump set off Jan. 28 at the White House when he unveiled his plan for Israeli-Palestinian peace that included a green light for annexation. The trumpeted unveiling was a gift from the president to Netanyahu on the eve of his third reelection bid in less than a year. The prime minister's right-wing electoral base went wild. Journalists identified with the political right who had accompanied Netanyahu to the historic White House ceremony celebrated on social media and the photos showing them dancing on Pennsylvania Avenue have become emblematic of the event.

Since then, everything that seemed certain has unraveled. The coronavirus struck, moving the annexation to the margins of the agenda and dramatically changing political realities in Israel and the United States.

The settlers, who initially crowned Netanyahu a modern-day messiah for the tidings he delivered from Washington, accused him of agreeing to the establishment of a Palestinian state in accepting the Trump plan. The left warned of various catastrophic implications of annexation and senior security officials warned of a violent Palestinian response in the West Bank.

Much has happened since that fateful day in late January. Trump is not the same president who was headed for certain reelection and is now fighting for political survival. Netanyahu is also not the same prime minister. He now heads a lame so-called unity government with his partner, Blue and White chair Benny Gantz, second guessing his moves and declaring June 29 that annexation could wait, that July 1 was not written in stone and that dealing with the pandemic and its implications was now the most important item on the agenda. Netanyahu, for his part, is dependent on Trump and is worried about the implications of a Joe Biden victory.

More than anything, Netanyahu appears to be constrained by two key factors. The first is the US administration, without which he will not act now and which is already sounding hesitant. Contrary to popular warnings that Netanyahu would make an irrational and irresponsible decision as he fights for his innocence of corruption in court, the prime minister remains as cautious as ever on foreign policy and defense matters. He is sufficiently experienced not to go it alone and risk Israel’s peace agreement with Jordan and his good relations with pragmatic Arab states.

The second factor is public opinion. Anyone who has worked with Netanyahu knows he is an ardent follower of the fluctuations of public opinion and adjusts his moves and messages in accordance with the polls.

All recent polls clearly point to public indifference to annexation in the face of heavy economic concerns. Netanyahu boasted of Israel’s strong and stable economy in recent years, as reflected in an improved standard of living for many Israelis who could afford to frequently vacation abroad, buy new cars and splurge on consumer goods. Now Netanyahu is well aware of the destructive impact on his popularity of the unemployment rate that has topped 20% at almost one million unemployed voters and a deepening recession that cannot be downplayed. Annexation has turned out to be a weak electoral card, with thousands taking to the streets to protest the loss of their livelihoods, businesses forced into bankruptcy and the media focusing on the virus-linked economic crisis.

Likud ministers who have spoken with Netanyahu said yesterday that he had not given up on the annexation and that “something will happen” in the coming weeks. Perhaps they meant that Netanyahu would win a nod from the US administration for a limited annexation of a group of settlements that enjoy widespread Israeli consensus, perhaps of the settlement town of Ma’ale Adumim near Jerusalem. They say he will present such a move as the first phase of a broader plan to impose Israeli sovereignty over other settlements.

However, this assessment, too, seems doubtful these days. At a July 1 meeting of the Knesset State Control Committee that convened to discuss the annexation, the head of the National Security Council’s intelligence branch, Rani Peled, admitted that the foreign affairs-security cabinet had yet to formulate its position on annexation. “We are in the throes of a process with a new cabinet. The ministers are being updated by all the security bodies and in the coming days there will be an in-depth discussion of the issue. By then, the political echelon may have formulated its position and the ministers will be able to relate to it,” he said.

The evening news programs on all three leading television channels focused on the dramatic rise in COVID-19 infections and grim economic data, pushing the annexation to the margins of the lineup.