Israelis to be barred from Jewish New Year pilgrimage to Ukraine

Uman’s Mayor Oleksandr Tsebriy caused a major storm after he announced that Israeli-Jewish pilgrims would be barred from the city this year. 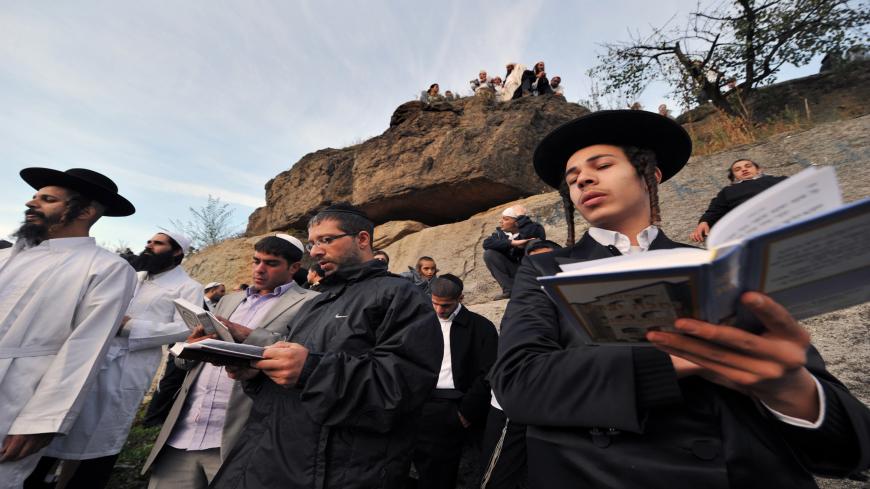 Ultra-Orthodox Jews pray in the small Ukrainian city of Uman, some 200 kilometers (120 miles) south of Kiev, Ukraine, Sept. 9, 2010. About 24,000 followers of Rabbi Nachman from around the world flocked to Uman to pay homage to their spiritual leader and celebrate the start of the Jewish New Year at his grave. - SERGEI SUPINSKY/AFP via Getty Images

Yisrael Kakon from the ultra-Orthodox town of Bnei Brak has traveled to the Ukrainian city of Uman on the Jewish New Year ever since he was seven years old. “The first time the authorities allowed trips to Uman was in 1988, when I went with my father. Since then I haven’t missed a year,” Kakon, 39, told Al-Monitor. “I won’t give up, no matter how much my plane ticket will cost. Some years I paid $1,800 for a ticket that should have cost only $300. But this year I don’t know what to do. The Ukrainians are closing the entire compound. I hope and pray that at the last minute, some kind of agreement will be reached.”

Every year, tens of thousands of Jews from all over the world visit the grave of Rabbi Nachman of Breslov, who lived in Uman until his death in 1810. This pilgrimage has continued for more than 200 years, except for short gaps mainly during wartime or when transportation was especially difficult. In 1988, a group of Nachman’s followers traveled to the grave in Uman and began to rehabilitate the site. Since then, the number of Jewish pilgrims has risen; last year 40,000 Jews made the trip from Israel, turning the event into “the largest prayer group in the world.”

This year, however, things might look different. On July 14, Ukraine's Interior Ministry announced that it would bar Israeli visitors to Uman for the Jewish New Year in September, citing the recent coronavirus spike in both countries. And so, the decision to bar the practice for the first time in 32 years has become the subject of much discussion among the tens of thousands of believers.

The city’s Mayor Oleksandr Tsebriy even posted a survey on his Facebook page asking residents whether the ultra-Orthodox followers of Nachman should be allowed to come to the city. At first, many residents said that they were welcome, but as the days went by the camp that opposes entrance to the followers on the Jewish New Year won.

In a meeting held in the Uman municipality, the no-entrance decision was officially ratified. Local reports said that participants of the meeting took into account the existing epidemiological situation in Israel and the fact that Israel now falls in the "red state" category due to its high coronavirus rate. They all agreed that the city must concern itself with the health and safety of its own Ukrainian citizens, in addition to those of foreign citizens. Reports also said that the decision was taken after a series of talks and meetings between Ukrainian and Israeli officials, with the Israeli side understanding what led to the cancellation of the Jewish pilgrimage to Uman.

“In principal, if we weren’t familiar with [the mindset of] the current mayor, no one would question his motivations now,” said Kakon, who is also involved in the doings of the Jewish community in Uman. “But Oleksandr Tsebriy has anti-Semitic inclinations. He was the one who built a monument for one of the Ukraine’s most famous Jew murderers, Ivan Gonta [in 1768]. He has a history of posting problematic content on social media and even the survey he posted on his Facebook page reeked of anti-Semitism; he purposely used grotesque pictures to characterize the Jews. His poll was directed against the Jewish tourists alone, and not against tourists in general.”

Kakon believes that the mayor is purposely stirring up anti-Semitic and xenophobic emotions in preparation for the coming elections in the city. “I could have understood if they closed the city to all tourists — that’s perfectly OK. But our inner instincts tell us that the mayor is lighting a fire of hatred for political gain. Let’s not forget that it was Jewish tourism that boosted the local economy and turned Uman into a thriving region.”

On Facebook, Jewish followers are discussing ways in which they can fool the authorities and somehow sneak into Uman. Student visas and even expedited requests for Ukrainian citizenship are offered to Nachman's followers by dubious characters for rates between $500 and $1,500.

“I believe that the last word hasn't been said about this yet — we still have two months, and that’s a long time. I absolutely believe in last-minute miracles,” Kakon noted. “Now they are considering allowing entrance only to those who present proof of a recent, negative coronavirus test. There are negotiations between well-connected Jews in the Ukrainian Jewish community and the local government. But the way it seems now, there won’t be a flood of Jews as in previous years; the number of worshippers will be limited. But even if something is worked out, a bad taste will remain. Our feeling — based on a long history of [anti-Jewish expression] in the city and the way the Uman municipality works — is that anti-Semitic overtones are mixed with the serious problems of the coronavirus crisis.”