Ahead of the US presidential elections, and on the backdrop of mysterious explosions, Israel prepares for various escalation scenarios on Iran’s part. 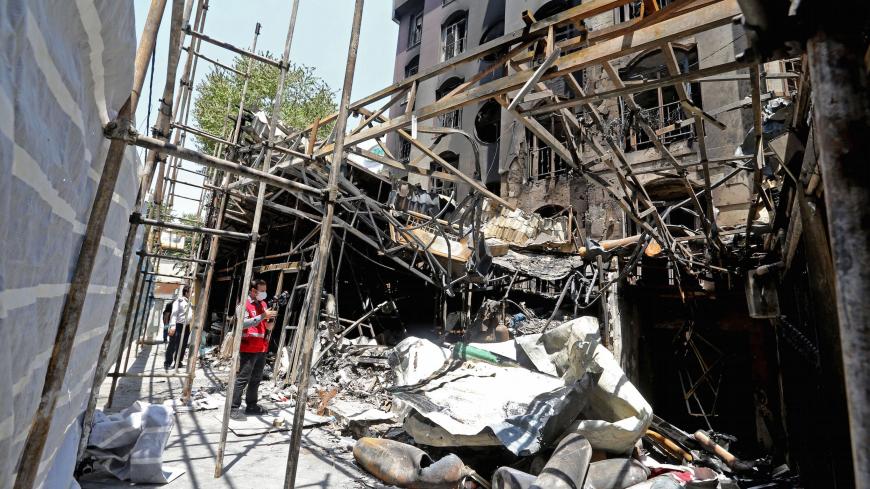 Iranian security and rescue staff work at the site of an explosion at the Sina At'har health centre in the upmarket northern neighbourhood of Tajrish in the capital Tehran on July 1, 2020. - ATTA KENARE/AFP via Getty Images

Several days after the massive July 2 explosion that destroyed the upper level of Iran’s centrifuge upgrading and uranium enrichment plant in Natanz, reports emerged in Israel that Prime Minister Benjamin Netanyahu had asked Mossad Director Yossi Cohen to stay on an additional year once his five-year term expires at the end of the year. However, "the head,” as the spy agency director is known, only agreed to a six-month extension. Shortly after, in the pre-dawn hours of July 3, Israel launched its Ofek 16 spy satellite carried on a Shavit rocket from its Palmachim military base. The satellite significantly enhances Israel’s ability to track events around the world, in particular Iran. Its particularly sophisticated camera enables the identification of items as small as 50 centimeters (19.5 inches) from a height of up to 450 kilometers (280 miles). Ofek 16 joins six other Israeli reconnaissance satellites orbiting earth and transmitting real-time data on developments around the world.

Intelligence officials believe Iran is now reassessing what they dub its “strategic patience policy.” The Iranians themselves admit it. A commentary on Iran’s state-run IRNA news agency said, “Iran so far has tried to prevent intensifying crises and the formation of unpredictable conditions and situations.” However, it continued, “the crossing of red lines of the Islamic Republic of Iran by hostile countries, especially the Zionist regime and the United States, means that strategy … should be revised.” It now appears that the Iranians are in discussions on recalibrating their course, indeed. They are no longer convinced that their famed patience serves their ongoing military nuclear ambitions and the tense wait for the results of the November US presidential elections.

The series of mysterious explosions in Iran began in late June with a blast at the weapons manufacturing facility in Parchin. It was followed by reported sabotage at a Tehran area hospital and then by the main event, the blast at Natanz that sparked a heavy fire and destroyed significant sections of the aboveground facility at which Iran was manufacturing sophisticated IR-6 and IR-8 enrichment centrifuges.

Israel is closely monitoring the Iranian dilemma. “I have no doubt the Iranians are holding discussions these days about their patience policy,” former Military Intelligence Director Maj. Gen. (Res.) Amos Yadlin told Al-Monitor. According to a report in Israel, the Iranians had recently tried to plan and carry out attacks against Israeli interests, such as embassies and other targets around the world, mostly in Europe, but the Mossad, along with its Western partners thwarted these attempts. “Israel is preparing for every possible Iranian response,” a senior Israeli security source told Al-Monitor on condition of anonymity. “It could be carried out by one of Iran’s proxies, it could be carried out on an Israeli target abroad and it could also come in the shape of a cyberattack, the likes of which we already experienced in recent weeks.”

However, even an overt Iranian response indicating that Tehran had run out of “strategic patience” will not sway Israel from its declared goal of foiling by all means possible Iran’s ongoing attempts to develop a nuclear weapons capability. Western intelligence sources assess that the blast at Natanz set back Iran’s nuclear weapons race by two years. “They were about to complete the manufacture of the sophisticated centrifuges at Natanz,” Yadlin, currently the director of the Institute for National Security Studies, told Al-Monitor. “These centrifuges were supposed to greatly speed up Iran’s nuclear ‘breakout’ time. They are six to eight times faster than the old centrifuges, which operate in the underground part of that same site. Whoever was behind the Natanz attack knew exactly what they were doing,” he said. Yadlin declined to speculate on foreign reports attributing the sabotage to Israel.

Israel and Iran are engaged in what has become almost open warfare over the past two years. According to foreign reports, Israel and Iran traded cyber jabs in the past two months. Israel has indicated that Iran tried to sabotage a water distribution facility in April, but it has not assumed responsibility for the cyberattack that crippled operations at Iran’s Bandar Abbas port in May.

“In the coming months, tensions are expected to rise,” a Western diplomat who monitors these developments told Al-Monitor on condition of anonymity. “It has to do with the fact that Israel and Iran both are preparing for November, for the possibility that President Donald Trump is reelected or that Joe Biden replaces him at the White House. The Iranians are praying for Biden, hoping a Democratic president would sign an amended nuclear agreement, which they would find more favorable. Israel is also gearing up for such a possibility.”

Israel is concerned that Iran is constantly cutting its nuclear “breakout” time, meaning the time required to produce enough weapons-grade uranium for one nuclear weapon. Western intelligence sources told Al-Monitor that since Trump pulled the United States out of the world powers’ deal with Iran in May 2018, Iran has achieved significant progress toward its goal with the enhanced centrifuges that could speed up the enrichment of fissionable material by as much as six times. These sources add that taking out these faster centrifuges at Natanz significantly sets back the Iranian nuclear program.

Israel has not assumed responsibility for the Natanz explosion nor for the other incidents that took place in recent days in Iran, but a Middle Eastern security source told The New York Times that Israel planted the bomb. The report generated fury in Israel, as succinctly expressed by former Defense Minister and Chair of the hawkish Yisrael Beitenu party, Avigdor Liberman, who urged Prime Minister Benjamin Netanyahu to “to shut [the leaker’s] mouth.” Liberman was apparently referring to Mossad chief Cohen. Nonetheless, Netanyahu is unlikely to silence Cohen and, in any case, even if there was a leak, Netanyahu himself might have authorized it.

The prime minister is under heavy siege given the deep economic crisis besetting Israel. Poll results this week indicate that public confidence in Netanyahu’s handling of the crisis, especially of the economy, has plunged sharply. The only card he has left to play is the security card, and he is going for broke. That means setting back the Iranian nuclear program in order to allow Israel and perhaps the United States to block an Iranian nuclear breakout should Iran abandon its “strategic patience” policy.