Young Israelis and the country's middle class are facing the biggest economic crisis Israel has ever experienced as the pandemic's second wave crashes. 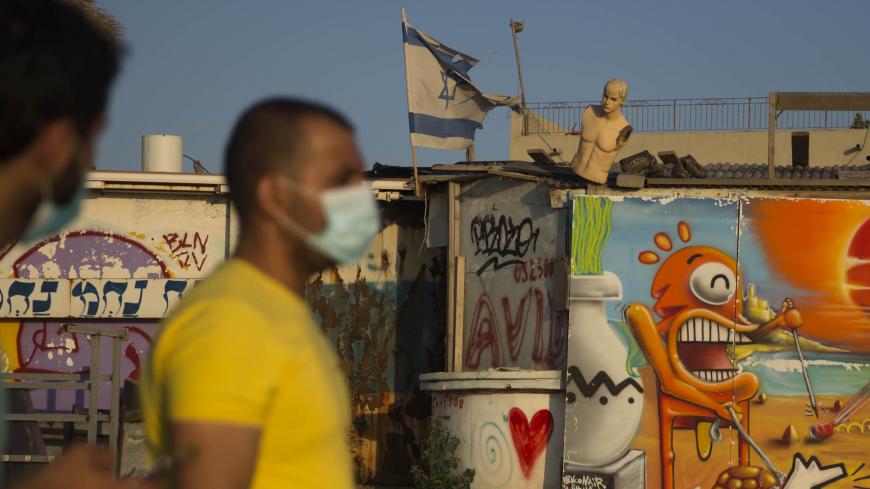 Men pass by the Israeli flag as they wear face masks on July 8, 2020 in Tel Aviv, Israel. After Israel was initially praised for its swift response to the COVID-19 pandemic, it has had to order the immediate closure of bars, gyms, nightclubs and other public spaces after a spike on coronavirus cases across the country. - Amir Levy/Getty Images

Yair Di Castro, owner of an Israeli travel agency specializing in tourism to Italy and a father of five, is waging a fight against the government on Facebook in an effort to save the once-flourishing business he established 23 years ago.

He writes piercing, painful posts about the thousands of business owners and salaried works abandoned to their fate since the government restricted travel to fight the coronavirus but failed to provide them with a security net.

On June 24, Di Castro filmed a personal appeal to Prime Minister Benjamin Netanyahu. The video went viral, making him a symbol of the collapse of Israel’s middle class in the shadow of the pandemic.

Di Castro lashed out at Netanyahu and demanded that he take responsibility for the dire plight into which he and his fellow Israelis have been plunged, just as a battlefield commander would do. “Shalom Commander Netanyahu,” Di Castro said. “We are soldiers in a war that you have described as the ‘corona war’ and we are bleeding, and you, sir, our commander, do not give a damn. … The skies are closed, and you as the commander must take care of me and of us, otherwise we will bleed to death and our blood will be on your hands.”

Almost four months since COVID-19 struck in Israel, its dramatic repercussions for the middle class are still unfolding. The lives of the rich and well-off have not changed much, and arguably nor have the lives of the very poor.

Those hardest hit are the hundreds of thousands of productive Israelis who used to go to work each morning, made a decent living, paid mortgages and lived in relative comfort who now find themselves caught in a nightmare. These are the people who account for the bulk of the working class, who make society function, pay taxes and are now on the verge of collapse.

They survived the first lockdown that Israel imposed in March, buoyed by a belief that life would soon return to normal. However, the second wave that has struck in recent weeks and led the government to restore some previous restrictions have made them realize that the worst is yet to come. They own restaurants, cafes, gyms, travel agencies, production companies and other businesses, all of which the coronavirus has upended. Israel’s unemployment rate has topped 20%, with some one million people out of work. Each of them is more than a single number. Many have families and wider circles dependent on them. In some families, both earners have been laid off or had to shut down their business.

They have been protesting, warning for weeks that they are struggling to keep their heads above water, but the promised government aid has been a sad joke for most. Netanyahu has once again promised salvation in the form of an enhanced “corona aid package,” but the plan’s publication has been put off repeatedly.

On July 8, Netanyahu and Finance Minister Israel Katz were supposed to present it to the public, but it turned out that there were still kinks to be ironed out and red tape to untangle before it was ready for unveiling. The latest reports predict the 50 billion-shekel ($14.5 billion) relief package will be brought to the government for approval on July 12 and to the Knesset the following day for speedy enactment. The money is supposed to provide a safety net for both business owners and salaried workers until June 2021.

Meanwhile, public mistrust of the government is growing, as is a sense that something is very wrong in its handling of the crisis, especially in light of reports from Europe and the United States about generous government handouts and aid to those affected by the epidemic.

Netanyahu faced despairing, angry business people in an emotional July 7 Zoom event. The parts of the session made public illustrated the disconnect between the government — Israel’s largest and most bloated ever — and the existential distress experienced by hundreds of thousands of families.

In trying to assuage some of their anger, Netanyahu publicly reprimanded the head of the Israel Tax Authority, who also took part in the teleconference, demanding that he find a way to get the money to those requesting it immediately. Netanyahu then went on to blame treasury officials and bureaucrats, further fueling criticism. Netanyahu has been prime minister since 2009, say his critics, and has enjoyed sufficient authority to get things done.

He has spent his political capital with the public. The social media platforms he is such a fan of have become a cruel mirror. Wrenching testimony by Di Castro and others reflect the government’s failure to address their needs and the grim future ahead for younger Israelis — who make up a large part of the furloughed and laid off — and the middle class.

Media outlets are running stories of 20- and 30-somethings unable to pay rent and forced to move back in with their parents. Some have moved into trailers and others will have to sell their homes if they default on payment of the hefty mortgages they took out in better times.

Public anger at the government has been further fueled by public spending on new ministries, appointments and offices in the so-called “unity government” ostensibly formed to deal with the coronavirus crisis. Lawmakers who busied themselves for hours on June 26 debating tax credits for Netanyahu to the tune of some million shekels further exacerbated public anger.

For decades, the 1973 Yom Kippur War has been a symbol of the ultimate failure by arrogant, blind leadership that failed to prepare and ignored warning signs. More than 3,000 Israeli soldiers paid with their lives for the failure and thousands more with their physical and mental health. The trauma was so massive that it led the opposition Likud Party to power in 1977 and swept aside the Labor administration that had built and led the state for almost 30 years.

Life in Israel 2020 will not go back to the way it was. Many will be left destitute and some in politics will pay with their careers. The anger and discontent may give rise to a change in leadership and perhaps of the economic system. When and how is hard to say, but there is no doubt we are staring down a tectonic shift.