Calling of witnesses in Netanyahu's trail fixed for January 2021

The Jerusalem District Court decided that the next phase in Prime Minister Benjamin Netanyahu’s trail will take place in January 2021, with witnesses called to the court three times a week. 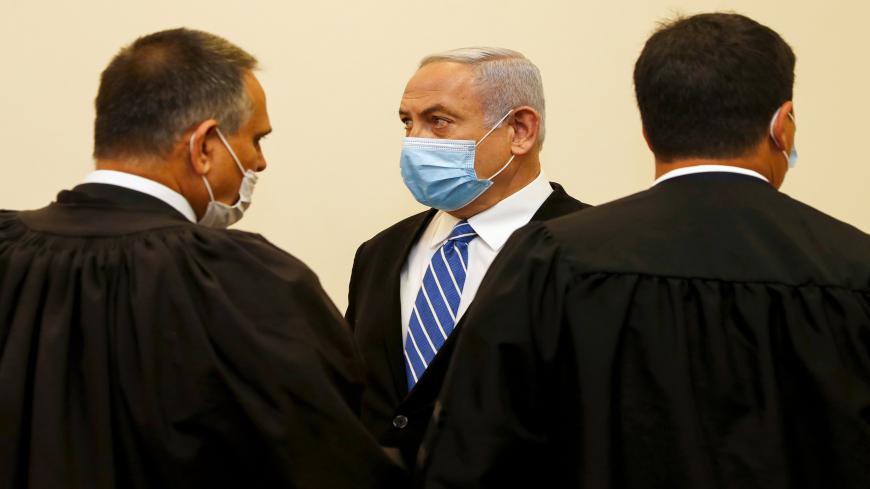 Israeli Prime Minister Benjamin Netanyahu (C), wearing a protective face maks, is pictured inside a courtroom at the Jerusalem District Court during the first day of his corruption trial, May 24, 2020. - RONEN ZVULUN/POOL/AFP via Getty Images

The Jerusalem District Court decided July 19 that the calling of witnesses in Prime Minister Benjamin Netanyahu’s criminal trial will start in January 2021. The court also decided that hearings will be held regularly, three times a week.

Netanyahu faces charges on bribery, fraud and breach of trust, accusations he denies. The July 19 session was the second time the court convened on this issue since the opening of the trial May 24. Then, Netanyahu was requested to appear in the courthouse in person. His lawyers had argued that the prime minister should be exempt from attending because of the cost and security complications entailed by assuring his safety, but the judges rejected that request. Speaking in the corridors of the courthouse upon arrival to the building, Netanyahu then slammed both the police and the prosecution and accused them of attempting to topple him, stating, “When there is a strong right-wing leader like me, everything is permitted to bring him down. This is an attempt to overthrow us.” At that initial May 24 hearing, Netanyahu’s lawyers obtained a first victory by delaying the court hearing on the date of the witness calling for two months, to the July 19 hearing.

This time, however, went differently, as Netanyahu was not requested to appear in person. The hearing focused on fixing the date for starting to call in witnesses. Netanyahu’s lawyers were hoping to postpone this phase at least until mid-2021 or even later next year, but the prosecution insisted on calling the witnesses much sooner, in the coming weeks. One of Netanyahu's lawyers, Yossi Segev, said in court that it will be hard for him to face a masked witness and see if he or she is indeed telling the truth. The judges rejected Segev’s argument, saying they would continue convening even during a lockdown. Finally, the decision by the court for January 2021 was a compromise for both sides.

Netanyahu has been facing an increasing number of demonstrations lately, targeting both his management of the coronavirus crisis and his indictment. On July 14, thousands of protesters demonstrated outside Netanyahu’s Jerusalem residence, calling on him to resign over his indictment on corruption charges. Several protesters were detained by police for rioting after the demonstration.

On July 18, two more demonstrations took place. One in Tel Aviv, blaming the government for failing to confront the coronavirus-induced economic crisis, and one in Jerusalem against Netanyahu and his corruption trial. On July 19, Netanyahu tweeted in reaction, "The cat is out of the bag. The flag of the Palestinian Authority at the left-wing demonstration organized by [former Prime Minister] Ehud Barak. … Shame on you."