Iraq's prime minister has prioritized helping the displaced, but efforts to restore them to their homes are still hindered by political disagreements, a lack of funds and the absence of infrastructure and services. 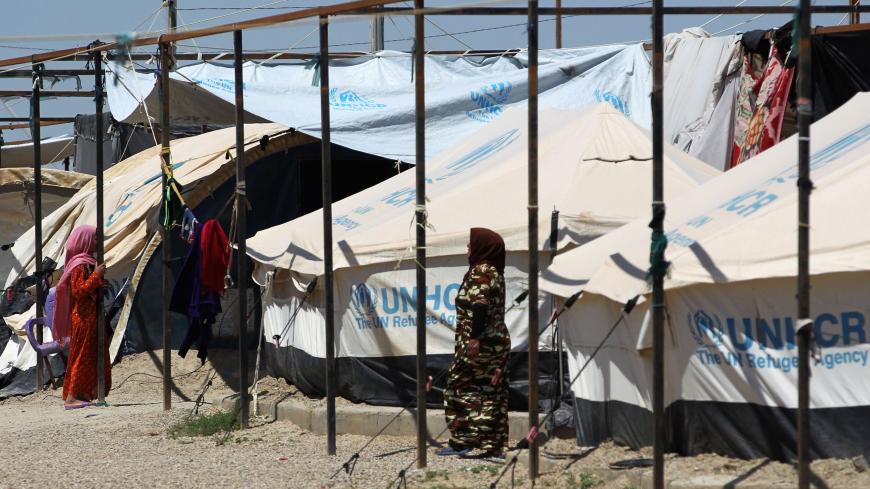 Iraqi Minister of Immigration and Displacement Evan Faek Jabro announced on July 8 that her ministry will resume returning displaced people from Turkey's Akda camp to Iraq. The returning operation had been stopped after the COVID-19 lockdown. However, it is unlikely that they return in the near future due to the ongoing pandemic challenges and economic crisis, not to mention the security decline.

The next day, during an inspection tour of the camps in Karbala province in central Iraq, Jabro noted, "Many families refuse to return to their home districts and wish to settle in the areas to which they were displaced.”

In the Kurdistan region, Mohammed al-Bebawati, the representative of the Ministry of Immigration and Displacement in Duhok, told Al-Monitor that "some families have returned to Sinjar district. He noted, however, that some Kurdish families refuse to return to Sinjar as members of the Kurdistan Workers Party [PKK] and other Iraqi armed factions are present there and the conflict scares the residents.”

The director of the Immigration Department at Babylon province, Hafez al-Shujairy, told Al-Monitor, “One of the reasons why the displaced Iraqis are not returning home is the destruction of their homes and their inability to pay the rent once they return to their home districts, not to mention the lack of job opportunities. Back in the camps, their lives are easier, as water and electricity services and food were provided.”

Shujairi pointed to IDPs in Babylon province who refuse to return to their home districts because of the health crisis caused by the spread of the novel coronavirus. “The displaced Iraqis prefer to stay in the camps, which are being sterilized and sanitized by the ministry.” He added that in other areas, security reasons are a key factor in the displaced residents’ decision to return. In Jurf Sakhar in Babylon, fierce fighting erupted between Iraqi security forces and Islamic State members, displacing hundreds of residents. “Their return today is mainly subject to security considerations.”

Iraqi Prime Minister Mustafa al-Kadhimi vowed June 10 to end the suffering of the displaced people while visiting the camps in the northern province of Nineveh.

The head of the Ministry of Immigration's information office, Saif Sabah, told Al-Monitor that the ministry is keen to ensure the voluntary return of displaced Iraqis to their home districts. He expects a massive return when the coronavirus crisis ends and when public services and job opportunities are provided.

“The ministry has no plans to settle the displaced in the areas to which they have been displaced,” he said. “Its policy is to encourage local governments in the liberated areas to quickly provide an environment that offers services and security to persuade the displaced to return home.”

Abed al-Zahra al-Hindawi, a spokesperson for the Ministry of Planning, told Al-Monitor, “The displacement issue is still putting pressure on the government, especially in light of the health and financial crisis.” He revealed that the ministry plans to begin with unifying national and international efforts to speed reconstruction and ensure stability in the liberated areas, allowing the displaced people to return to their home districts, especially those who have been living in camps. Efforts to achieve social peace will involve broad reconciliation programs between societal groups and health and services will resume for the displaced populations.

Hindawi continued, “Care and attention should be accorded to the camps in light of the refugees’ inability to return home under the current circumstance. This consists of providing basic life requirements and health and public services.”

He said, “The ministry is communicating with the international community and United Nations organizations with a view to obtaining more support for reconstruction plans and providing financial assistance to secure a better life for the displaced.”

Hindai pointed to the decision by Minister of Planning Khaled Batal Al-Najem to allocate a portion of the Social Fund for Development to support the IDP camps.

Other factors weighing in on the return decisions of the displaced include fear of tribally based violence against the displaced from among the families or relatives of IS members.

Al-Monitor talked to lawmaker Alia Nassif, who said, “Political forces are using the issue of the displaced as a political and electoral trump card." She note that the return of the displaced is linked to the electoral objectives of Iraqi parties, especially the Sunni forces that have exploited the issues in the previous elections.

“All promises made by the parties to facilitate the return of the displaced and prepare their home districts for their return by offering services and infrastructure are mere slogans," Nassif said.

Raad al-Dahlaki, the head of the parliamentary committee on immigration and displacement, seems hopeful. He discussed with Al-Monitor his meeting with the prime minister on the matter. “Kadhimi expressed the government’s willingness to provide the means for the return of the displaced to their home districts and settle the issue of the displaced as soon as possible.”

But Dahlaki warned against "forcing the displaced to return," saying he expects the issue to be settled within a year “if the government succeeds in rebuilding the war zones from which the people fled.”

Meanwhile, the financial crisis that prevented the delivery of financial aid to the displaced, the exploitation of the issue by political parties in their power struggles and the money siphoned from the funds allocated to the displaced through corruption still hinder the return of Iraq’s IDPs.