The crisis of the displaced within Iraq has become a tool in the hands of political parties exploiting it for advantage in the upcoming election. 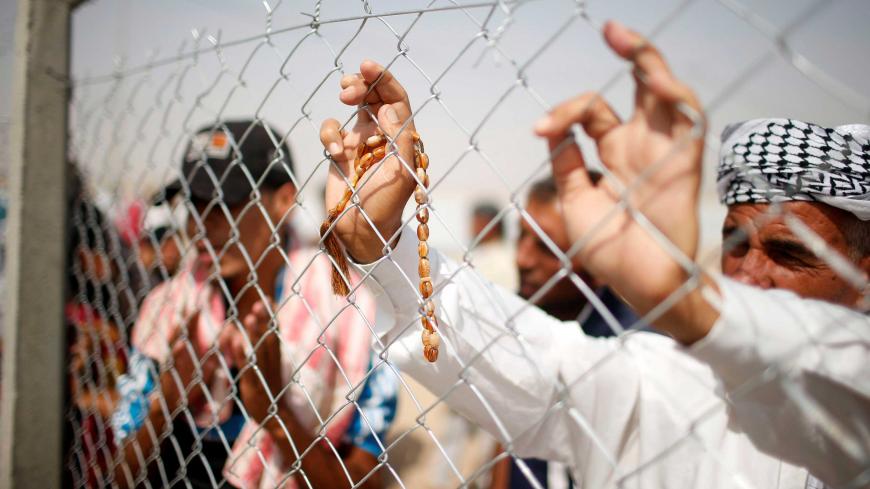 A displaced Iraqi man touches the fence as he waits for supplies at Hammam al-Alil camp south of Mosul, Iraq, July 29, 2017. - REUTERS/Suhaib Salem

Iraqi Sunnis who were displaced by the Islamic State (IS) could now be forced to move again, this time as pawns of political maneuvering by parties seeking an advantage in the upcoming provincial elections. The issue may be moot as far as the elections go, however, as other obstacles are likely to delay the vote, currently set for May.

More than 3.2 million Iraqis remain displaced within the country, according to Refugees International, and most of them have been displaced since 2014, when IS began making major gains in the country.

The National Forces Alliance political party, which represents Sunnis, says it will accept holding Iraqi elections on time as long as the "internally displaced" citizens are able to return to their homes in time to vote. But recent reports show some people are being forced to return prematurely, allegedly so elections can be held on time.

The US Embassy in Iraq confirmed these reports in a statement issued Nov. 27 and said that “forcing the displaced to return before they are ready puts their interests and safety at risk and may lead to their displacement again.”

The Iraqi Ministry of Displacement and Migration said it was not concerned about the accusation; it issued a press statement Nov. 28 saying it had not forced any displaced person to return to the areas liberated from IS.

But Eid Ammach, spokesman for the Anbar provincial council, said in a press statement the same day that “hundreds of displaced families have been forced to return to their areas of origin in Fallujah without prior notice.”

In light of these conflicting reports, Abdul Rahman Alloizi, a parliament member representing Ninevah province, told Al-Monitor, “There is no dispute that the displaced are being used for electoral purposes, as the parties calling for their fast return and those rejecting the return" both stand to benefit from their stances. Even so, Alloizi believes “the Iraqi government is seriously seeking the safe return of the displaced.”

But he added, “The Kurdish forces in the Kurdistan Region are forcing the displaced to accept specific political [conditions]." For example, there were several reports that Kurdish officials pressured refugees to vote in favor of the independence referendum in September. "These forces are also hindering the return of the displaced to their Arab areas, in order to maintain the state of chaos that [the Kurds] are benefiting from on the political and electoral levels.”

Dozens of displaced people in the Tuz Khormato district in the north, which is witnessing a conflict over influence between Arab forces and Kurdish forces, took to the street Nov. 26, demanding their return to their areas of origin be expedited.

Complicating the situation, some people who returned to their villages were rejected by their neighbors because their family members allegedly had worked with IS. Those people were forced back to the camps again, Alloizi said, citing the return Nov. 28 of 50 displaced families.

Maj. Gen. Mahmoud al-Falahi, a commander of Anbar Governorate Operations, announced Nov. 28 that 5,000 displaced have returned to their liberated areas in the Anbar province and other provinces.

Abdul Aziz al-Zalimi, a member of the Sadrist al-Ahrar parliamentary bloc, told Al-Monitor, “The Sunni forces constitute an important player in the issue of the displaced’s return, as the majority of displaced people are Sunnis.”

"The displaced are weak and divided, and they will vote for whoever offers them help."

He added, “The displaced are weak and divided, and they will vote for whoever offers them help. Some forces want their prompt return and [are assuring the displaced] that it will be done easily; other forces are offering them benefits" to remain in the camps and are playing on their fears that their houses have been destroyed and that the once-occupied areas will lack security and the streets will be booby-trapped.

Zalimi continued, “In both cases, these forces are seeking to secure votes.”

He went even further and said, “The Shiite factions that participated in the liberation of Sunni areas now enjoy popular support. The Sunni forces that cooperated with these Shiite factions [and remain in the area] have thus gained more popularity. The traditional Sunni forces are concerned about this, and some of them are forcing the displaced to return fast to their areas."

Jassem al-Moussawi, a political writer and analyst and head of the Media Monitor Center, told Al-Monitor that the different agendas over the displaced are due to “administrative corruption.”

“Some are making financial gains from the displacement issue, and it is in their interest that the phenomenon continues," he said. “There are forces eager to secure the return of the displaced and ensure social stability, which will affect the election results in the coming period. Other forces are controlling the [displaced] camps and working on keeping the displaced there to gain their loyalty and secure their votes.”

He added, “Many traditional Sunni forces are concerned about the stability in the Sunni provinces, as they have failed to achieve security and provide services.”

It seems clear that the displaced issue has now become part of a political game. United Nations envoy for Iraq Jan Kubis said Nov. 22 that “the elections in Iraq cannot be held, as the situation is troubled and Sunnis are displaced.”

Kubis backtracked on his position less than a week after he visited the Shiite authority in Najaf, stressing the need “to commit to the scheduled dates of elections,” even though the situation of the displaced hasn't changed.

Nahla al-Hababi, a member of parliament’s Displacement and Migration Committee, told Al-Monitor, “Political forces are spreading their political campaigns among the displaced to gain their support, namely in Mosul, Anbar and areas under Kurdish control.”

She called on the government “to form a special committee for the displaced whose goals would be to meet their demands away from the political forces’ influence."

This is especially true as parliament, which already has a lot on its plate, is still struggling with an elections bill that needs to be passed by Dec. 15. The legislative and provincial elections are being held together, so delaying one would delay the other. Parliament must either approve the elections bill, negotiate a behind-the-scenes deal based on the current electoral law or agree to postpone the elections. Another major controversy also needs to be settled: The Iran-backed Popular Mobilization Units and their mostly Shiite factions want to participate in the elections, and provincial councils are arguing over disputed Kirkuk province.