Has political crisis in Iraq's Anbar reached a dead end?

As the political crisis continues in Anbar province, the upcoming council election has been postponed and the displaced do not receive enough support from the local government to return to their homeland. 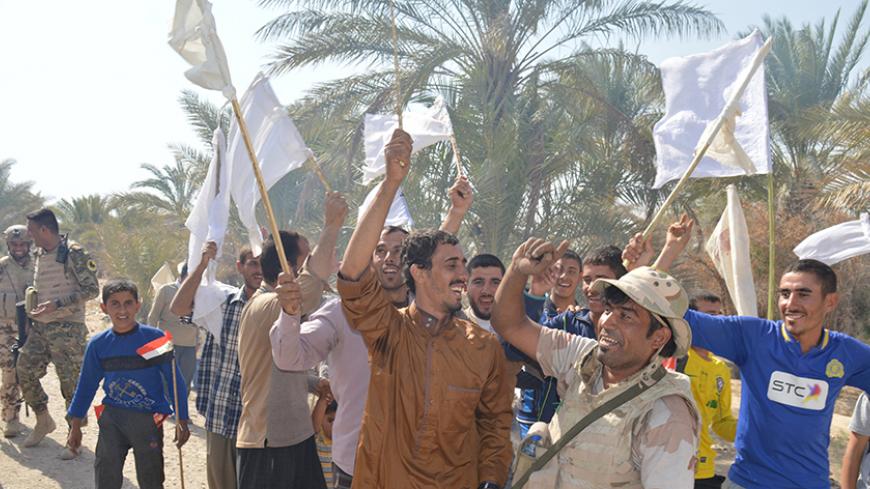 Civilians celebrate with Iraqi army soldiers after returning to their homes in the town of Hit in Anbar province, Iraq, Oct. 10, 2016. - REUTERS/Stringer

BAGHDAD — The political crisis in Anbar province has reached its peak with the vote of Anbar’s provincial council on the dismissal of the council’s head, Sabah Karhut, and the appointment Nov. 26 of Hamid al-Alwani as its new president.

After the election of the new president, the council reneged on its decision to sack Gov. Suhaib al-Rawi, as a result of political leverage and a decision by the Iraqi judiciary.

On Aug. 29, the council had dismissed Rawi, but he objected to this decision and did not relinquish his position until the court decided to revoke the dismissal decision Nov. 14. As a reaction to the court’s decision, the council decided to freeze Rawi’s financial powers Nov. 15.

The council’s decision to renege on the dismissal of Rawi cannot be seen as a decisive one, as the problem’s dimensions are complex. The council has been plagued by a great divide between the Reform bloc and the Islamic Party, of which Rawi is a member. The Islamic Party is supported by al-Hall (Solution) bloc, which is led by Jamal Karbouli and calls for the dissolution of the council. The Reform bloc includes 17 council members (out of 30) from two other blocs, the Loyalty to Anbar bloc and Al-Arabiya bloc, supported by Sheikh Abdul Latif al-Hamim, the head of the Sunni Waqf, and Sheikh Ahmad Abu Risha, the head of Iraq’s Awakening Conference. The Reform bloc is seeking to dismiss Rawi.

The local elections that were scheduled to be held in April 2017 were the much anticipated solution to this complex issue. However, the three authorities — the president, prime minister and parliament speaker — agreed Nov. 11 to postpone the local council elections and hold them at the same time as the general parliamentary election in 2018. This has placed the different political parties in a position of ongoing struggle without any sign of a solution for the ongoing conflict in sight.

Hamed al-Mutlaq, a member of parliament for the Anbar governorate, told Al-Monitor, “Anbar needs to hold the elections on the planned date despite the parliament’s decision to postpone the elections across the country. We will submit this proposal to all political blocs.”

He added, “The elections are the best solution to end this dilemma and ensure a smooth and democratic change. The reason for the late return of the displaced and the start of the reconstruction process is due to the sharp political differences and the lack of trust among the different parties in the governorate.”

On June 17, Iraqi forces announced the liberation of Fallujah, the Islamic State's (IS) most important stronghold in Anbar. However, the border town of al-Qaim remains in the clutches of IS, which the terrorist organization now calls the "Euphrates state." While the Iraqi forces headed to the north for the liberation of Mosul, IS militants undertook several terrorist attacks in Fallujah and other places in Anbar.

Most of the displaced families have not been able to return to Anbar because of the slow pace of the reconstruction and the reinstatement of public services.

Rajeh al-Isawi, a member of the Anbar local council, said that Sunni leaders and tribal sheikhs (whom he refused to name) are now in Turkey and Jordan, and “are the reason behind the political stalemate causing a delayed return of the displaced, as they are seeking to get hold of power and the funds allocated for the reconstruction process.”

Isawi told Al-Monitor via telephone, “Freezing the financial powers of the governor is enough proof of some parties’ unwillingness to move forward on the path to bring back normal life to Anbar and the return of the displaced persons.”

He added, “Dissolving the council and holding early elections is the solution to the current political stalemate. However, the parliament turned down this proposal. Some of Anbar’s tribal sheikhs are seeking to hold a reconciliation conference in the governorate, but we do not expect all the parties to answer this call.”

On Nov. 16, in a statement on the decision to freeze his financial powers, Rawi said, “We call on everyone not to be dragged into the political conflicts, which brought nothing for our people but harm at the humanitarian, security and economic levels.”

Rawi also renewed his call to the Anbar council to rise above personal differences and advance the best interest of the governorate and its people by “joining hands to work for one single goal: Anbar.”

In contrast, the Reform bloc in the council continues to insist on freezing Rawi’s powers and on the need to dismiss the Islamic Party and distance it from power.

Azzal al-Dulaimi, a member of the Reform bloc, told Al-Monitor, “Parliament Speaker Salim al-Jabouri stands firm with the decision to keep Rawi in his position as the governor of Anbar because they both belong to the Islamic Party.”

Dulaimi said that his bloc believes that “the Islamic Party has been the main reason behind the economic and security problems plaguing Anbar, therefore it refuses to have this party control all official positions in the governorate.”

He added, “The decision to freeze the powers of the governor is at the heart of the provincial council jurisdiction, which is the least of the measures that could be taken now until the holding of elections that would lead to the birth of a new local government."

According to all the parties that spoke to Al-Monitor, the Baghdad-based central government and the international donors are refusing to use the reconstruction funds in light of the ongoing political crisis.

In sum, the central authorities’ procrastination in finding a solution to the crisis and maintaining the status quo will further delay the return of the displaced and weaken the local government’s ability to maintain security in the liberated areas.