What's next for Iraq's Anbar after liberation from IS

Disputes prevail over the provincial council in Anbar province, which was recently liberated from IS; the disagreements likely will delay the return of the displaced and the reconstruction process. 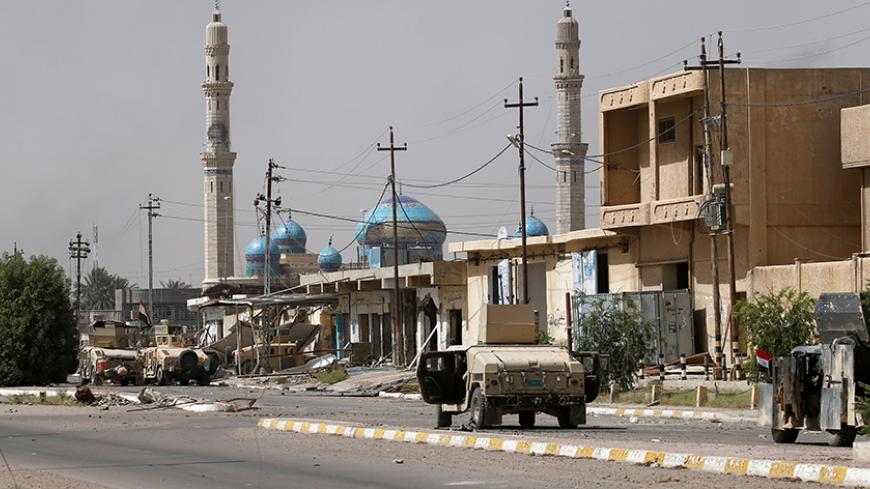 BAGHDAD — As the armed conflict with Islamic State (IS) in Anbar province ended with the liberation of Fallujah, a political conflict emerged there over posts, influence and economic interests. This started even prior to the reconstruction of destroyed Anbar cities and the return of the displaced.

Iraqi forces announced June 17 that the government complex in Fallujah, which was the last IS stronghold in Anbar, had been liberated.

Yet a conflict was triggered in the Anbar provincial council between the Islamic Party — with which Anbar Gov. Suhaib al-Rawi is affiliated and which is backed by the Solution (al-Hall) bloc and led by Jamal Karbouli — and the Reform bloc, which consists of 17 out of 30 members of the Anbar provincial council. These 17 members are of the Loyalty to Anbar bloc and the Arabic Coalition and are backed by the leader of the Sunni Endowment Establishment, Abdul Latif Hamayem, and by the head of the Sahwa Party, Ahmed Abu Risha.

Issawi added, “The reason behind the conflict is the competition for posts and to share the pie in the reconstruction of Anbar, where there is talk that the Iraqi government, the United States, and Arab and Western countries intend on providing aid for the reconstruction of the province. The conflicting parties in Anbar are seeking to obtain construction bids, which will only happen when they control all official posts.”

He explained, “This conflict involves clans supporting this or that party — depending on how close they are to it or based on their common interests. This also applies to the construction companies, which wait for the parties they endorse to give them the green light in the reconstruction process.”

The Solution bloc demanded in a statement June 15 that the Anbar provincial council be dissolved due to “its preoccupation with political disputes and partisan competition for posts, neglecting the displaced dossier and hampering the liberation of the rest of the cities.”

In a statement to Al-Mada Press on June 20, Mohammed Farhan, who is a member of the bloc backing the governor, accused the Reform bloc of "wanting to bring back Jassim al-Halbusi, former head of the Anbar provincial council, to office.”

Halbusi, who heads the Reform bloc, is the former head of the Anbar provincial council. He was dismissed on Aug. 16, 2011, due to his mismanagement and abuse of his post, the dismissal decision said.

Farhan, a member of the Anbar provincial council, said, “It’s been three years that Anbar has not received the funds for the reconstruction. The entire budget is used for the war and displaced.”

Farhan said the Reform bloc members “left thousands of displaced from Anbar province without shelter, while working to have access to posts and seeking to gain the money coming from donor countries and organizations for the reconstruction of the province.”

Reform bloc parliament member Abdul Rahman al-Luwaizi told Al-Monitor over the phone, “The Anbar provincial council Reform bloc’s objective is to end the monopoly of political Islam and the Muslim Brotherhood [the Iraqi Islamic Party] over power in Anbar. Change will be brought about through democratic means, by interrogating and dismissing Gov. Suhaib al-Rawi, head of the provincial council Sabah Karhout and other officials in the province.”

He added, “The Muslim Brotherhood is behind all of the security and political problems in Anbar in recent years, because it failed in the provincial management and reconstruction.”

The political conflict in Anbar seems to have reached a peak between the Reform bloc on the one hand and the Islamic and the Solution bloc on the other. This would hinder the reconstruction process and the return of the displaced to the province, particularly in case the provincial council and its leader are dismissed or if early elections are held. At the same time, the post-IS era in Anbar requires that the local government deal with the federal government and international donors in the absence of accusations of corruption leveled by rival parties in Anbar.

The conflict will certainly not be limited to Anbar. The Iraqi parliament has the power to dissolve the Anbar provincial council. It is up to parliamentary blocs to discuss the reasons for the dissolution and decide on whether to keep the situation as is — by rejecting the dissolution, which implies a triumph for the Islamic Party and the Solution bloc — or to agree to dissolve it and set a date for early elections, which the Reform bloc seeks to achieve.

Under such circumstances, the reconstruction process of the distressed city is not expected to be launched anytime soon, not to mention the displaced returning to their homes.