Iran's supreme leader to Iraqi PM: Iran does not interfere in Iraq-US relations

During Iraqi prime minister's trip to Iran, the two countries emphasized on building a constructive relationship based on mutual respect and national interests. 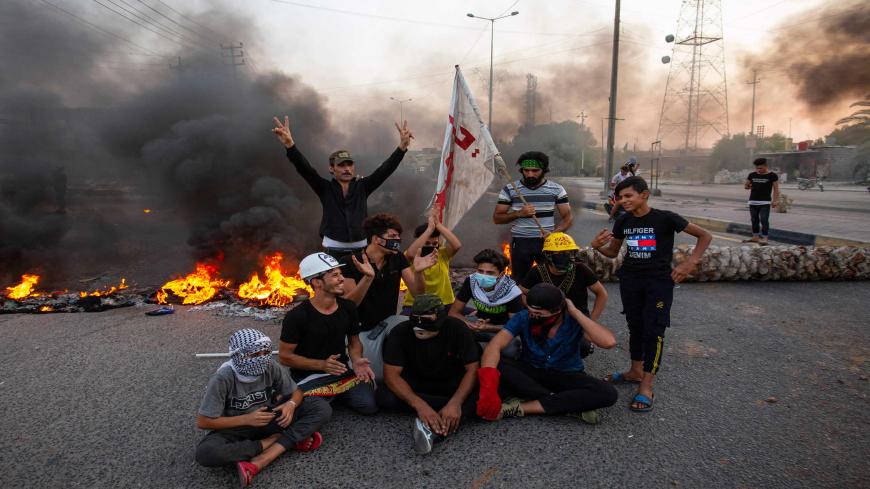 Demonstrators block a road during a protest in the southern city of Basra, as protesters gathered to denounce a lack of electricity and public services, Iraq, July 14, 2020. - HUSSEIN FALEH/AFP via Getty Images

“The relationship between Iraq and the Islamic Republic of Iran is not just a matter of having 1,485 kilometers [923 miles] of common borders, but it is rooted deeply in a long history of cultural, social and religious interactions,” Kadhimi said during a joint press conference with Rouhani.

Rouhani affirmed that the two countries have agreed to expand the trading relations to $20 billion and to move forward with many infrastructure projects, including connecting Iran's railway to the railway system of Iraq through the Shalamcheh-Basra railway, and cleaning and dredging Shat al-Arab river in the southern province of Basra.

The railway link will allow Iran to gain access to the Mediterranean Sea via Iraq and then the Syrian railway system. The Shat al-Arab project is also a strategic project for the two countries as it will allow large ships to enter this water corridor and access internal ports, which would boost the two countries' trading with the world.

In the same line, Kadhimi confirmed that Iraq wants to build a constructive relationship with Iran, affirming that the relationship between the two countries must be based on principles of mutual respect and particularity of each country and to not interfere in each other's internal matters.

The two leaders both emphasized Iraq's role in preserving and improving security in the region, highlighting the necessity of working together to deescalate tensions.

“We are keen to avoid getting involved in any regional axis and we do not want to be a source of threat to any of our neighbors,” Kadhimi noted.

He also met with Iranian Supreme Leader Ayatollah Ali Khamenei. Khamenei’s approach was also in line with Rouhani's discourse, focussing on respecting Iraq's sovereignty and to not interfere in its neighbors internal matters.

“Iran does not interfere in Iraq-US relations,” Khamenei said. “Iran wants a strong, independent Iraq with full territorial integrity and internal harmony. Iran is certainly against anything that weakens the Iraqi state.”

It is clear that Iran is changing its discourse and approach toward Iraq after the assassination of its top commander Qasem Soleimani in January.

The wave of protests in Iraq has shocked the Iranians who believed that Iraq had come under their full influence, at least the Shiite part of the country. However, the protests are taking place in particular in the Shiite areas, with the main theme of the rejection of Iranian interference in Iraq's matters.

The protesters see Iran's role in Iraq through a bunch of notorious militias and Islamic political parties that prioritize Iran's interest over the Iraqi national interests.

The selection of Kadhimi from outside of this camp provides an opportunity for Iran to change and reorient its policy toward Iraq.

The first sign of this change appeared when Iran replaced the Islamic Revolutionary Guard Corps' Quds Force with various diplomatic apparatuses in dealing with Iraq. From 2003 until the assassination of Soleimani, the Quds Force was in charge of dealing with Iraq completely. However, Iranian diplomats — including the Ambassador to Iraq Iraj Masjedi, Foreign Minister Mohammad Javad Zarif and Secretary of the Supreme National Security Council Ali Shamkhani — have been meeting Kadhimi regularly.

By inviting the Iraqi prime minister, Iran's changing discourse becomes apparent, which has been received positively by the Iraqis.

However, practical steps are needed, too — the first and most important one is curbing the pro-Iran militias' ambition and illegal activities. Armed militias have been firing rockets at foreign diplomatic missions and Iraqi state facilities continuously during the last few months. They are refusing to obey the prime minister's orders, and even sometimes criticize harshly the commander-in-chief of the Iraqi armed forces.

Iraq is seeking to recast its ties with Iran based on sovereignty and mutual respect. That means Iran backing off from its support of armed groups outside of Iraqi government control. Kadhimi is also making clear that Iraq should not be a battleground between the US and Iran, and that Iraq can be a hub for good relationships with all its neighbors.