Iran and Iraq transportation ministries signed a document setting a roadmap for implementation of Basra-Shalamcheh railway connection, which should boost economic activity for both countries. 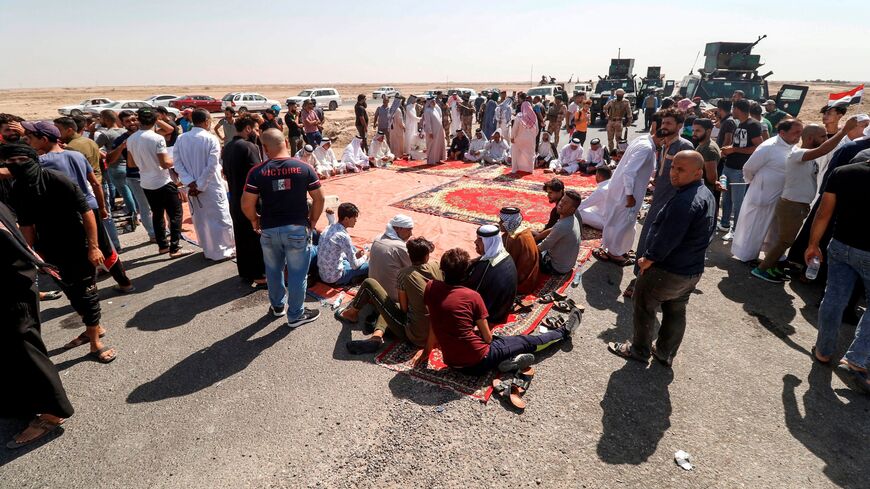 Iraqi protesters block the road leading to the Shalamcheh border point between Iran and Iraq on Sept. 2, 2018. - HAIDAR MOHAMMED ALI/AFP via Getty Images

BAGHDAD, Iraq - The transportation ministers of Iran and Iraq have signed a memorandum of understanding to build the Shalamcheh-Basra railway and Shatt al-Arab bridge.

The agreement includes a roadmap and timetable for executing the project.

According to the signed agreement that Al-Monitor received a copy of, the project will be implemented by the railway companies of both sides, and work will begin within two months. The Iranian side agreed to withdraw from a portion of land inside Iraqi territory within 20 days in order to allow Iraq to build a workshop for the project. This land has been under Iran's control since the 1980s war between the two countries.

The Iraqi side likewise agreed to acquire the required lands on both sides of the Shatt al-Arab.

Iranian Minister of Roads and Urban Development Qassem Rostami signed the deal on Dec. 26, during a four-day visit to Iraq in which he also met with President Barham Saleh and Prime Minister Mustafa al-Kadhimi. On Iranian television, he stated that he had discussed social and economic relations between the two countries, and noted that his support had led to the signing of the Shalamcheh-Basra railway agreement.

"For almost 20 years," Rostami said, "we have had numerous negotiations with Iraq for the implementation of the Shalamcheh-Basra railway, and there were even many agreements in different periods, which never reached the desired result."

In 2015, the then-Minister of Roads and Urban Development of Iran Abbas Akhoondi traveled to Abadan to start the extension of the railway to the border, from Khorramshahr to Shalamcheh which is on the border with Iraq. Now, only 32 kilometers is remained to connect the railway from Shalamcheh to the city of Basra.

The importance of this project, according to the CEO of Iran Railway, Miad Salehi, is the completion of the wide east-west corridor. "Our goal is to establish transit corridors and fix any deficiencies," he said at the time of signing the joint cooperation agreement.

The Iranian authorities have always emphasized that completing the railway will create an east-west rail transit corridor to the shores of the Mediterranean Sea, passing through Iraq to Syria reaching the port of Latakia. It can bring many benefits to the three countries.

Since Iraq is one of Iran's largest economic partners, the connection could allow Iran to increase its trade with Iraq, Syria and Europe. Iran's exports to Iraq have so far reached $14 billion a year, and Iran has set a $20 billion export target.

Despite Iran's keen interest in completing the corridor, the project has raised some sensitivities on the Iraqi side. Iraq is concerned about the marginalization of the port of Faw, and for this reason, Iraqi Minister of Transport Nasser al-Shibli stressed after signing the recent document that it was not an agreement, but a "meeting minutes" of the ministers' talks.

But these concerns do not seem to be true, and the volume of trade is so great that the port of Faw will not be marginalized.

Today, Iran is connected to many surrounding countries, such as Russia, Turkey and recently with Pakistan. The construction of the Shalamcheh-Basra railway will connect Iraq to all of Iran, as well as to Afghanistan, Pakistan, the Caucasus, Central Asia, and the Far East. In addition, Iraq may in the future be on the transit route of goods between the south and the Arab countries of the Persian Gulf region with Central Asia and Russia.

Rostami has said that although the initial agreement is to have a 50 percent stake, Iran will take a larger share of the investment if the Iraqi side agrees. He stated that this connection is very important for Iran and Iraq both in terms of transit issues and passenger movement, especially in the Arbaʽeen, when millions of Shiites travel to Iraq for visiting Imam Hussein holy shrine, and the relationship between the two countries.

He predicted that following the recent agreement, the Shalamcheh-Basra railway connection will be completed in two years.