Will Iraq lose its benefits from Shatt al-Arab River to Iran?

The recent renewal of an Iraqi-Iranian agreement on the Shatt al-Arab River stirred controversy among Iraqis, as many are concerned Iran will take over the border river. 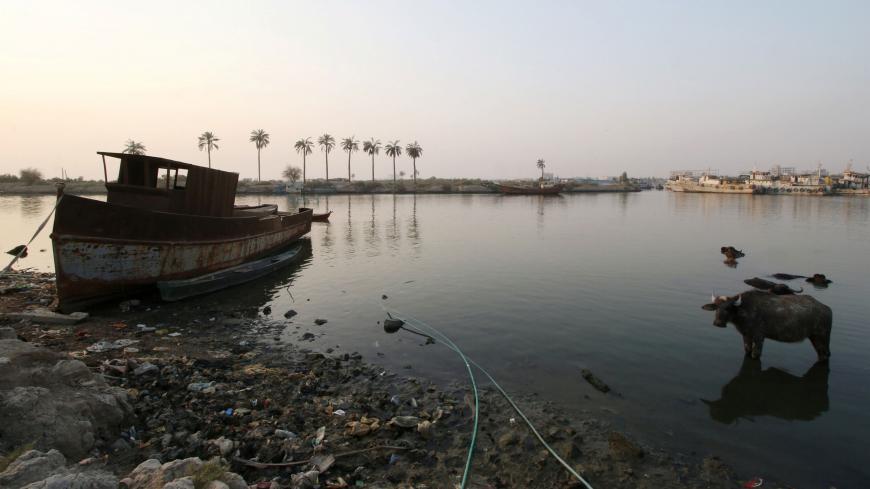 Iranian President Hassan Rouhani visited Baghdad March 11 to endorse the two countries’ renewed commitment to the 1975 Algiers Agreement regarding the shared border of the Shatt al-Arab River. The agreement has sat idle for decades, as Iraq has attempted to evade what it sees as unfair terms.

However, Iraqi Prime Minister Adel Abdul Mahdi last week signed a number of economic accords with the Iranian president that address the following issues: entry visas for citizens of both countries, raising the value of trade exchange, railway connections and demarcation of the water borders as per the Algiers Agreement, which was first signed when the shah of Iran, Mohammad Reza Pahlavi, was in power and Saddam Hussein was vice president.

But the recommitment to the agreement has sparked fears among media commentators, water resource specialists and political factions in Iraq that the country will lose out on benefits from the Shatt al-Arab.

Until the first quarter of the 20th century, Iraq had clear control over the Shatt al-Arab, with the water frontier forming a major point of contestation with Iran. Although the two countries signed more than one agreement on the matter, cooperation was quickly abandoned.

In 1975, as a result of Iran's support for the Kurdish rebellion in northern Iraq, Baghdad conceded to an agreement with Tehran, under which the two parties would divide the Shatt al-Arab. However, following an eight-year war with Iran, Iraq declared the agreement unilaterally terminated and has attempted to shirk revisiting the issue in the years since.

Rouhani's arrival in Baghdad was presaged by warnings in the Iraqi media against renewing the agreement, with claims that it is detrimental to national interests.

The Shatt al-Arab is formed by the confluence of the Tigris and Euphrates rivers in the city of Qurna in Basra province. Around 200 kilometers (124 miles) in length, the river flows into the Arabian Gulf at Faw, the southernmost point in Iraq. Depending on the current, the river ranges from 1-2 kilometers in width.

The river represents a major economic artery for Iraq, serving as a navigational channel for vessels heading to the ports of Basra via the Arabian Gulf. Chief among these is Iraqi-owned al-Maqal Port, regarded as the oldest Iraqi port on the Shatt al-Arab, alongside oil rigs such as Khor al-Amaya.

Following the outbreak of the Iran-Iraq War in 1980, the feuding parties began bombing boats anchored in the Shatt al-Arab, turning the river into a naval cemetery. Today, it is still filled with waste and wreckage, causing significant environmental pollution and disruption to biodiversity.

According to former Iraqi transport minister, Amer Abdul Jabbar, Iraq has lost approximately 2 kilometers of the Shatt al-Arab to Iran. This comes as a result of natural environmental changes; Iraq’s neglect of the region; Iranian manipulation of the course of the Karun River, which flows into the Shatt al-Arab; and the dumping of waste by both countries.

Iraqi parliamentarians Zahra al-Bajari and Dhafar al-Ani agreed that Iraq is presently in no position to engage in major negotiations on complex affairs with its neighbors, due to its incomplete ministerial Cabinet and lack of political stability.

Ani, a leader in the Iraqi Decision Alliance, said, “Iran dominates political decision-making in Iraq so any agreement that takes place between the parties will be in Tehran’s interest.” He continued, “The most effective strategy will be for Iraq to adhere to the borders that predate 1975.”

However, Ani's comments come too late. A joint statement by the Iraqi and Iranian governments indicates that the two parties will begin joint operations on the Shatt al-Arab, "to clean it with the aim of restoring the main navigation channel [the thalweg], in accordance with the aforementioned 1975 agreement and as soon as possible.”

The thalweg is the deepest point in the center of the river’s main navigation passage, located at the lowest level and extending to the sea.

Bajari, a parliamentarian for Basra province, said, “The thalweg line has changed over the years due to silt and dredging by Iraq. This is what has led to the erosion of land on the Iraqi side and an increase in the share of Iran, with its subsequent dominance over the waterway.”

Despite this, Bijari told Al-Monitor, “the return to the Algiers Agreement may revive the movement of ships in the Shatt al-Arab,” pointing out that “it is better to have an agreement than to have no agreement.” According to Bajari, aspects of the accord may nonetheless work in Iraq’s favored if they are adhered to by Iran. As she explained, “Iraq has demanded that Iran restore water flows from the Karun River, which reduces the saline belt in Basra, so Iran must implement this agreement in all its terms.”

Aoun Diab, a specialist in water resources, concurred with Bijari, observing that “international agreements cannot be revoked unilaterally and Iraq has little room for maneuver in this regard.”

Commenting on the terms of the accord, Aoun confirmed to Al-Monitor that “the agreement restores water-sharing between Iraq and Iran to the arrangements of 1975, which, if realized, will be a good thing for Iraq.”

Both Bajari and Aoun emphasized that Iraq will not lose any of its territory under this agreement. Yet doubts remain around Iran’s disavowal of specific terms that favor Iraqi interests and control of the waterway.

While Bajari did not hide her anxiety about this prospect, Ani questioned the very possibility of passing the agreement in the Iraqi parliament, given the widespread objections.

Iraqi fears of the agreement with Iran remain legitimate, especially as Iran attempts to exploit its economy to the fullest extent, possible all the more so in the shadow of America’s economic embargo on the country. At the same time, it does not want to offer anything to Iraq, whose political factions it dominates.