Iraq is planning to complain to the International Court of Justice about the drop in water flow from Iran. 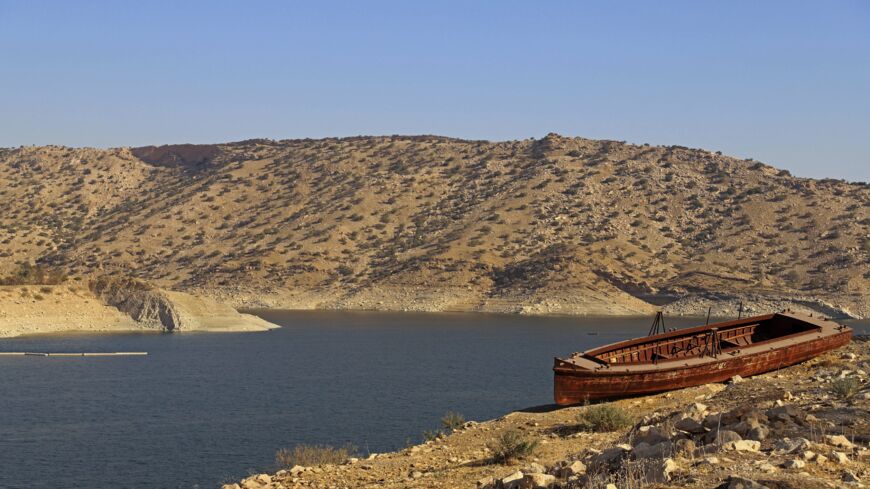 A picture taken Oct. 26, 2021, shows the Darbandikhan Dam after the water level had fallen by 7.5 meters in one year, in northeastern Iraq. Iraqi officials warned of a drastic drop in the flow of water in a river from Iran due to low rainfall and dam-building in the neighboring Islamic Republic. The Sirwan River begins in Iran, flowing to Darbandikhan Dam in northeastern Iraq before going through the rural province of Diyala and joining the Tigris. - SHWAN MOHAMMED/AFP via Getty Images

Iraq is planning to file a lawsuit against Iran for water cuts, according to Iraq's Minister of Water Resources Mahdi Rashid Al Hamdani.

Iraq has received only one-tenth of what it was receiving in the past from Iran, while water from Turkey also fell by almost two-thirds.

“The Ministry of Water Resources submitted a letter to the Foreign Ministry and has completed all technical and legal procedures for the lawsuit,” Hamdani said in December 2021.

Iran is blaming climate change and asking Iraq to understand its position, saying Iraq should follow up on the matter with Turkey instead.

Farshid Shokrkhodai, head of the Commission for Sustainable Development, Environment and Water of the Iranian Chamber of Commerce, said in a recent interview with the Iranian Labor News Agency, "Iran's water tension with other countries, including Iraq, is increasing. Although we deny the problems of climate change or try not to get involved in climate change, we are victims of it in the region."

Regarding Iraqi officials' statements that Iran is not giving Iraq enough water, he said, "Arvand is the only river that flows from Iran to Iraq; the water of the dams in the Karun River is not even given to the people of Khuzestan. That is the issue: the Arvand drought. The problem of the Iraqis is the Tigris and the Euphrates [rivers], which originate from Turkey, and Turkey has built dams [on both rivers]. This action, and the reduction of Iraq's water supply from the Tigris and the Euphrates, has caused the Arvand water shortage to show itself. The Hawizeh Marshes are also drying up on the Iranian side."

This part of his interview was somewhat a repetition of the words spoken by Iranian Fereydoun Abbasi, former head of the Atomic Energy Organization of Iran and a member of the Parliamentary Energy Commission who three months earlier on Sept. 24, 2021, had responded to Iraqi officials' threats to complain about Iran in international circles and said, "If Iraq is going to go to international authorities for noncompliance with its water rights by its neighbor, it is better to complain to Turkey, which has built many dams in its country without coordination with neighboring countries and does not allow water to flow in the Tigris and the Euphrates. This issue has affected Arvand and Karun and has caused the water of the Persian Gulf to advance at the time of the sea tide and saline water to enter the canals of Bahmanshir and Arvand rivers, and the groves of Abadan, Mino Island and Khorramshahr to dry up."

According to Abbasi, there is an agreement regarding border waters, and any country that builds a dam on the border river must also consider a share for the destination country of the river. Due to the same agreement, until 2020 it was not necessary to coordinate with neighboring countries to build the dam.

The remarks by the Iranian officials were in response to repeated concerns expressed by Hamdani, who had complained at the water security conference in Baghdad. On Sept. 22, 2021, Hamdani announced that he had planned to file a complaint with the international community in cooperation with the Iraqi Ministry of Foreign Affairs, as no agreement had been reached with Iran on joint waters. According to him, a panel of experts has prepared an eight-page report on the violations by the Iranian side, which is to be sent to the International Court of Justice. The report follows Iraq's frustration with reaching an agreement with Iran. Hamdani said he had accompanied Prime Minister Mustafa al-Kadhimi on a recent visit to Iran to meet with Iranian officials, but after an hour and a half of heated and serious talks, there was no convincing response from Iran.

Reducing the flow of water to Iraq from Turkey and Iran, as well as water pollution in the cities through which it passes, has fueled border disputes, increased water salinity and destroyed acres of fertile agricultural land. The diversion of rivers and digging of canals, especially the Bahmanshir canal near the Shatt al-Arab, have caused the Thalweg line, which defines the border between Iran and Iraq, to ​​be extended to about 2 kilometers toward Iraq. These issues have also caused some of Iraq's massive oil facilities to stretch inside of the Iranian border. In 2009, the Iranian Embassy in Iraq asked Iraq's national security adviser Mowaffaq al-Rubaye not to use the Khor Al-Amaya oil terminal, as it's part of Iranian territory.

Hamdani had stated during the water security conference that Iran would continue to insist on the 1975 Algiers Agreement and the demarcation of the border between the two countries on the Thalweg line, the deepest point in the Shatt al-Arab. He clarified that "Iraq has told Iran that the agreement does not mean changing the course of the rivers and creating and digging canals."

Hamdani had previously warned that Iran was "completely" blocking the outflow of water from border rivers into the country, causing a "catastrophe" in Diyala province. On July 11, 2021, he said that Iran had "completely" prevented the water of the Karkheh, Alvand, Karun and Sirvan rivers from entering Iraq. If the situation continued, he said, the crisis in Iraq's Diyala province would deepen.

Although Iran's blockade of water supply to Iraq from rivers flowing from Iran to Iraq has made it difficult to supply drinking water and agriculture in Diyala, it has further exacerbated geopolitical problems in southern Iraq. Baghdad is trying to gain a full share of the waters of the Tigris and Euphrates rivers by activating an agreement reached with Turkey in 2009 (amended in 2014) to prevent some of these problems. Hamdani also confirmed that there is a joint committee with Turkey based in Iraq to coordinate on the water issue, and that the Cabinet has taken executive measures to determine the share of water entering from Turkey. No such action has been taken on rivers of Iranian origin, including the Arvand.

Baghdad is hoping that taking its complaint to the International Court of Justice can persuade Iran to cooperate regarding water shares.