Iraqi Prime Minister Mustafa al-Kadhimi made his first visit to Saudi Arabia in an effort to enhance ties between the two countries. 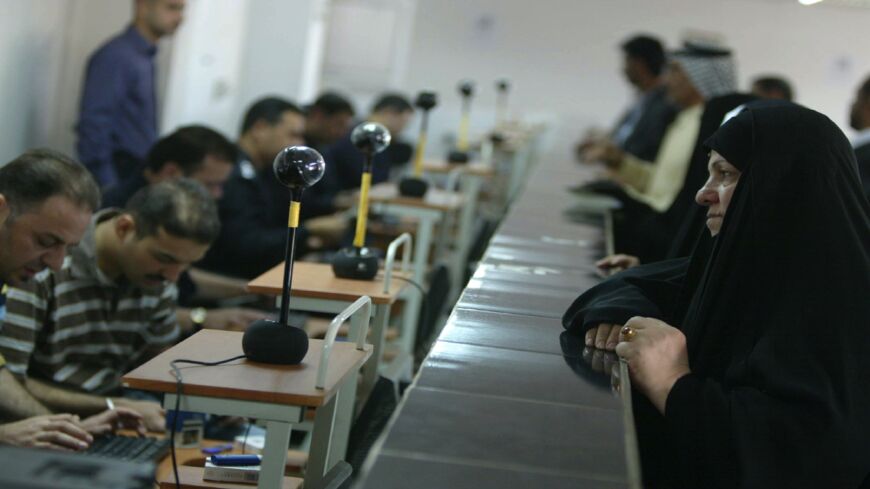 An Iraqi woman stands at passport control as she waits to have her passport stamped at the Arar southern Iraqi border crossing with Saudi Arabia on November 11, 2009. - MOHAMMED SAWAF/AFP via Getty Images

Iraqi Prime Minister Mustafa al-Kadhimi traveled to Riyadh yesterday as part of a high-ranking delegation, where he was welcomed by Saudi Crown Prince Mohammed bin Salman.

The two countries have been negotiating opportunities to enhance their bilateral relationship for some time now, and the time to implement such opportunities seems to finally have arrived.

Kadhimi and Mohammed signed five agreements on the first day of the visit, according to the Saudi-owned Al-Arabiya TV channel. The agreements involved finance, trade, economy, culture and media — details have yet to be released.

Iraq is looking for an electricity grid connection with the Gulf states through Saudi Arabia, as well as Saudi investment in agriculture and industrial farming.

Iraq reopened its Arar border crossing with Saudi Arabia late last year, which significantly increased trade between the two. The two countries also emphasized the necessity of opening more border outlets to increase trade. The Jumaima border crossing in the south of Iraq's Muthanna province is the second crossing, after Arar, that Iraq and the kingdom plan to open in the near future.

"Today, we embark on a visit to the Kingdom of Saudi Arabia to strengthen our bilateral ties and enhance regional cooperation. We will work on serving our peoples' interests, achieving stability and advancing developmental values based on what binds us," Kadhimi tweeted prior to his arrival to Riyadh.

In a meeting with Arab journalists in Riyadh, Kadhimi said the "Saudi presence in Iraq is a stabilizing factor," emphasizing that "Saudi Arabia will play a significant role in the stability of Iraq and the region."

The kingdom "has expertise in trade, investments, agriculture and industry … and the ambition is to have cooperation with Saudi Arabia at levels and figures that serve the peoples of the two countries," Kadhimi said.

Iraq is playing a leading role in reconciliation between different rival forces in the region in order to bring about stability and calmness.

Foreign policy in the Kadhimi government is based on a balanced relationship with Iraq's neighboring countries, and this requires reducing tension between rival countries.

Iraq is looking to improve its relationships with Iran, Turkey, Jordan, Egypt and the Gulf states.

Kadhimi made his first foreign visit to Iran last June, where he discussed bilateral relationships with Iranian President Hassan Rouhani. He visited Turkey last December, where the Turkish government said it is willing to help Iraq with $5 billion. Both Iran and Turkey are looking to increase trade with Iraq up to $20 billion annually.

Negotiations with Iran resulted in a possible Shalamcheh-Basra railway connection agreement last month, and Iraq-Turkey negotiations resulted in a bilateral understanding over sharing water sources between the two countries.

Kadhimi has also raised the idea of a "New East," expressing willingness to create economic unity with Jordan and Egypt. The three countries have previously met and will hold a new summit soon in Baghdad, where they hope to sign several economic, investment and trade agreements.

Iraq has been a magnet of conflict in the region for a long time due to its geopolitical position. Now, it is moving toward a bridge of peace and cooperation.

The diplomatic campaign Iraq is spearheading has had an impact on its economic status as well. The economic contact group, which consists of G-7 countries, Saudi Arabia and other developed countries, supported Iraq in its severe economic crisis.