As Iraqi PM balances ties with US, Iran and Arab states, Tehran weighs next move

Although Iran supports Iraqi Prime Minister Mustafa al-Kadhimi, there are signs it has concerns about his rapprochement with the United States and the Arab world. 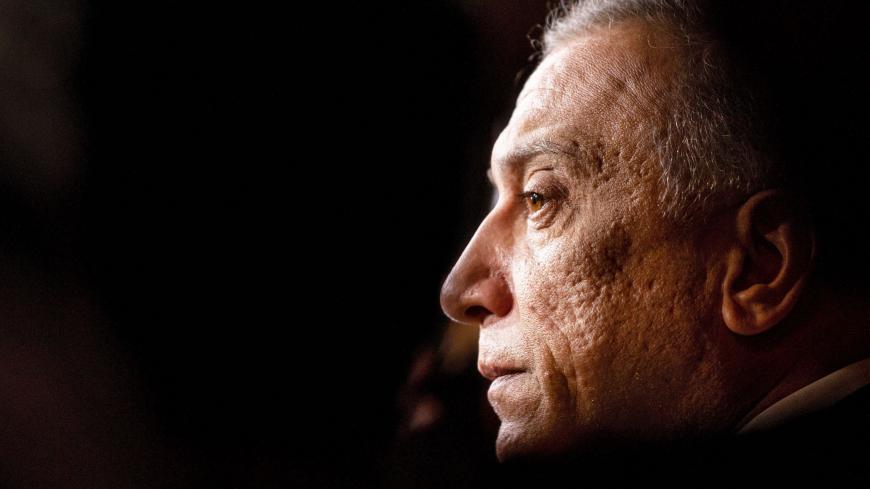 Iraqi Prime Minister Mustafa al-Kadhimi traveled in June to Iran for his first trip outside of Iraq as the country's leader, and was well received, including statements of support from Iranian officials.

His next trip abroad was to the United States on Aug. 19, followed by Jordan on Aug. 25, where he met with King Abdullah II and Egyptian President Abdel Fattah al-Sisi to discuss economic cooperation and joint security efforts.

Here too, Kadhimi received praise for deepening ties with key allies and partners.

This brings up the question: Will Iran still continue to support Kadhimi following his moves toward the United States and Arab world?

Al-Monitor met with Iranian Ambassador to Baghdad Iraj Masjedi to get his viewpoint about Iran's relationship with Iraq in light of recent developments in the region.

Masjedi said, “Bilateral relations between countries are basically internal and related to the foreign policy of each country. We do not intend to interfere in an internal matter. Iraq is our friend and brother country, and its leaders recognize their national interests better than anyone.”

However, he expressed concerns about the US military presence in Iraq, saying, “Iran believes [the US presence has] only resulted in increased insecurity, a growth of terrorism and will lead to the creation of new colonial mechanisms."

This is in line with Iranian Supreme Leader Ayatollah Ali Khamenei's views on the same issue expressed in his conversation with Kadhimi during the prime minister's trip to Tehran.

“Iran does not interfere in Iraq-US relations,” Khamenei told Kadhimi, before immediately pushing the Iraqi leader to work on ousting US forces from Iraq. “The Islamic Republic expects officials in Baghdad … to follow up on ousting Americans from Iraq because their presence sparks insecurity,” Khamenei said, advising Iran's “Iraqi friends” to realize the nature of the United States as “the enemy” whose presence “anywhere can be a source of corruption and destruction.”

Kadhimi's trip to Washington was sharply criticized by Iranian media outlets close to the supreme leader.

“How could Kadhimi want to meet with the killer of his people, Donald Trump?!” wrote Hussein Shariatmadari, the managing editor of the Kayhan newspaper, prior to the trip. Shariatmadari was appointed by Khamenei.

After the trip, Shariatmadari slammed Kadhimi for thanking the United States for its role in defeating the Islamic State and expressing Iraq's need for a US military presence to continue to confront the militant group.

Iraqi groups close to Iran also criticized Kadhimi for what they viewed as an unsuccessful trip to Washington, and for not setting a clear and fast timetable for the withdrawal of US troops from Iraq. In a parallel development, attacks against US troops have been on the rise in Iraq.

In response to a question about imposing the rule of law on a group of factions within the Popular Mobilization Units (PMU) that are taking actions against the United States in Iraq, the ambassador said this issue is an “internal matter.” He did, however, express Iran's willingness to see “security, order and reconstruction spread in Iraq."

He said Iranian support for the Iraqi government is unconditional, whether Iraq decides to allow the US troops to stay or expel them.

However, Masjedi reiterated how the Iraqi parliament voted in favor of a nonbinding resolution earlier this year to end the US troop presence in the country, and said he hopes this gets implemented very soon.

The ambassador expressed Iran's eagerness to see Iraq empty of all foreign forces, not only the Americans.

“The presence of foreign forces, including the Americans, in Iraq exacerbates the climate of insecurity, the growth of terrorism and security challenges,” Masjedi said.

He accused the US forces of turning Iraq into a battlefield with Iran, saying that the United States "openly and shamelessly assassinated our senior military commander [Qasem Soleimani], who was the official guest of the Iraqi government."

"Should such an action go unanswered?” the ambassador questioned. “Do you expect the resistance forces in Iraq, whose commander Abu Mahdi al-Muhandis was martyred, to calm down?” he asked, in reference to the PMU leader who was killed in the Jan. 3 drone strike alongside Soleimani.

The ambassador denied any type of Iranian intervention in the decision-making and activities of military and political forces in Iraq known for being close to Iran and who often call themselves “resistance forces."

However, Iraqi Foreign Minister Fuad Hussein, in a virtual panel conversation with the Atlantic Council accompanied by Finance Minister Ali Allawi, said the Iraqi government sees Iran's role in Iraq as being more than that normally seen in a typical bilateral relationship, and sought a rectification in Iraq's relations with Iran.

Hussein, who like Allawi also serves as a deputy prime minister, said that Iran can have influence in Iraq but that the decision must be in the hands of Iraqis. "We have got this problem,” he said.

The foreign minister added, “We are desperately in need for both sides [Iran and the United States] …, but on one condition, they must not make the decision for us and in this case, the Iranians are intervening more, they decide for us, they have got different positions inside our political system."

Hussein said he had attended a meeting where the Iraqi prime minister told Iranian President Hassan Rouhani, “'We want to have relations but on the basis of being equal, state to state.'"

Yet what Hussein sees as abnormal in the Iran-Iraq relationship, Masjedi views as completely normal and natural.

“Iran and Iraq, as two historic neighbors, have many things in common that have intertwined their destiny,” Masjedi said. “We are neighbors forever, so no country wants the welfare and prosperity of Iraqi people more than we do."

The ambassador said the nature of the relationship between Iran and Iraq is unchangeable. “No matter what government is in power in Iraq, the relations between the two countries are so intertwined in different areas that no government can ignore them."

He said the relationship between Iran and Iraq also involves a wide variety of economic, cultural and educational and even humanitarian aid. He said that Iran has been exporting electricity to Iraq for more than a decade and that Iran is working on building the largest Iraqi power plant in Rumaila in the southern province of Basra.

The ambassador also said that Iran is building Zawra Stadium in Baghdad as well and that Tehran has provided various forms of aid, including oxygen to Iraq during the coronavirus pandemic. He accused the US sanctions on Iran as preventing the latter from working with greater capacity in Iraq.

He said he hoped that the border disputes between Iran and Iraq get resolved soon so that the project of connecting Iran's railway to Iraq’s could be quickly completed and revive the silk road connecting northern Iran to the Mediterranean sea in Syria through Iraq.

In response to a question about Iraq's willingness to connect its electricity grid to the Gulf states, the ambassador said Iran has no objection to Iraq expanding its relationships with the Arab world; however, he said no other country can provide Iraq with the same quality of electricity as Iran.

Kadhimi spoke about a “new east” in his meeting with the Jordanian king and Egyptian president, saying, “We hope that the fraternal meeting will be a gateway to the future, serving our peoples, for a new brightness for development and prosperity, and for the consecration of the spirit of dialogue, understanding and security in the region.”

Kadhimi is showing that he is more than serious in maintaing positive international and economic relations with neighbors, the region, and the world, based on sovereignty and respect.  He knows that Iraq's success depends on Iraq as a bridge not a battlefield, and that conflicts are replaced by cooperation, even if indirectly.  This is no easy taks, given the current sharp and complex conflicts in the region, but it is the right one for Iraq.