Iran has appointed a senior Islamic Revolutionary Guard Corps official and Quds Force adviser to be its new ambassador in Iraq, raising concerns that Iran plans to strengthen Iraq's Shiite militias in the post-Islamic State era. 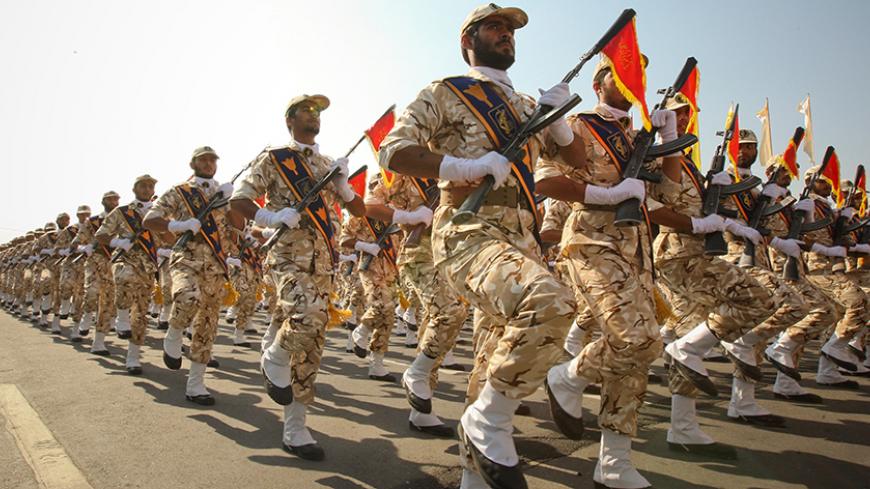 Members of the Islamic Revolutionary Guard Corps march during a parade to commemorate the anniversary of the Iran-Iraq War (1980-88), in Tehran, Sept. 22, 2011. - REUTERS

Masjedi is a prominent leader of the Islamic Revolutionary Guard Corps and serves as an adviser to Qasem Soleimani, the commander of the Iranian Quds Force. Masjedi confirmed the news himself in an official statement but did not say when he would officially assume his new position.

Saudi Minister of State for Gulf Affairs Thamer Sabhan, who served as the first Saudi ambassador in Iraq after 2003, attacked Masjedi on Jan.15, calling him “an internationally wanted war criminal.”

Faleh al-Fayyad, the national security adviser and head of the Popular Mobilization Units (PMU), was quick to reply on Jan. 22, saying, “Our relations with Iraq are not determined by other parties,” a jab at Saudi Arabia. Fayyad welcomed Masjedi as the new ambassador to Iraq and did not miss an opportunity to praise him, calling him “a brother.” “We have good memories of Masjedi and his long history of supporting Iraq. There is no doubt that he will play an important role in improving relations and defending the interests of both countries,” Fayyad said.

Haidar al-Moul, a parliament member for the Shiite National Alliance, called, albeit reluctantly, the Iraqi Foreign Ministry to vet Masjedi and to investigate whether he is a war criminal.

He classed Masjedi’s presence as part of Iran’s military expansion in Iraq. Many media outlets reported that Masjedi is working on strengthening the military and political presence of the PMU and other armed factions.

There is not much information available on Masjedi, who has been described by the Washington Institute as a "seasoned Quds Force operative." "What is clear is his reportedly deep involvement in Quds Force activities in Iraq over the past several years, many resulting in the death, injury or kidnapping of US and coalition personnel as well as the assassination of Iraqi provincial officials who did not see eye to eye with Tehran,” the article read.

Al-Monitor sought commentary from several parliament members, but all refused to comment on Masjedi’s appointment.

Homma Amin, a parliament member for the Kurdistan Alliance, called his appointment an “internal Iranian affair,” saying, “We do not have a problem with Masjedi or any other person. We are concerned about the Iraqi blocs that fear to antagonize Iran and that have yet to comment on this issue.”

According to the Kurdish Rudaw media outlet, which has ties to the Kurdistan Democratic Party, Masjedi is an intermediary between it and its rival Kurdish party, the Patriotic Union of Kurdistan, headed by Jalal Talabani.

Kurdish media outlets quoted Nazem Dabbagh, a representative of the Kurdistan Regional Government (KRG) in Tehran, as saying, “The choice of Masjedi for this position reflects the interest of Iran in Iraq and in the political parties in Baghdad and the Kurdistan Region. This step has clearly been made to serve Iran’s agenda.”

Regarding Iraq's Sunni political parties, which view Iran as a threat, Atheel al-Nujaifi, the former governor of Ninevah province and head of the Ninevah Guard, said Jan. 12, “There is no doubt that appointing Masjedi, who is a top adviser to commander Qasem Soleimani, as an ambassador to Iraq has implications that go beyond the diplomatic scope of work.”

He added, “Masjedi’s military experience and ties with the armed factions in Iraq and Syria will affect the type of relations he holds in Iraq as well as the relations between the two countries, at a time the region is getting ready to start a new chapter in the post-Islamic State [IS] period.”

Masjedi is the third Iranian ambassador to Baghdad to come from the Revolutionary Guard.

Mazen al-Zaydi, the editor-in-chief of Iraq's al-Mada, said in an interview with Al-Monitor, “All Iranian ambassadors to Iraq, appointed since the occupation of Iraq, have two things in common. First, they have Iraqi origins and were deported by Saddam Hussein’s regime in the 1970s under the pretext of having Iranian origins. Second, they all have a military background and belong to the Quds Force, which plays regional roles in Iraq, Syria and Lebanon.”

Zaydi considers this point an indication that “Iran continues to view Iraq as a confrontation line, threatening its national security. Iran is involved in the war in Syria. Thus, appointing a military ambassador goes in line with the nature of the challenges it is facing in the region.”

Masjedi’s appointment comes at a time of possible clashes between the new US administration under Donald Trump and Iran, especially in the post-IS period.

Notably, Masjedi believes that Iraq and Syria serve as a buffer zone for Iran’s security. “The hypocrite extremist groups seek to destroy the sacred Shiite shrines. IS wanted to control Aleppo and Mosul in order to wage attacks on the borders with Iran,” Masjedi said in mid-January.

Zaydi added that most of the diplomats assigned to Iraq have military backgrounds, including the ambassadors from Kuwait and Saudi Arabia. The Iraqi authorities must work to find a solution to prevent Iraq from turning into an arena for the military representatives of regional countries.