Fresh fraud allegations leveled against Iran’s powerful parliament speaker could mar his expected bid for the presidency next year, while exposing widening rifts within the conservative camp. 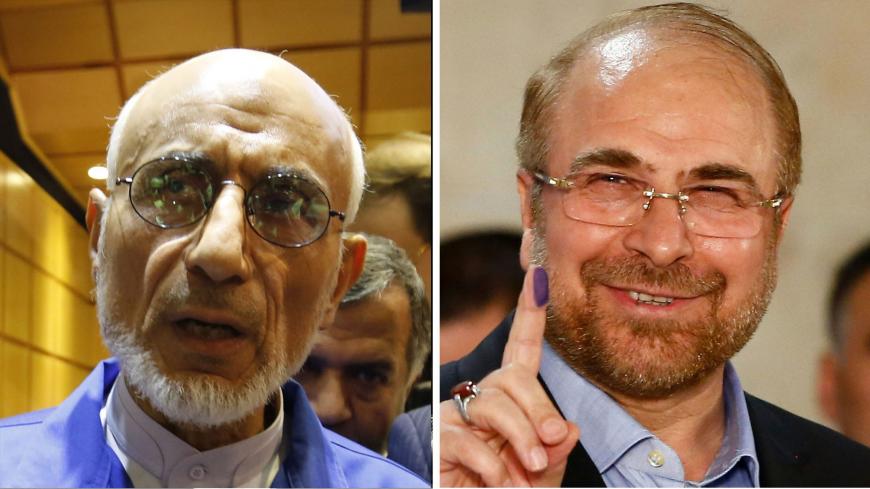 Former Iranian Culture Minister Mostafa Mir-Salim (L) is seen on April 11, 2017, while Mohammad Bagher Ghalibaf (R) shows his ink-stained finger after registering his candidacy for the May 2017 presidential election at the Interior Ministry on April 14, 2017. Ghalibaf later dropped out as a presidential candidate and Mir-Salim finished a very distant third to incumbent President Hassan Rouhani. Ghalibaf, who was then mayor of Tehran, now is the speaker of parliament, and has come under fire from Mir-Salim over corruption allegations. - ATTA KENARE/AFP via Getty Images

“He has to be constantly watched as he may commit some misconduct in any position he holds,” veteran conservative figure and current parliamentarian Mostafa Mir-Salim once said about Mohammad Bagher Ghalibaf, one of the most powerful politicians within the Islamic Republic’s ruling elites.

Earlier this month, Mir-Salim was back to haunt Ghalibaf, providing Iran’s judiciary with evidence implicating the parliament speaker in a massive bribery scheme that had been debated in 2017. Mir-Salim claimed that Ghalibaf had paid 650 billion Iranian rials (over $17 million if calculated on the market exchange rate of the period in question) to some lawmakers to drop an investigation into a separate multimillion-dollar property fraud case rooted in Ghalibaf’s 12-year tenure as the mayor of Tehran.

A probe into the scheme in 2017 could have shed light on multiple reports alleging that Ghalibaf and his close aides had sold 1.1 million square meters in land and other real estate properties to various buyers in exchange for whopping amounts. However, parliamentarians at the time chose to suspend the investigation, prompting an open “thank you letter” from Ghalibaf. Mir-Salim said Ghalibaf had launched an intense lobbying campaign to tilt the trajectory of events in his favor.

Ahmad Tavakkoli is a senior figure representing the traditional layer of the conservative camp, and is known for his vocal drive against corruption. As the founder and director of Transparency and Justice Watch — an Iran-based nongovernmental body committed to eradicating deep-rooted fraud —Tavakkoli has now publicly called on Mir-Salim to deliver any document in his possession pertaining to the parliament speaker’s alleged fraud. He has promised an independent examination of all the files based on the NGO’s charter and before informing the public about the conclusions.

Mir-Salim’s push continues to draw the ire of Ghalibaf advisers, who have now filed a lawsuit with the judiciary, accusing him of defamation through “false allegations.” A similar angry mood was reflected in a wide network of pro-Ghalibaf media outlets. “The judiciary should treat Mir-Salim with no leniency should he fail to prove the allegations,” wrote Tasnim, a news agency linked to the Islamic Revolutionary Guard Corps, the military organization Ghalibaf has been a part of since the age of 19.

Mohammad Malekshahi-Rad, a former lawmaker who says he was familiar with the aborted investigation, has come out in support of Ghalibaf, flatly dismissing the bribery saga. He has said that those lawmakers pushing the probe failed to offer any hard evidence and that the entire episode was a politically motivated smear campaign to discredit Ghalibaf ahead of the 2017 presidential election. Other ex-parliamentarians close to the case have yet to come out to either corroborate or deny such statements.

The planned probe dealing with 36 different files was partly triggered by investigative journalist Yashar Soltani, who blew whistle on what came to be known as the “astronomical properties case.” The revelation, however, cost Soltani two months in jail in what many saw as retaliation from Ghalibaf and his allies in the judiciary.

Yet even the judiciary’s support of the former mayor did not close the file in the public sphere. During the 2017 presidential election campaign, Ghalibaf continued to face incessant questions from across the political spectrum regarding not only those allegations but reports also that his son was allegedly leading a financial empire and that the mayor's wife had been paid some $15.8 million from municipality funds to run her “charity organization.”

In 2018, Tehran had a new mayor: Reformist politician Mohammad Ali Najafi, who handed to prosecutors what was said to be detailed proof of Ghalibaf embezzlement, among other purported violations. The case, nevertheless, was shrugged off by prosecutors, with no concrete results from a possible probe. Instead, under what many believed was immense pressure from the Ghalibaf team, the tenure of the new mayor proved fleeting. Najafi resigned after eight months.

It is not immediately known if Mir-Salim will also have to pay a price for raising allegations against the former general and current parliament speaker. Mir-Salim's move, nonetheless, is exposing more than before the fault lines within Iran’s camp of hard-liners, who are already in control of the judiciary and parliament but are hoping also for presidency, the only remaining branch of governance that could complete their grip on power.

Still, consensus on a presidential candidate appears to be a far-fetched goal in the divided camp. A new generation of conservatives, known as neo-Principlists and led by Ghalibaf, has shown dogged determination to effectively sideline the traditional sectors to which Mir-Salim  belongs.

Ghalibaf’s three defeats in previous presidential elections, on the other hand, seem not to have weakened his ambitions. Despite his success in dodging corruption-related prosecution, a full closure of the case at public levels is perhaps what he needs to pave his road toward presidency.

Mashregh News, an ultraconservative outlet that shares much of Ghalibaf's political ideology, slammed Mir-Salim over the revelations, likening him to a “loose tooth” that should be removed by the judiciary. Mashregh called for a purge of the veteran politician from the political scene because “his presence there will not be in the best interest of the ruling establishment and the public.”

Commentaries of the sort have already raised fears about a potential reign of terror should Ghalibaf ultimately take the presidential seat. “If that rhetoric is truly representative of Ghalibaf supporters, then in case of his possible presidency, a new era will be on the horizon, when opponents will choose to bid farewell to activism only to save themselves from execution,” wrote pro-Reform pundit and former political prisoner Ahmad Zeidabadi on his Instagram account.