Despite their divisions, Iran's conservatives and hard-liners are still likely to dominate the legislative elections next month, as many progressives are rejecting the vote entirely. 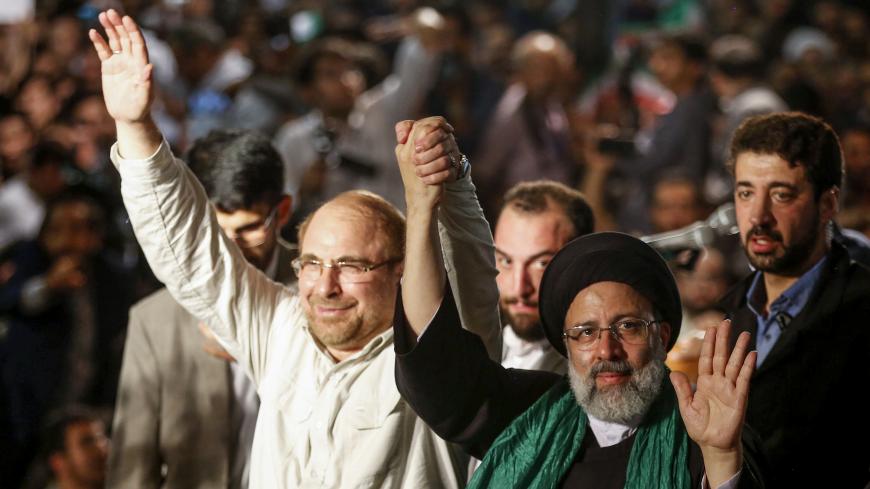 Iran’s hard-liners and conservatives appear to have failed to reach a unified platform ahead of the Feb. 21 parliamentary election, though they face no serious competition, as Reformists are mostly determined to boycott the ballot boxes.

For a year, conservatives and hard-liners have sought to set their differences aside and form a united front. Senior conservatives established the unofficial Council of Unity to manage the election. The council was at first successful in attracting influential faces. But many of these figures left, including former presidential candidate and nuclear negotiator Saeed Jalili, along with the hard-line Endurance Front. However, the council continued to meet, presenting itself as the only major coalition of hard-liners and conservatives.

The council has been renamed the Council for the Coalition of the Revolutionary Current. While at first hard-line former parliament speaker Gholam-Ali Haddad-Adel played a significant role in the council and planned to run in the election as the ticket leader, he suddenly withdrew from the race. His decision seemed to be the result of a deal for three-time conservative presidential candidate Mohammad Bagher Ghalibaf to replace him.

Currently, Ghalibaf is the central figure in the coalition, though traditional conservative groups including the Islamic Coalition Party are determined to promote their candidate, Mostafa Mir-Salim, and Ghalibaf had indicated that he would run on an independent ticket under the name of “Neo Principlism.” Ghalibaf, a former mayor, is more powerful than Mir-Salim, so the coalition may unite behind him. However, doing so could prove costly for the fragile coalition, as it may cause traditional and moderate conservatives to run on an independent ticket.

Ghalibaf has another rival: hard-liner Alireza Zakani. Ghalibaf’s inner circle is concerned about how well they would get along. Nonetheless, Morteza Talai, Tehran's police chief who is close to Ghalibaf, believes that they will eventually reach a deal, as they have similar goals and Zakani was Ghalibaf’s campaign manager in the 2005 presidential election. A large number of hard-liners and conservatives don’t consider Ghalibaf to be an insider and loyal to the ideals of the 1979 revolution because he has been accused of corruption and has repeatedly spoken in favor of the 2015 nuclear deal and interaction with the Western world. Hard-liners have frequently called him a liberal.

Meanwhile, the hard-line Endurance Front, which stands fiercely against the nuclear deal and any relationship with the West, has made it clear that it won't be part of the coalition and will run in the election on a separate ticket. The Endurance Front is led by hard-liner Ayatollah Mohammad Taqi Mesbah-Yazdi, a staunch enemy of moderate Iranian President Hassan Rouhani and Reformists. The front has proved inflexible and the conservatives have repeatedly failed to reach an agreement with them. The Endurance Front complains that the coalition won't accept its demands, which include omitting pro-nuclear deal candidates from the coalition's ticket.

Meanwhile, many young hard-liners and conservatives are reportedly planning to run in the election on independent tickets.

The disagreements have led some senior conservatives to warn of a possible loss. Mohammad Reza Bahonar, secretary general of the Islamic Society of Engineers, stated Dec. 28, "It is highly likely that we will commit a strategic mistake, leading us to lose to ourselves.”

Nonetheless, the hard-liners and conservatives seem assured they have no significant rival in the race. This time, the Reformists probably won't win a majority in parliament, as many voters have been disappointed with their performance. Many Reformist politicians say they won't run in the election, as they don't expect to be able to enact the reforms the country needs. At the same time, many Iranians, especially in Tehran, are adamant that they won't take part in the election. A survey conducted by the Iranian Students Polling Agency showed that only 21% of respondents in Tehran are expected to take part in the election. Tehran had around 50% turnout in the previous parliamentary election in 2016. Whenever turnout has been low, hard-liners and conservatives have won, as their supporters tend to see voting as a religious duty.

Meanwhile, hard-line former President Mahmoud Ahmadinejad is expected to back certain candidates who have kept a low profile so as not to alert the conservative-dominated Guardian Council, which vets the hundreds of candidates who apply to run in each presidential election. Apparently, following the council’s announcement of approved candidates, Ahmadinejad will announce his own ticket of candidates from his circle. While he remains a hard-liner, when Ahmadinejad turned against the Iranian leadership, the Guardian Council disqualified him in the 2017 presidential election.

In sum, given the disputes and disagreements, it's likely that conservative and hard-liner candidates will run on four or five separate tickets. When the Guardian Council’s approved list of candidates is announced in February, they will decide whether to work together or separately.