German national Hella Mewis, who was abducted outside of her office in Baghdad on Monday evening, was freed in an operation carried out by Iraqi security forces. 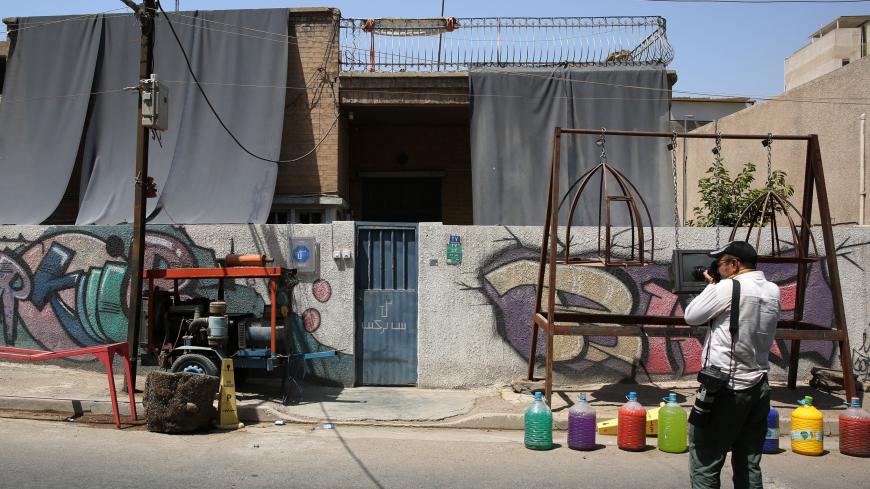 An Iraqi photojournalist takes pictures of the Iraqi art collective Tarkib in Baghdad's Karrada neighborhood on July 21, 2020, one day after a German citizen who ran arts programs at the center supporting young artists was kidnapped meters away from her office in the Iraqi capital. The woman, Hella Mewis, has now been rescued. - Photo by AHMAD AL-RUBAYE/AFP via Getty Images)

A German woman kidnapped in Baghdad this week has been freed by Iraqi security forces, German and Iraqi officials said today.

Hella Mewis was abducted from outside her art collective office in central Baghdad around 8 p.m. Monday. An Iraqi armed forces spokesman, Brig. Gen. Yahia Rasool, announced her release on Twitter today, but provided no further details.

Ali al-Bayati, a member of the semi-official Iraqi Human Rights Commission, told Al-Monitor the perpetrators were arrested this morning following an operation conducted by the Iraqi Falcons Intelligence Cell and the tactical force of the intelligence agency at the Interior Ministry.

An unnamed security official told The Associated Press that Mewis was found blindfolded.

In a statement, the Interior Ministry said the elite Falcons intelligence and federal police carried out a raid in the al-Rusafa area of Baghdad to free Mewis “72 hours after being kidnapped.” Interior Minister Othman al-Ghanemi then handed Mewis over to the German Embassy in Baghdad.

No group has claimed responsibility for the kidnapping, and officials have not commented.

On Monday evening, Mewis was "riding her bicycle when two cars, one of them a white pickup truck used by some security forces, were seen kidnapping her," a security source told Agence France-Presse. The Berlin-born artist had lived in Baghdad since 2015 and worked on the Bait Tarkib collective, which supports the work of emerging Iraqi artists.

German Foreign Minister Heiko Maas thanked the Iraqi authorities today for their “extensive support,” adding they “made a decisive contribution to ensuring that this case ended well.”

“I am very relieved that the German citizen kidnapped in Baghdad on Monday is free again this morning,” Maas said in a statement.

Her abduction came two weeks after leading Iraq researcher Hisham al-Hashimi was killed outside his Baghdad home in an attack that Iraqi Prime Minister Mustafa al-Kadhimi blamed on armed groups “outside of the law.”