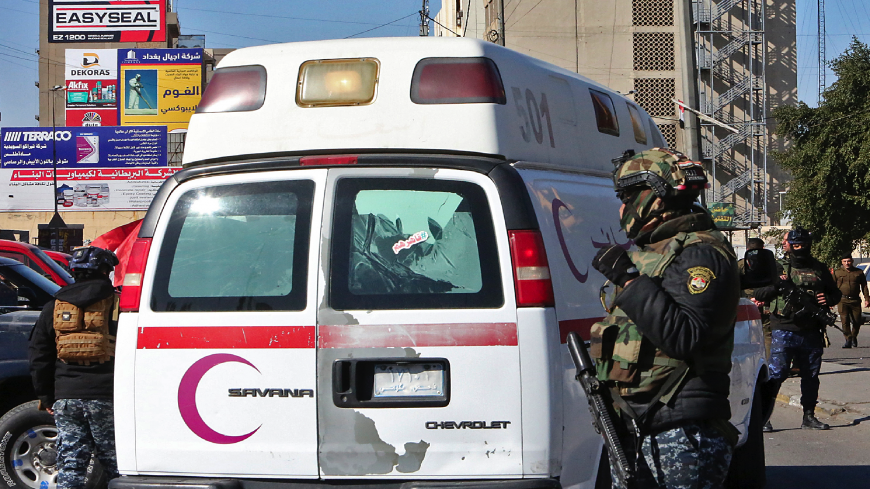 A picture shows the scene of a twin suicide bombing on a bustling commercial street in the heart of Baghdad on Jan. 21, 2021. Islamic State has claimed responsibility. - SABAH ARAR/AFP via Getty Images

Iraqi security forces killed the man believed to be the second-highest commander of Islamic State (IS) and the group’s top leader in Iraq, Abu Yaser al-Issawi, during an operation on Thursday, Prime Minister Mustafa al-Kadhimi announced.

The area is considered one of the remaining hideouts of IS sleeper cells that have terrorized local populations with assassinations and kidnappings since Iraq declared victory over the supposed caliphate in late 2017.

A spokesperson for Kadhimi's office confirmed the news of the jihadi leader's death to Al-Monitor.

Iraq's Counterterrorism Service said Issawi was "shot in the head by the rifles" of its soldiers.

On Friday, however, the US-led international military coalition to defeat IS said Issawi was killed along with ten other suspected IS personnel in an airstrike during a "partnered operation" with Iraq's security forces.

Originally from Anbar province, Issawi — whose full name is thought to be Jabbar Salman Ali Farhan — is believed to be IS’ Iraqi wali, or governor, and a deputy to so-called caliph Abu Ibrahim al-Hashimi al-Qurayshi.

His death at the hands of Iraq’s security forces would mark a notable victory for the Kadhimi government, which faces increased criticism after IS claimed a rare double suicide bombing in a crowded downtown marketplace in Baghdad last week.

The twin blasts killed more than 30 people and injured more than 100, prompting Kadhimi to fire a number of security officials, including the commander of Iraq’s federal police and the deputy interior minister for intelligence affairs.

“We promised and fulfilled,” Kadhimi wrote Thursday. “I gave my word to pursue Daesh terrorists, [and] we gave them a thundering response.” Daesh is the Arabic acronym for the Islamic State.

Iraqi security officials believe the 39-year-old Issawi rose to prominence as a military commander and governor of north Baghdad before being placed in charge of the group’s entire franchise in Iraq as the so-called caliphate collapsed.

The Iraqi official told Al-Monitor that Issawi’s death came after security forces had tracked down 17 of his associates in Kirkuk and Salahuddin provinces over the last five months, including the man believed to be Issawi’s private courier, Laiq Muhammad Dawud al-Bayati, and the suspected top ringleader of IS militants in Kirkuk, Ghassan Najm Saleh Ahmed al-Obeidi.

Issawi is the highest-ranking IS official killed or captured since Abdul Nasser Qardash was detained by Syrian Kurdish-led forces at the Battle of Baghouz in 2019. Qardash, who was later handed over to Iraq's security services, is the highest-ranking IS official ever captured alive. The group's original self-declared caliph, Abu Bakr al-Baghdadi, died in a US Delta Force raid on a compound in northwest Syria near the Turkish border in October 2019. IS' current leader remains at large.

Al-Monitor has reached out to the US-led international military coalition for comment.