The French decision follows NATO's report on a June incident in the Mediterranean Sea between France and Turkey amid tensions between the two NATO allies over the sea and Libya. 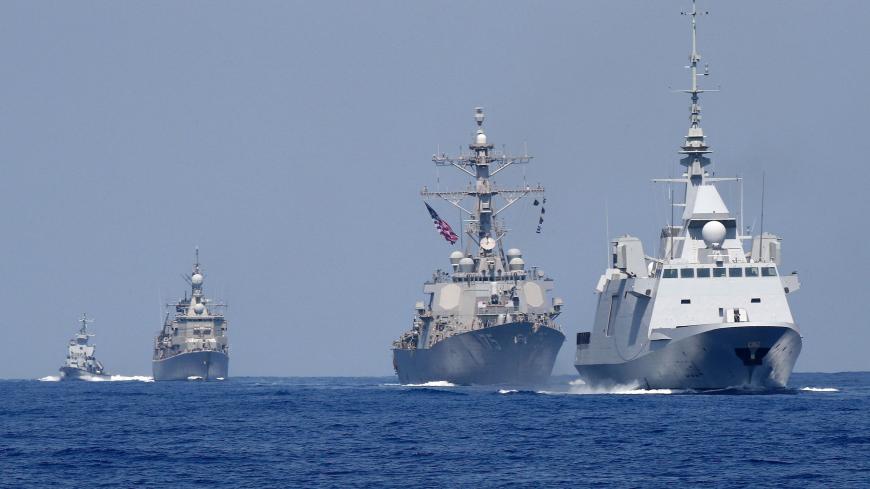 France reportedly pulled out of a NATO naval operation in the Mediterranean Sea following the investigation into an earlier maritime incident with Turkey. It is the latest in a series of disagreements between the NATO allies over the strategic body of water and Libya.

In June, France accused Turkey of harassing one of its warships in the eastern Mediterranean. France says it was inspecting a civilian cargo ship suspected of bringing weapons to Libya, which is subject to a UN weapons embargo. France said a Turkish ship conducted repeated radar targeting of the French vessel as it was doing the inspection, which Turkey denied. NATO announced it would conduct an investigation following the incident.

The results of the investigation prompted France to pull out of NATO’s Sea Guardian operation, Reuters reported today, citing a French defense official.

What exactly the investigation concluded is unknown. A NATO official told Al-Monitor the report is classified and will be discussed by NATO members soon.

“The NATO military authorities have submitted their report on the incident between a Turkish ship and a French ship in the eastern Mediterranean last month,” the official said, adding, “This is a classified report and will be discussed among allies in the NATO Military Committee in the near future.”

Meanwhile, Operation Sea Guardian is continuing, according to the NATO official. The operation focuses on counterterrorism, freedom of navigation, infrastructure protection and other goals in the Mediterranean.

France and Turkey have had a series of open disagreements over the sea and Libya this year. France sides with Cyprus and Greece in their dispute with Turkey over hydrocarbon drilling in the eastern Mediterranean. The area Turkey seeks to drill for the energy source is considered by France, Greece and the European Union to be Greek and Cypriot waters.

In Libya, Turkey supports the UN-recognized Government of National Accord, which is fighting the Libyan National Army (LNA). France has spoken in favor of the LNA and has allegedly armed the group. The Mediterranean and Libyan issues prompted France to join Greece, Cyprus, the United Arab Emirates and Egypt in an anti-Turkey alliance in May.