Turkey disputes the European Union's position that the waters where Turkey hopes to drill for hydrocarbon belong to Greece and Cyprus. 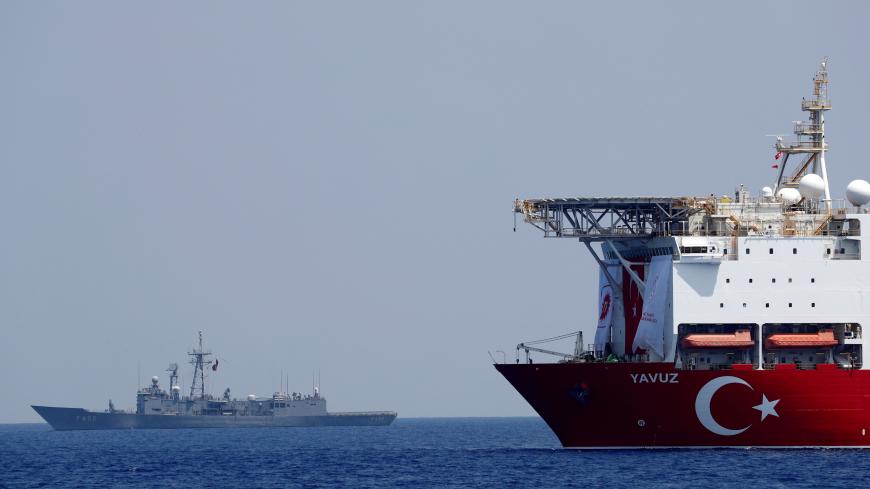 The Turkish drilling vessel Yavuz is escorted by the Turkish navy frigate TCG Gemlik in the eastern Mediterranean off Cyprus, Aug. 6, 2019. - REUTERS/Murad Sezer

The European Union’s top diplomat criticized Turkey yesterday for what the EU views as an infringement upon Greek and Cypriot territory in the Mediterranean Sea, according to Greek media outlets.

The EU’s high representative for foreign affairs said Turkey should stop energy exploration in that part of the eastern Mediterranean, although Turkey disputes that the area belongs to Greece and Cyprus.

“We are calling on Turkey to stop drilling in the areas where there is the EEZ (exclusive economic zone) or territorial waters of Cyprus and Greece,” said Josep Borrell, as reported by the Greek news outlet Kathimerini.

Turkey began exploring off the coast of Libya in January for hydrocarbons. The area is west of Cyprus and southeast of the Greek island of Crete. Turkey has an agreement to operate there with Libya’s UN-recognized Government of National Accord, which Ankara backs militarily.

Greece and Cyprus consider the project to be in their territorial waters.

Greece and Turkey have had a complicated relationship throughout history. The two countries had a population exchange following the breakup of the Ottoman Empire, for example. With Cyprus, the island is divided into the Republic of Cyprus, which is predominantly ethnically Greek, and Northern Cyprus, which has mostly ethnic Turks and is only recognized by Turkey.

The Turkish government released a statement Tuesday saying Turkey and Northern Cyprus have rights to drill in the waters. “Protection of our country's rights and interests in land, sea, and air will continue without any compromise,” read the statement, according to the pro-government newspaper Daily Sabah.

Borrell said the EU is in close contact with Greece and Cyprus and that their complaints are of the “utmost importance,” according to Kathimerini.

The United Arab Emirates and Egypt back Gen. Khalifa Hifter’s Libyan National Army against Turkey’s ally, the Government of National Accord, in Libya. France has also reportedly supported Hifter clandestinely.