Cairo cozies up to Baghdad, condemns Turkish attacks in Iraq

Egypt's efforts to sideline Turkey in Iraq have expanded as Cairo cements economic and military ties with Baghdad. 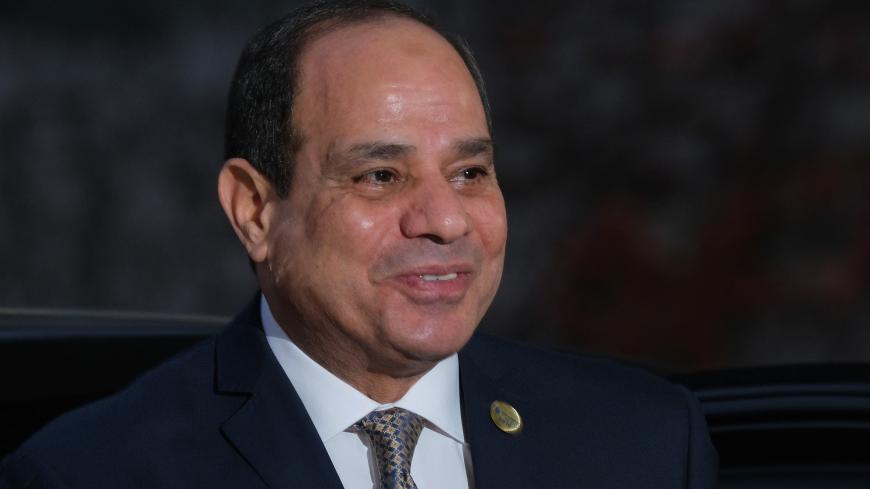 Abdel Fattah al-Sisi, President of Egypt, arrives for the Compact with Africa summit at the Chancellery on Nov. 19, 2019 in Berlin, Germany. - Sean Gallup/Getty Images

Egypt has been facing off against Turkey not only in Libya, but also in Iraq, where the Turkish army has launched attacks in the north targeting the Kurdistan Workers Party, according to a June 15 Turkish Ministry of Defense statement. Meanwhile, Iraq has been accusing Turkey of violating Iraqi sovereignty and disrespecting the principles of good neighborly relations.

The Iraqi Parliament called on the UN Security Council July 6 to step in to stop the Turkish military incursions.

Egypt took advantage of the Iraqi-Turkish dispute to step up its efforts to cement ties with Iraq. Cairo offered diplomatic and political support to Baghdad against Turkey and the Egyptian Ministry of Foreign Affairs condemned the Turkish military intervention June 19.

In an earlier statement on July 3, the Egyptian Ministry of Foreign Affairs condemned ongoing Turkish violations of Iraqi sovereignty under what it called unfounded national security allegations and asserted that its actions are unacceptable and undermine regional peace and security.

In response July 4, the Turkish Ministry of Foreign Affairs called Egypt's condemnation “black comedy” and said, “Egypt’s accusations that Turkey is a source of instability in the region are unacceptable.”

Egypt is also seeking economic rapprochement with Iraq at a time when Baghdad is threatening to undermine Turkey’s trade interests in response to the Turkish military intervention in northern Iraq. In a July 3 press statement, spokesperson for the Iraqi Ministry of Foreign Affairs Ahmed al-Safah alluded to the possibility of Baghdad employing economic pressure against Ankara, saying that his country is reviewing indicators on the ground before taking action. He said, “There are dozens of Turkish companies based in Iraq and ongoing trade relations with Ankara that generate more than $16 billion for Baghdad. We are currently looking into these elements.”

On July 8, Minister of International Cooperation Rania al-Mashat discussed with Nayef ways for the Egyptian private sector to participate in reconstruction in Iraq and other means of economic cooperation between the two countries.

Egypt also seeks to help Iraq with its medical needs in another effort to boost relations. After meeting with Nayef in Cairo July 5, Egyptian Minister of Health Hala Zayed announced that the ministry will send medical aid to Iraq to battle the coronavirus pandemic.

Egypt is also heightening security cooperation and the fight against terrorism in Iraq. Iraqi Minister of Foreign Affairs Fouad Hussein announced June 24 that his country is looking to hold tripartite talks with Egypt and Jordan to discuss anti-terrorism cooperation.

In 2016, the Iraqi Ministry of Defense announced that it would train thousands of Iraqi soldiers in Egypt.

Professor of political science at the University of Cairo Tarek Fahmy said, “Egypt is vexing Turkish greed in Iraq by cementing ties with Iraq.” He told Al-Monitor, “Baghdad wants to return to Arab alignment to fend off Iranian and Turkish influence. For that reason, Iraq is drawing closer to Egypt, and both countries share underlying interests to keep Turkish greed at bay.”

He added, “Under the rule of late Iraqi President Saddam Hussein, Iraq accommodated millions of Egyptian workers, which showed acceptance of Egyptians among the Iraqi people. This ensures public support for Iraqi-Egyptian relations on both the political and the investment fronts.”

Fahmy noted, “Turkey is aware of Egypt’s [stance against] it and its ability to be strongly present in Iraq. For that reason, the Turkish Foreign Ministry’s response to Egypt’s condemnation of its military action in north Iraq had a strong tone.”

Fahmy called for establishing tight relations with Kurds in northern Iraq and Syria.

Secretary General of the Arab Investors Union and former assistant to the minister of foreign affairs Jamal Bayoumi said, “Egypt is adopting a policy of a strong diplomatic and trade presence in the Arab region, especially in Iraq.”

He told Al-Monitor, “Turkey is targeting Iraq for two reasons: military presence through military bases in north Iraq to expand its military influence in the Arab region. Second, targeting Kurds and residents of north Iraq and Syria who Turkish President Recep Tayyip Erdogan tells his people are a threat to Turkey.”

Reuters quoted a Turkish official as saying July 18 that Turkey’s recent military moves in northern Iraq are designed to multiply Turkey’s military bases in the area.

The official explained, “Egypt is trying to foil the Turkish plan in Iraq by capitalizing on the public closeness and acceptance of the Egyptian role. For that reason, Egypt has beefed up its diplomatic actions through the Arab League and the Foreign Ministry to support Iraq.”

The Arab League said in a June 15 statement, “The Turkish military intervention constitutes an attack on Iraqi sovereignty and is happening in the absence of coordination with the government in Baghdad. This shows Ankara’s undermining of international law and of its ties with its Arab neighbors.”

Bayoumi said, “The worst crises facing Egyptian investors in Iraq are bureaucracy, instability and the wide presence of armed groups." He added, "The Egyptian government is trying to cooperate with Iraq to remove these obstacles and encourage the Egyptian private sector to contribute to reconstruction projects and compete with Turkish investors."