Egypt has been passing the days leading up to the anniversary of the military coup that toppled President Mohammed Morsi with a clampdown reminiscent of 2013. 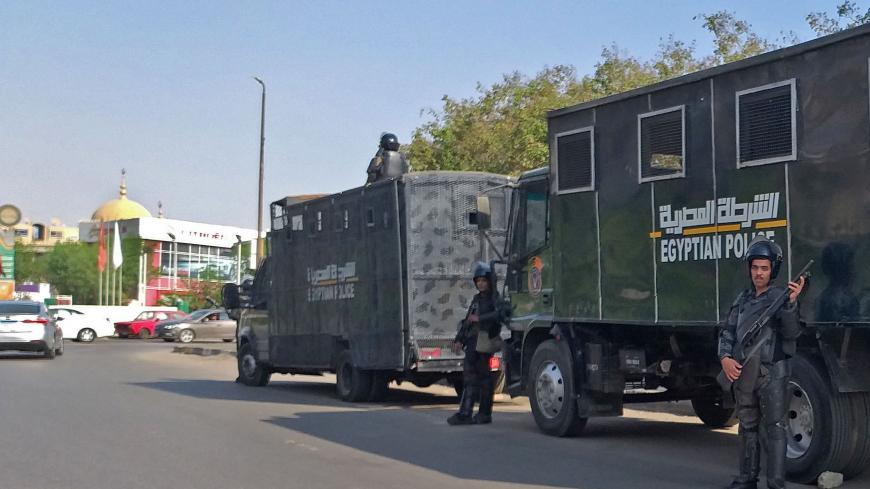 Two militants who allegedly had been plotting terror attacks were killed in an exchange of gunfire with security forces in the Jalbana area of North Sinai June 30. The Egyptian news reports quoted a statement by the Interior Ministry that weapons and ammunition were seized during a police raid that “thwarted terrorist attacks planned to coincide with the seventh anniversary of the June 30 Revolution.”

The ongoing North Sinai war on terrorism has inflicted a heavy toll on the military and police — the primary targets of the Islamic State-affiliated insurgency in Sinai. It has also claimed the lives of dozens of civilians as the violence spilled over from Sinai into the rest of the country. News of the deaths was both a reminder of the authorities' failure so far to restore security and stability (despite President Abdel Fattah al-Sisi's repeated promises to end the unrest) and a further example of the extrajudicial killings and other rights abuses recurrent since Sisi decreed a sweeping anti-terrorism law in mid-2015. Shielding the military and police from prosecution for disproportionate use of force, the law has allowed security forces to escape accountability for such actions.

Commemorating the anniversary of the military-backed protests that overthrew Egypt's first democratically elected president, Mohammed Morsi, on July 3, 2013, the country's largely pro-government media turned a blind eye to such malpractices. Instead, jingoistic songs glorifying Sisi and the "glorious revolution" that brought him to power blared from car radios. Public service messages aired incessantly on Egyptian TV channels throughout the day, highlighting Sisi's accomplishments while vilifying the "terrorist" Muslim Brotherhood. Sisi, who led the military coup that overthrew Morsi, has since overseen a brutal crackdown on the Islamic group's leaders, members and sympathizers. Thousands of opposition figures have been detained on charges of belonging to the terrorist group. Many of them have been tortured, killed or forcibly disappeared.

Amr Magdi, a researcher with Human Rights Watch, believes the Sisi regime started off "on a wrong footing" and has since been unable to backtrack. He cites the Rabaa Massacre that saw nearly 1,000 pro-Muslim Brotherhood protesters killed by security forces in a single day of violence on Aug. 14, 2013. “Committing such a horrific atrocity was telling of the nature of the regime the popular uprising had helped bring to power," Magdi told Al-Monitor. "Having committed such excesses from the beginning made it hard for the regime to retreat as they felt their personal safety was at stake."

He continued, “When Egyptians took to the streets on June 30, a military coup wasn't what they had bargained for. The goal was to have early elections or at least to force the Morsi government to be more inclusive and work toward achieving the ‘Bread, Freedom, Social Justice’ slogan of the 2011 uprising. But the military hijacked the people's movement and installed a military-backed government — this is fundamental to understanding why the trajectory from July 3 was a wrong trajectory.”

The crackdown, which in the early years of Sisi's rule targeted political opponents, was later expanded to target rights defenders, liberal activists and journalists. In recent weeks, the government has stepped up efforts to silence the few remaining independent media voices. Nora Younis, editor-in-chief of Al Manassa — one of hundreds of websites that have been blocked in the country — was arrested June 24 on charges including operating an unlicensed platform and misusing social media. She was released the following day on bail of a 10,000 Egyptian pounds (around $618) pending further investigation.

Younis’ arrest sent a chilling message to other journalists, forcing many into silence. In the repressive climate, it is not surprising that there has been little criticism in the Egyptian media of the government's heavy-handed policies. Newspaper editors and TV talk show hosts have meanwhile turned their wrath on dissenters, demonizing anyone remotely critical of the government and labelling them "foreign agents" and "traitors." As expected, the media coverage of the June 30 anniversary was biased and propagandist: Only government cheerleaders were allowed on TV talk shows to discuss Sisi's "unprecedented" achievements and sing the praises of the regime.

Egyptian newspapers devoted entire pages to the government-funded megaprojects implemented over the last six years. Some of these projects — such as the ambitious health campaign to rid the country of Hepatitis C, the reclamation of land for agricultural use and construction of the new Grand Egyptian Museum (set to open as early as next year) — are indeed worthy of praise. Some others like the construction of a new administrative capital and the $8 billion expansion project to the Suez Canal, have meanwhile stirred controversy with critics saying the megaprojects were undertaken to "boost Sisi's image."

Nevertheless, many of the infrastructure projects (construction of roads, bridges, airports and affordable housing for low-income families) carried out by military-run companies are a source of pride for many Egyptians, coming after decades of stagnation and turmoil.

Some analysts, however, argue that the massive surge in megaprojects (most of which are managed by the military) and their expanded role in economic activities, such as media broadcasting and domestic supply chains, have entrenched the military deeper in the economy — a role the generals may likely be reluctant to relinquish.

Concerns are also growing over the military's unfair competition with the private sector, with complaints from the latter of being “crowded out of lucrative sectors by the military.” A handful of military companies have started opening up their businesses to domestic and foreign investors — a small step in the right direction — but the move has done little to reassure the private sector, which feels that competing with an institution of such heavy political clout puts them at a disadvantage.

Speaking in an address on the eve of the June 30 anniversary after inaugurating a number of developmental projects, Sisi vowed to press ahead with economic reforms “to undo the corruption and neglect” from which Egypt has suffered for years. He also pledged to protect Egypt's national security from regional threats in an apparent reference to rising tensions with Ethiopia and Turkey.

But Sisi also faces a number of domestic challenges, not least of them the insurgency in Sinai and the deep polarization in society. Aware of the rising discontent, he has said that “the army is fully prepared to confront any threats to Egypt's national security, whether inside the country or abroad.”

Nowhere were the divisions more evident than on social media with government supporters flaunting photos of themselves raising the Egyptian flag at the 2013 protests while opponents shared images of the deposed Morsi, who died of a heart attack at a trial hearing in July last year.

A widely circulated video showing Sisi promising that Egyptians would see a "very different" Egypt by June 30, 2020, provoked satirical comments from some critics.

Online calls for a fresh round of protests on June 30 also gained momentum in the days leading up to the anniversary, with activists listing reasons Egyptians should rise against the government.

Although it was highly unlikely that any such protests would materialize in the repressive environment, the government was not taking any chances: A public holiday to mark the occasion was abruptly canceled. Prime Minister Mostafa Madbouly announced that the holiday has been postponed to July 2 so that citizens may enjoy a long weekend with their families.

Magdi is skeptical about what lies ahead. “The society remains deeply divided without any transitional justice or a pause from unjust daily detentions and mass trials. Egypt is completely on the wrong trajectory; this can only make the future harder for everyone.”