Ethiopian refugees in Egypt worry that their situation will decline further due to the Nile dam row between their host and home country. 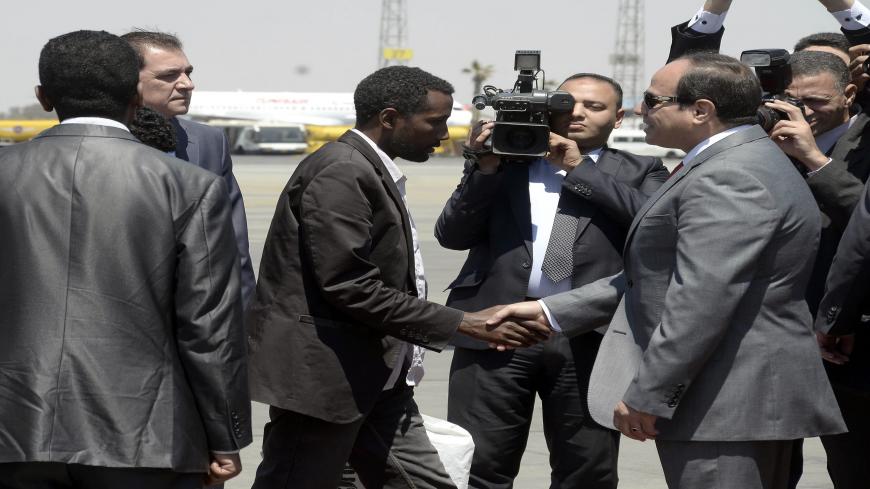 Egyptian President Abdel Fattah al-Sisi (R) receives an Ethiopian man who Sisi said was "rescued" from war-torn Libya alongside 26 of his compatriots by Egypt's security services upon their arrival at Cairo airport, Egypt, May 7, 2015. - STR/AFP via Getty Images

CAIRO — Abdel Meguid al-Karki, an Ethiopian refugee in his mid-30s, has learned the importance of concealing his identity the hard way.

On the way to a grocery store in the southern Cairo district of Hadayek el-Maadi, where he lives, Karki's brother, 19, was attacked by a group of Egyptians a few days ago, and had his belongings, including his cellphone and the groceries he bought from the store, stolen.

Those involved not only robbed him, they beat him and let a dog loose on him.

“The members of the mob were acting very violently, even though they did not know the boy personally,” Karki told Al-Monitor. “They said they wouldn't allow Ethiopia to take the Nile River all for itself.”

Ethiopians living in Egypt are caught in the middle of escalating tensions between Egypt and Ethiopia over the Nile dam.

Egypt has recently referred the dam issue to the United Nations Security Council, requesting the world body to commit Addis Ababa to hammering out a binding deal on the dam's operation and filling of its reservoir.

The Egyptian move came following almost a decade of failed negotiations with Ethiopia, with both parties accusing each other of causing the negotiations' failure.

Whereas the dam is a development issue for Ethiopia, it is a matter of life or death for Egypt, given the populous Arab country's heavy dependence on the river's water.

“Egypt will uphold and protect the vital interests of its people,” Egyptian Foreign Minister Sameh Shoukry said in an open Security Council discussion on the Ethiopian dam on June 26. “Survival is not a question of choice, but an imperative of nature.”

When it is operational, the multibillion-dollar hydroelectric dam will significantly trim the amount of water flowing to Egypt, at least during the period of its reservoir filling, which should have started this month.

Nevertheless, the Ethiopians living in Egypt are apparently paying the price of Egypt's fears, amid growing hostility to their country among Egyptians.

“There is an increase in attacks on the Ethiopians living here, even though most of them have nothing to do with the dam,” said Taher Omar, an Ethiopian community leader who runs the Ethiopian Refugee in Egypt Facebook page, which offers services to Ethiopian refugees in Egypt. “Egyptians think the Ethiopians they see on the streets are responsible for the dam construction, which is not true.”

About 16,189 Ethiopians live in Egypt. Some of them come here in the hope of traveling to a third country and settling for good, away from the problems they suffered back home.

Most Ethiopian females work as domestic workers, while the men work in restaurants, cafes and the construction sector.

The Ethiopians are afraid that their situation will become more perilous if tensions between Egypt and Ethiopia rise even more in the coming days, against the background of the Nile dam row.

The Ethiopians' stay in Egypt is far from easy or comfortable. Most of them find it difficult to land jobs. Apart from the presence of a dearth of jobs for Egyptians, the job market is even more challenging for the Ethiopians because of the language barrier.

The coronavirus pandemic has brought additional pressures to the Ethiopians. Most of the domestic workers had to stay at home, with Egyptian families locking themselves up in their homes. Those working in restaurants and cafes also lost their jobs, with the closure of most of these outlets as part of the national coronavirus response.

“Some of the refugees cannot even buy bread for their families,” said Ziad Ahmad, another Ethiopian community leader. “Cut off from all types of support, staying at home for fear of the disease and unemployed, the refugees cannot be in a worse condition,” he told Al-Monitor.

Most of the Ethiopians living in Egypt are Oromos, the largest ethnic group in Ethiopia. The members of the group suffer torture, imprisonment, forced conscription and execution at home.

The members of the group rose up in anger against Ethiopian authorities on June 30, after the killing of popular Oromo singer, musician and activist Haacaaluu Hundeessaa. Dozens of people were killed and hurt in the violence that ensued, in a sign of growing hostilities between ethnic Oromos and the ruling elite in Addis Ababa.

There is also apparent growing hostility to the Ethiopians, in general, in Egypt as well.

There have been cases of locals knocking on the doors of the refugees and verbally or physically assaulting them, according to Ahmad. There are also cases of Egyptians harassing the Ethiopians on public transport.

“The refugees have come here to seek protection and save their lives,” Ahmad said. “We are not the government or our country. On the contrary, we oppose this government.”

Omar, who declined to give his family name, an ethnic Oromo himself, said he and fellow refugees wake up every day to news of the imprisonment or killing of family members, relatives or friends back home. “So, we have come here because our life was in danger in Ethiopia,” he told Al-Monitor.

In January 2015, Egyptian President Abdel Fattah al-Sisi said his country does not isolate refugees in camps or shelters.

In September of the same year, Sisi said his country hosted around 5 million refugees, even as 261,741 refugees only were registered with the United Nations refugee agency, UNHCR.

However, growing attacks against Ethiopians highlight the need for the authorities to take firm action against attackers, some lawmakers said.

“Attacks against the refugees — regardless of where they are from — are totally unacceptable,” Jamal Mahfouz, a member of the parliamentary Committee on African Affairs, told Al-Monitor. “The authorities take firm action against violators and this happened on many occasions.”

Karki has stopped saying he is Ethiopian. When he is asked about his nationality on the streets or on transport, he says he is Somali or even Sudanese. He is just afraid to face the same fate as his brother, who ended up with severe injuries from the dog attack.

Karki and his friends hurried to the scene and took the boy to a nearby hospital, but the hospital referred him to another hospital far away, because it was not equipped to deal with the kind of injuries he suffered.

At the hospital, a police officer wrote a report about the attack, but he did not seem surprised, or shocked, probably having faced similar attacks in the past days or weeks.

“The officer seemed to be very familiar with attacks on Ethiopians,” Karki said. “People like us do not know where to go. We escaped danger at home, but life here is far from safe.” 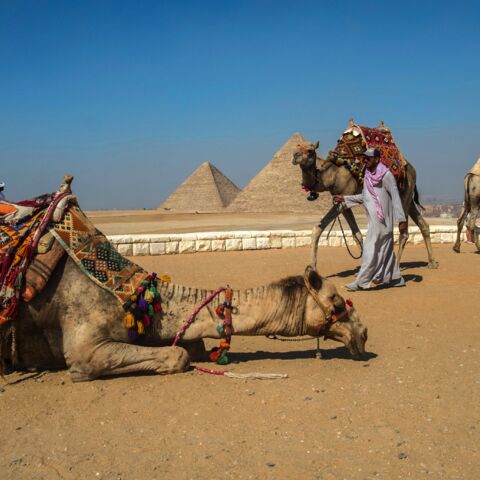 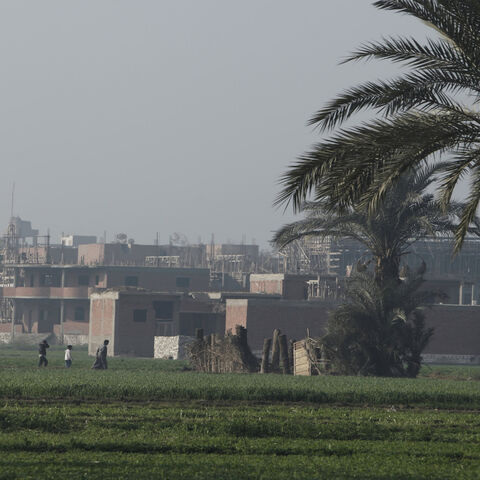 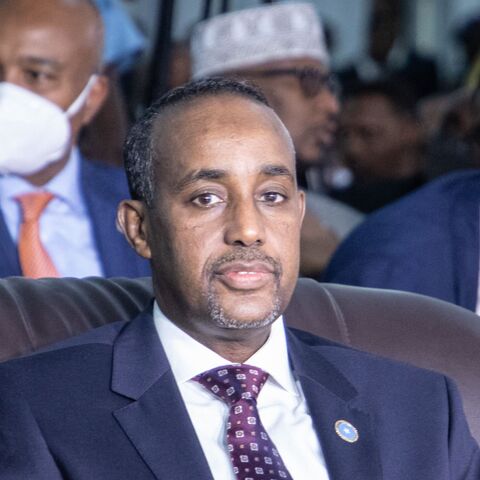