Turkish unions are denouncing proposed severance pay cuts that would impact 3.5 million workers, threatening a mass strike if the government does not change course. 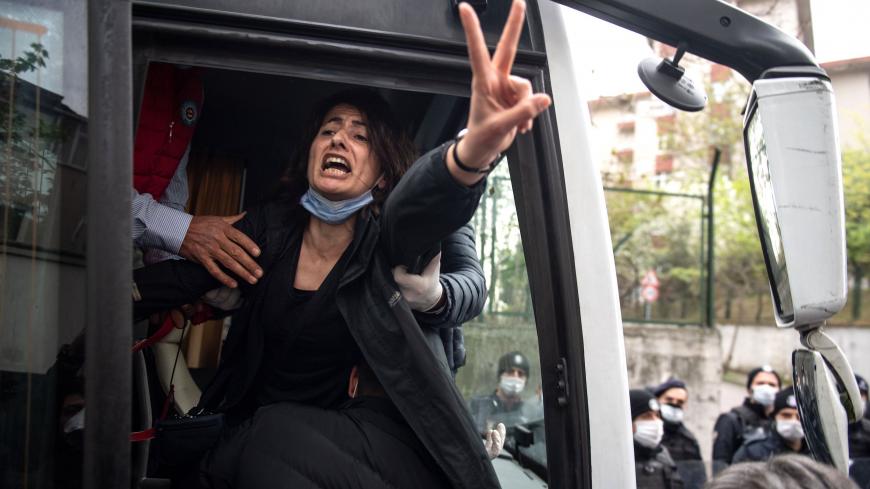 Police detain a demonstrator during a May Day rally marking the international day of the worker in Istanbul, on May 1, 2020, as the country tries to curb the spread of the novel coronavirus. - BULENT KILIC/AFP via Getty Images

ISTANBUL — Members of Turkey’s largest union gathered in the nation’s 81 provinces Monday to denounce proposed changes to severance pay laws, threatening a general strike if the measures are introduced in parliament.

“If the laws regarding our severance pay are introduced in parliament, we will extend the march we began today into a general strike, a general resistance,” said Arzu Cerkezoglu, chair of Turkey’s Confederation of Progressive Trade Unions (DISK), in a statement Monday.

Though the draft bill has yet to be made public, the Turkish government has outlined measures in recent weeks for a Supplementary Pension System (TES) that would cut severance pay rights for workers under 25 years of age and over 50.

Addressing the issue in a speech Saturday, Turkish President Recep Tayyip Erdogan said the changes were necessary to create “a radical solution for employees’ problems” at a time when the country is attempting to increase exports and global trade. The president added the state was compelled to act after union leaders failed to reach a compromise on severance pay packages.

In response, Turkey’s major union leaders complained they have been excluded from high-level meetings in which the draft bill is being crafted, condemning proposed changes as a “red line” for workers’ rights in Turkey as the nation’s $750 billion economy continues to recover from the impacts of the ongoing coronavirus pandemic.

Adnan Serdaroglu, secretary general for DISK, said severance pay laws are a burden for Turkish companies struggling amid the global economic slowdown and the state is altering current regulations at the expense of Turkish workers. He added the proposed measures would reduce job security in multiple sectors by allowing companies to hire and fire workers at will.

“The main reason is there is an unemployment fund in Turkey and the government is using this fund for its benefit and to cover other things,” Serdaroglu told Al-Monitor, adding, “The government will use this severance pay fund to cover deficiencies in other budgets. The government has a cash and resource problem.”

According to news reports on the proposed measures, part of the severance pay normally allotted to workers will be diverted to a state pension fund. Under current laws, workers receive 8.33% of their monthly salary as severance pay, but in the new TES system, 3% this payout will be deposited in workers’ individual pension funds instead.

The TES system is expected to come into effect on Jan. 1, 2022, and will also no longer require employers to pay social security premiums for employees working less than 10 days per month. In addition, workers reaching the retirement age of 60 will receive up to 25% of their pension in a lump sum, while the remaining funds will be paid out in monthly installments.

Union leaders say such changes infringe on labor laws in place since 1936 and could lead to the termination of countless jobs in Turkey. Though the Turkish government imposed a three-month ban on layoffs in March and extended the measure this month, workers’ rights advocates say the economic slowdown resulting from the coronavirus pandemic could lead to widespread job cuts that will require stronger state mechanisms to support unemployed citizens.

“The attack on our pension funds and severance pay has been ongoing for at least 50 years under different governments,” Serdaroglu told Al-Monitor. “This amendment does not do workers any favors. We oppose it.”

Erdogan announced Monday the state would extend wage support for workers by one month. Speaking during a cabinet meeting, the president said 18 billion Turkish liras ($2.63 billion) had been distributed under such programs since March.

A Reuters poll found Turkey’s consumer inflation rate is expected to rise above 12% in June, up from 11.4% in May. The news comes the nation’s central bank unexpectedly kept its key interest rate unchanged Thursday, citing upward trends in inflation, after nearly a year of interest rate cuts.

During a June 22 speech in parliament, opposition Republican People's Party senior Veli Agbaba said the state must take more action to defend workers amid the pandemic.

"Suicides have increased due to financial difficulties,” Agbaba said, adding, “While Turkey has been going through one of the gravest economic crises in its history with the new government system, the effects of the crisis are again felt by low-income families the most."

by Murielle KASPRZAK and Joseph SCHMID | AFP | May 26, 2022
END_OF_DOCUMENT_TOKEN_TO_BE_REPLACED