Turkey gets comfortable in northern Syria

Turkey appears to be preparing to remain in Syrian areas under its control without much thought for the long-term financial and political costs. 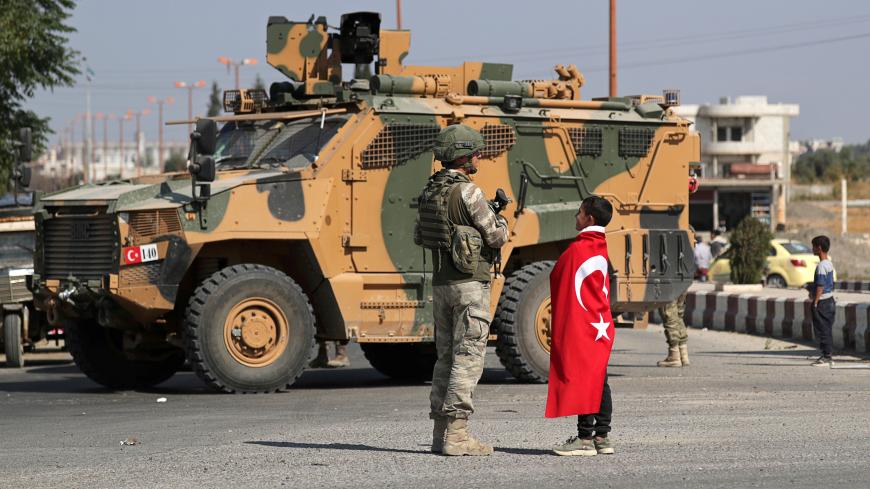 A boy wearing a Turkish flag stands next to a Turkish soldier in the town of Tell Abyad, Syria, Oct. 23, 2019. - REUTERS/Khalil Ashawi

Turkey continues to entrench itself militarily in northern Syria and all signs indicate that it is preparing to remain in parts of the region that it controls for the long haul. Ankara is setting up local governments and the institutional infrastructure overseen by Turkish military and civilian officials.

According to local sources, Ankara has deployed more than 10,000 troops to the region and sent over 7,000 military trucks and armored vehicles including tanks in Idlib province since February. The ongoing deployment includes state-of-the-art air defense systems.

Meanwhile, Russia is shoring up the Syrian military with modern fighter jets and other military hardware.

Ankara secured far less territory in northern Syria than it expected from the three major cross-border offensives it has conducted against the Islamic State and the Kurdish People’s Protection Units (YPG) since 2017. The ultimate aims of its Euphrates Shield (2017), Olive Branch (2018), and Spring Shield (2019-2020) operations were circumscribed by the United States and Russia.

Ankara also failed in its principal aims of eradicating the YPG from the region and establishing a “safe zone” 30 kilometers (18 miles) deep along the full length of its border with Syria. Nevertheless, it appears determined to hold on to what territory it has secured as war clouds gather again over Idlib.

Recent days and weeks have seen a resumption of military operations by Syrian regime forces and the Russian air force in the province. The activity has led many Turkish analysts to believe that the cease-fire negotiated by President Recep Tayyip Erdogan and Russian President Vladimir Putin in Moscow March 5, halting Ankara’s Peace Spring operation against the Syrian army, is not going to last much longer. The Erdogan-Putin talks also did little to resolve the basic problems between the sides with regard to Idlib.

Foreign policy analyst Akdogan Ozkan, who writes for the independent T24 news portal, says Moscow is particularly interested in gaining full control of the strategic M4 highway that stretches from Latakia on the Mediterranean coast to the Iraqi border. Under the accord, the northern part of the highway was left to Turkish control, while Russia would control the southern part. It was also agreed that joint Turkish-Russian patrols would monitor cease-fire violations. Ongoing patrols have, however, failed to defuse increasing tensions.

The accord arrived at in Moscow — as with previous similar accords — tasked Turkey with clearing the region of jihadist elements, most notably Hayat Tahrir al-Sham. Ankara has so far failed to do so, thus giving Moscow and the regime the pretext to resume their military operations.

According to Ozkan, Russia wants to secure the M4 highway in order to make it “one of the main arteries of the country … and provide oxygen for the economy, which will be much more fragile with the latest US sanctions against the regime."

Hamide Yigit, who writes for the news portal Arti Gercek, maintains that “Russia is clearly not in a mood to make any more concessions to Turkey.”

While Turkey got far less than it expected in Idlib out of Moscow during the Erdogan-Putin talks in March, that it was allowed to remain north of the M4 highway was a concession from Russia.

Nevertheless, Moscow continues to insist that all the lands Turkey captured from IS and the YPG should be turned over to the regime of President Bashar al-Assad.

“The resumption of Russian airstrikes and Turkey’s increasing deployments show that military operations in Idlib will resume,” Yigit wrote.

Despite the appearance of continuing close cooperation between Ankara and Moscow in Syria, the bottom line is that Russia and Turkey are rivals in Idlib. The cancellation of the visit by Russian Foreign Minister Sergey Lavrov and Defense Minister Sergei Shoigu to Turkey this week was generally interpreted as a sign that all is not well between the sides.

A new date has not been set for these talks, which were to be held at a time of crucial developments in Syria and Libya, where the sides are also at odds.

Ironically, Ankara is relying on support from Washington to counterbalance Russia in Idlib, despite the fact that Turkey and the United States are rivals in northern Syria east of the Euphrates River.

There is a long list of unresolved issues between Ankara and Washington that are clouding bilateral ties. Washington continues to support the YPG, which Turkey considers to be a terrorist group that threatens its national security. However, this matter appears to have been pushed to the back burner for now by Ankara in the face of what is seen as a graver situation developing in Idlib. Meanwhile, US sanctions under the Caesar Act against Assad and members of his family, including his wife Asma, have been welcomed in Ankara.

The decision by local governments in Idlib — no doubt egged on by Ankara — to start using the Turkish lira as the region’s legal tender follows a similar decision in Aleppo and is also expected to hurt the Syrian economy.

“The departure of nearly a third of Syrians from their national currency may prove to be the nail in the coffin for Syria’s economy,” according to Syria analyst Charles Lister.

Ankara is also encouraged by reports that Russia's patience with the way Assad is running the country may be running out. The ouster of Assad — who now also faces protests in parts of the country under his control — has been a long standing desire of Erdogan's.

In the convoluted state that the Syrian crisis has reached, Washington and its European allies in Syria are encouraging Ankara to take control over Idlib, even as they object to Turkey’s moves east of the Euphrates River against the Kurds.

With no political settlement for Syria in sight, European countries appear happy enough with the gradual “Turkification" of regions in northern Syria west of the Euphrates. That complacency is driven mainly by a deep-rooted fear of a fresh flood of refugees heading to Europe.

Ankara knows, however, that ultimately it cannot rely on the United States, Europe or Russia with regard to its aims in northern Syria. One of its main objectives is to establish a Turkish-controlled region where it can settle the mostly Sunni Syrian refugees in Turkey who have become a political and economic liability. Its other aim is to use this territory to stymie Kurdish aspirations in northern Syria, supported by the West and Russia, for autonomy or semi-autonomy.

Ankara also wants to maintain a strong military foothold in this territory in order to be able to strike at the YPG east of the Euphrates River. Erdogan clearly believes that if Ankara remains as internationally isolated as it is today on the Kurdish question, then Turkey will have to act unilaterally in this regard.

Developments in Libya, where Turkey’s unilateral military involvement has been a game-changer, are also emboldening him.

Turkey’s Syria policy may have been confused and disjointed from the start, leaving Ankara with much less than the Erdogan government expected. However, the disappointment is motivating Ankara to make sure it does not lose what it has already gained.

The long-term financial and political costs of settling in on another country’s territory are questions Erdogan and members of his government are unwilling to consider today. The bottom line for them is that if others are there securing their interests, Turkey has the right to do so too, regardless of what anyone says.