Three Turkish opposition lawmakers lost their parliament seats today over controversial terror convictions as the chamber erupted in howls of protest, opposition deputies banging on their lecterns and shouting "Down with fascism." 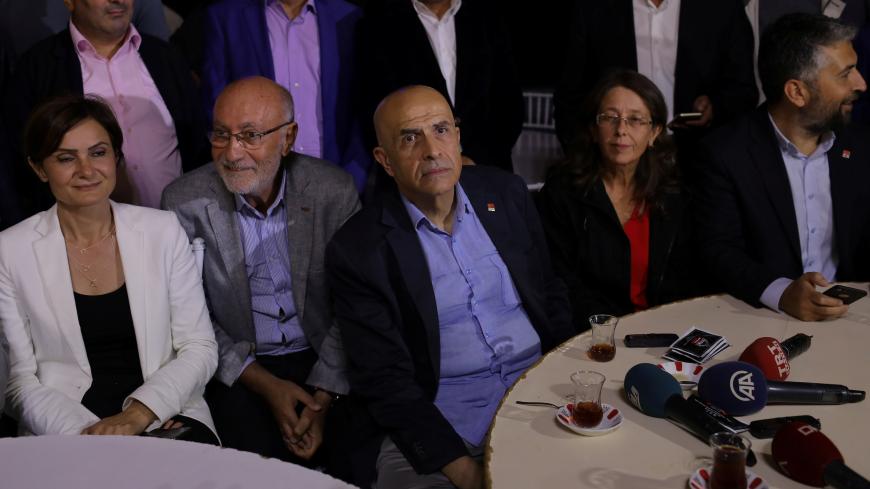 Enis Berberoglu, the first lawmaker from the main opposition Republican People's Party to be jailed amid government purges following a failed military coup in 2016, is seen with his supporters after being released from the prison in Silivri near Istanbul, Turkey, Sept. 20, 2018. - REUTERS/Huseyin Aldemir

Turkey’s parliament stripped three opposition lawmakers of their parliamentary status in a stormy session today after their convictions on assorted terror charges were upheld by an appeals court. Leyla Guven and Musa Farisogllulari of the Kurdish-friendly People's Democratic Party (HDP) and Enis Berberoglu of the main secular opposition Republican People’s Party (CHP) lost their seats in the 600-seat legislature. Hours later Farisogllulari was detained as he set out for Ankara from the mainly Kurdish southeast province of Diyarbakir. There followed news that Guven was detained as well.

The moves are widely seen as part of the government’s ongoing efforts to divide and neuter the opposition. Human Rights Watch Turkey director Emma Sinclair-Webb described it on Twitter as “another sign of the relentless assault on elected opposition parties” and said the three had been subjected to “politically motivated trials in which legal activities were criminalized.”

The chamber is dominated by Turkish President Recep Tayyip Erdogan’s Justice and Development Party (AKP) and his far-right allies from the Nationalist Action Party, which together command 340 seats, giving them a simple majority. The chamber’s power has ebbed ever since Turkey’s executive presidency concentrating power in the hands of Erdogan came into effect in 2017. But changes to the constitution, for example, still require the approval of a two-thirds majority in the parliament. Hence, the opposition still has some teeth and Erdogan appears bent on removing them.

Human rights lawyer Erdal Dogan noted in a telephone interview with Al-Monitor, “In so far as the parliament exists to represent the will of the people, it could have waited for the appeals process to fully play out — that is, for the constitutional court, which also reflects the will of the people, to deliver its verdict on the lawmakers before stripping them of their immunity.” The fact that the AKP and its nationalist allies had not done so amounted to a “rape of justice,” charged CHP lawmaker Engin Altay as the chamber erupted in howls of protest, with opposition deputies banging on their lecterns and shouting “Down with fascism.”

Altay was referring in particular to Berberoglu, who was tried and has already served time for espionage for allegedly leaking images to an opposition newspaper that showed Turkey’s national intelligence agency smuggling weapons to Syrian rebels. His case is being reviewed by the constitutional court.

The HDP lawmakers, from the party’s more Kurdish nationalist wing, are accused of membership of the outlawed Kurdistan Workers Party. The militants are waging an armed campaign for self-rule against the Turkish state. The HDP's  moderate co-chair Mithat Sincar lambasted the stripping of their seats as a "palace coup against the popular will" and vowed to pursue our "struggle for freer tomorrows and our democratic future."

The ejection from the parliament provides further ammunition to HDP hard-liners who say the party should walk out of the parliament altogether. They oppose the party’s efforts under its jailed former leader Selahattin Demirtas to expand from its narrow focus on Kurdish rights to responding to the needs all Turkish citizens.

The change allowed the HDP to broaden its voter base and helped to catapult it over the minimum 10% of national votes needed to win seats in the parliament in June 2015, denting the AKP’s majority for the first time. The elections had to be repeated after Erdogan torpedoed his own party’s efforts to form a coalition with the CHP. The government has since determinedly criminalized the HDP, sending scores of lawmakers and democratically elected mayors to jail on thinly evidenced terror charges.

Erdogan now wants to shatter the new and fragile alliance that emerged last year when the CHP joined forces with the HDP, the right-wing nationalist Iyi Party and the pro-Islamic Saadet to unseat long reigning AKP mayors in Ankara and Istanbul. Kurdish votes proved critical in tipping the balance in the opposition’s favor.

The more radical the HDP grows, the harder it gets for the mainstream opposition to justify cooperating with the Kurdish-led group. And that is what Erdogan is betting on.

At the same time, Erdogan is seeking ways to subvert any further broadening of the alliance through the addition of two new parties that broke away from his own led by the former economy czar, Ali Babacan and former Prime Minister Ahmet Davutoglu.

“I believe we have entered a new phase in the consolidation of the one-man regime,” said Nesrin Nas, an economist and former leader of the center-right Motherland Party.

Nas told Al-Monitor in emailed comments, “All the institutions that form the backbone of a representative democracy, be they to advance civil rights, women’s rights, voters’ rights or labor rights, are perceived by the government as directly challenging its authority.” As such, its main imperative is not to “manufacture public consensus” but to “bring any public resistance under control," Nas contended. “As matters currently stand, remaining in the Turkish Parliament serves only to legitimize the regime the government wants to install.”