Grumbles are growing from senior citizens in Turkey who remain confined to their homes as curfews are lifted for most other Turks. 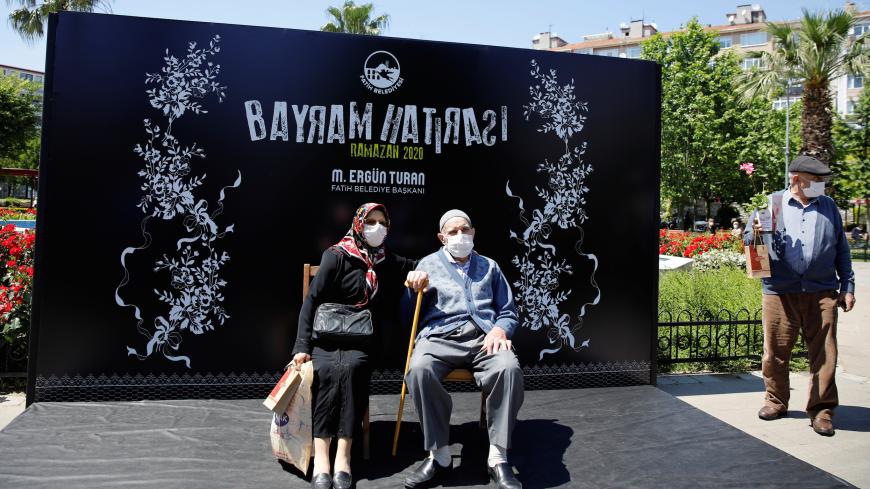 An elderly couple poses for a picture at a park as seniors over 65 are allowed outside for six hours during the first day of Eid, amid the spread of the novel coronavirus, in Istanbul, Turkey, May 24, 2020. - REUTERS/Umit Bektas

From famous intellectuals to ordinary pensioners, Turkey’s senior citizens are up in arms against a government decision to keep them under curfew over the COVID-19 pandemic while greatly relaxing restrictions for others this week.

Turkey ushered in a “new normal” June 1 as most businesses reopened and intercity travel resumed, with the government eager to revive an economy that was already ailing before the pandemic. Yet citizens aged 65 and above, excluding business owners, remain under a curfew introduced March 21, 10 days after Turkey confirmed its first COVID-19 case. A similar restriction remains in place for minors younger than 18.

President Recep Tayyip Erdogan has attributed the ban to the higher risks the coronavirus poses to the elderly, though Ankara’s relaxation plan appears to prioritize the economy and has sparked concerns that the current downtick in COVID-19 cases might become a second contagion wave. The government’s justification has hardly convinced senior citizens, who are allowed to go out for only six hours on Sunday afternoons. Medical specialists, too, have called for a review of the ban, warning that prolonged immobility and social isolation could trigger health issues for the elderly.

Well-known intellectuals are at the forefront of the rising clamor. Poet and academic Ataol Behramoglu is one of them. In a video message June 1, the 78-year-old said, “Am I supposed to start some business or open a grocery to be able to go out? … How is such nonsense possible? I’m calling on all scientists and people of the arts to speak out loudly against this nonsense.”

In remarks to Al-Monitor, Behramoglu decried the curfew as an “illogical, unethical and absurd” measure that lacks any legal and rational grounding. Urging a “full abolition” of the restrictions, he said, “One can go out if they run a shop, but being a poet or a musician is of no importance — you cannot go out. Aren’t musicians working as well?”

The poet disputed the argument that the ban was for the good of senior citizens. “Everyone is at risk. Those running the country are in the risk group as well,” he said. Referring to the free hours on Sundays, he grumbled, “It’s like allowing one to walk their dog on Sundays. It’s humiliating and very disgraceful.” He urged his peers to protest by boycotting the free hours this Sunday.

The sense of being ostracized and discriminated against has been rife among seniors ever since they became the first to face stay-at-home restrictions more than 70 days ago. In the early days of the curfew, videos of young people bullying and ridiculing elderly people who were forced to go out, including a young man who posed as a law enforcement official, sparked a widespread outcry, leading to judicial action against some perpetrators and apologies from state officials.

“Are we plague-ridden or what?” exclaimed actress Gulsen Tuncer in a recent program on Arti TV as she lent support to Behramoglu’s call on senior citizens to stand up against the ban.

Burhan Ozturk, a 65-year-old retired public servant from Izmir, told Al-Monitor, “I don’t feel like I'm in a risk group. I feel one thing only and it’s the feeling of being ostracized. We are the group that knows best how to protect itself. If we are not allowed to go out, then no one should be, including [government] administrators.”

Referring to the revolutionary leftist movement in Turkey in the late 1960s, Ozturk added, “We are the ’68 generation and the fire of revolt is still burning inside us. They’d better not bring us to the point of rebellion.”

For Alaattin Deniz, a septuagenarian from Istanbul, social isolation is the hardest to cope with. “What I miss the most are my children and grandchildren,” he told Al-Monitor, adding that he bought a pet bird to keep him company. “I stay at home, talking to the bird, but it doesn’t understand me,” he joked.

Some senior citizens are planning demonstrations during their free hours on Sunday. Protests are being planned in the Black Sea city of Zonguldak, according to lawyer Senih Ozay, but given the mounting frustration, they are likely to spread to other cities as well.

In a bid to have the restrictions revoked, Ozay has petitioned both Turkey’s Constitutional Court and the Strasbourg-based European Court of Human Rights, arguing that the measures are disproportionate and discriminatory.

Thanks to the law office he runs, the 80-year-old Ozay is no longer subject to the curfew, but home confinement has already taken a toll. “I have difficulty walking and I’m using a cane. There is something odd with my bones,” he said. “I couldn’t do anything at home. I had lost weight, now I’ve put on weight again. I have diabetes. Banning people over 65 from going out amounts to destroying them.”

As the seniors plot their resistance confined to their homes, other Turks are flocking to shopping centers and seaside resorts.