Intel: Pompeo echoes Gantz by bashing Palestinians for refusal to negotiate on annexation

Secretary of State Mike Pompeo blasted the Palestinians today for their refusal to negotiate over a looming Israeli annexation of the West Bank — one day after Israeli Defense Minister Benny Gantz made similar comments, seemingly bringing him closer to Prime Minister Benjamin Netanyahu’s position. 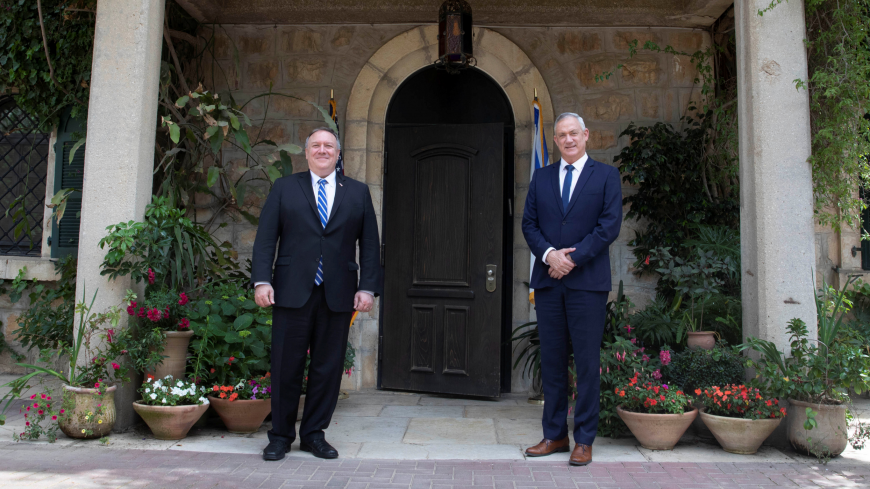 US Secretary of State Mike Pompeo meets with Israeli Blue and White party leader Benny Gantz in Jerusalem, May 13, 2020. - Sebastian Scheiner/Pool via REUTERS

Secretary of State Mike Pompeo blasted the Palestinians today for their refusal to negotiate over a looming Israeli annexation of the West Bank — one day after Israeli Defense Minister Benny Gantz made similar comments, seemingly bringing him closer to Prime Minister Benjamin Netanyahu’s position. Pompeo touted President Donald Trump’s peace plan, which greenlights the annexation of Israeli settlements in the West Bank as well as the entire Jordan Valley.

“Decisions about Israel and extending sovereignty to other places are decisions for the Israelis to make,” Pompeo told reporters at a press conference today. “I regret only that the Palestinian Authority has refused to participate in that. They have simply rejected this out of hand. We simply ask that they come to the negotiating table based on what’s outlined in the vision for peace, and they have chosen not to. They have chosen to threaten, to bluster, to assert that they’re going to deny the ability to do security cooperation.”

Why it matters: Pompeo’s remarks came after Gantz told Israeli reporters Tuesday, “The Palestinians continue to reject dialogue and to remain in their deep shit.” The defense minister went on to say that “we will have to move forward without the Palestinians” if they refuse to negotiate on annexation. Netanyahu had previously stated that the Trump administration wanted Gantz — the alternate prime minister and leader of the rival Blue and White coalition — on board proceeding with annexation as soon as next week. Pompeo met with presidential adviser Jared Kushner, White House envoy for the peace plan Avi Berkowitz, and US ambassador to Israel David Friedman to discuss the timing of the annexation plan Tuesday.

Gulf support? Pompeo also noted that the United States is “talking to all of the countries in the region about how it is we can manage this process for our end-state objective. The Gulf states have all indicated that they are hopeful that we can put them in place,” said Pompeo.

However, the United Arab Emirates envoy to Washington, Yousef Al-Otaiba, warned that annexation would harm Israeli efforts to normalize relations with the Emirates and other Arab states. The UAE has been the most bullish Gulf country on normalizing ties with Israel, and Otaiba’s op-ed in Yedioth Ahronoth marks the first by a Gulf diplomat to appear in an Israeli publication.

What’s next: Getting Gantz on board would greatly bolster the odds that Netanyahu could get the Knesset to pass annexation legislation as soon as July 1. However, Foreign Minister Gabi Askhenazi, another key Blue and White leader, reportedly still opposes the annexation proposal.

Know more: House Republicans have chimed in too. The majority of the caucus signed onto a letter to Netanyahu this week urging him to go ahead with annexation irrespective of what the United States or other actors think, Congressional Correspondent Bryant Harris reports.