Will Moscow save the West Bank from annexation?

The Palestinian leadership is looking to Russia for help resisting Israel's annexation plans. 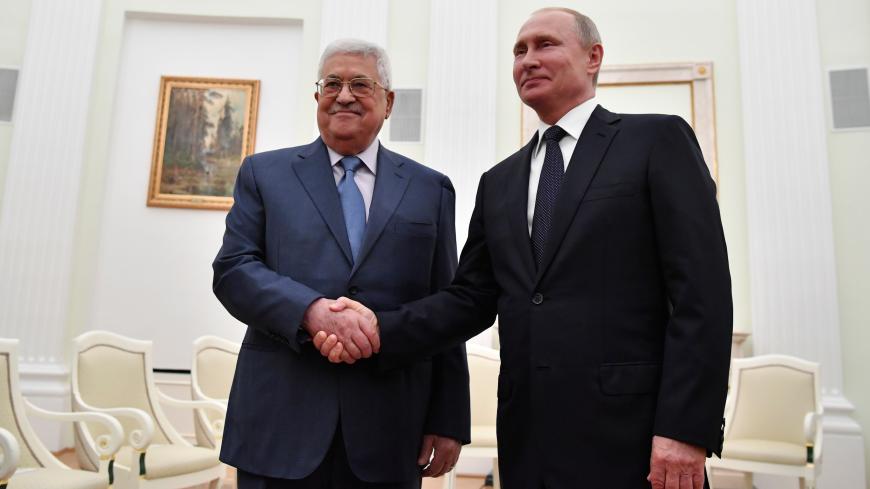 Palestinian efforts against Israel's plans to annex Palestinian territory are being exercised on three levels. Locally, Palestinians have severed all relations, including security coordination, with Israel and the United States. Regionally, Jordan has been spearheading the Arab response to the Israeli plan, including efforts by the only two Arab countries that have a peace plan with Israel: Jordan and Egypt.

The May 24 meeting of the Quartet failed to reach an agreement because of the insistence of the American representative that the only basis of any future talks must be the American vision. Avi Berkowitz, a special adviser to President Donald Trump, insinuated to the Jerusalem Post that the Trump vision is the only game in town.

The idea of an international conference held in Moscow was first suggested during the peace talks in Annapolis in 2007, but the idea hit a wall since. However, Palestinians' stubborn refusal to deal with the American plan, President Mahmoud Abbas’ refusal to engage in any negotiating process sponsored only by the Americans and Israeli Prime Minister Benjamin Netanyahu’s refusal to meet have all derailed efforts to have a Moscow peace conference.

Palestinian Foreign Minister Riyad Malki has suggested the possibility of Palestinian-Israeli talks via Moscow. In a press conference with foreign journalists on June 2, Malki said that the Palestinian leadership would not mind visiting Moscow.

“We trust President Vladimir Putin and are sure that such a meeting will bring fruits and succeed in getting us back to the talks as well as stopping the Israeli plans to annex parts of the occupied West Bank,” Malki was quoted as saying.

While Netanyahu and Putin are known to have a close relationship — having met dozens of times in recent years — Moscow has opposed annexation. In May, Russian Foreign Minister Sergey Lavrov relayed the Kremlin's “strong objection” to the plan to his Israeli counterpart.

Ofer Zalzberg, a senior analyst with the International Crisis Group, told Arab News June 3 that Moscow is engaging separately with the White House and Ramallah regarding the possibility of negotiations to curb or postpone annexation.

Majdi Khaldi, a diplomatic adviser to Abbas, told Al-Monitor that the US administration has torpedoed every attempt to reestablish peace talks. “The Americans want the talks to restart based on their plan while their own partners in the Quartet insist that talks must be based on international law.”

Abbas has called for talks to be established within the Quartet or the Quartet-plus (adding important other countries such as Egypt, Germany and China). But Khaldi told Al-Monitor, “It is not enough to agree on who will participate in the talks but also what is the basis of the talks.” He said that it can't simply be the two-state solution. “If the Americans agree to the two-state solution, it must be clear that we are talking about the 1967 borders of an independent Palestinian state.”

Jamal Zakout, one of the leaders of the first intifada, told Al-Monitor that the international community might pressure Israel to delay its actions in order to give Abbas some space and to show that he has succeeded in stopping the annexation, but that with pressure from Arab states and Russian intervention, they will want to force the Palestinians to negotiate on American terms.

Palestinian leaders are also facing internal pressure not to hold any meetings with Israelis. Former Palestinian intelligence chief Tawfiq Tirawi criticized Malki’s initiative in a June 2 Facebook post. Tirawi, who is also a member of the powerful Fatah Central Committee, called on Malki to go home and end his failed diplomatic efforts.

“At the present time we don’t need to beg Israel to attend a meeting in Moscow. We need to energize our base to stand up to the Israeli violations of international law,” he added.

Salwa Hdaib, a member of the Fatah Revolutionary Council, also criticized Malki. She told Al-Monitor that the Palestinian foreign minister is buying time to stay in his job longer. “This is a nasty idea that encourages normalization with Israel,” she said.

Al-Monitor has learned that there are efforts to arrange for Israel's newly elected defense and foreign ministers to meet with some key Arab leaders, including Jordan’s King Abdullah, to help convince them of the colossal repercussions that any unilateral annexation will have on the chances of peace in the region.

Al-Monitor has learned that the June 1 phone call between Lavrov and UN Secretary-General Antonio Guterres that was reported to be about Libya and Syria also included discussion of a possible meeting of the Quartet at the ministerial level to discuss the repercussions of a possible unilateral Israeli decision to annex large swaths of Palestinian lands.

The presence of Russia and its troops in nearby Syria means that its interest in solving the Palestinian-Israeli conflict is not theoretical. It is still unclear if the Israeli leader who has twice refused to meet in Moscow with Palestinians will agree to any new invitations. If Israel does agree to meet in Moscow or under Russian auspices, it could be seen as a breakthrough that might delay or cancel the illegal unilateral annexation that Israel is supposed to begin on July 1.