In an exclusive interview, Palestinian Foreign Minister Riyad al-Malki said he would accept an official invitation to visit Tehran if such an offer were made. 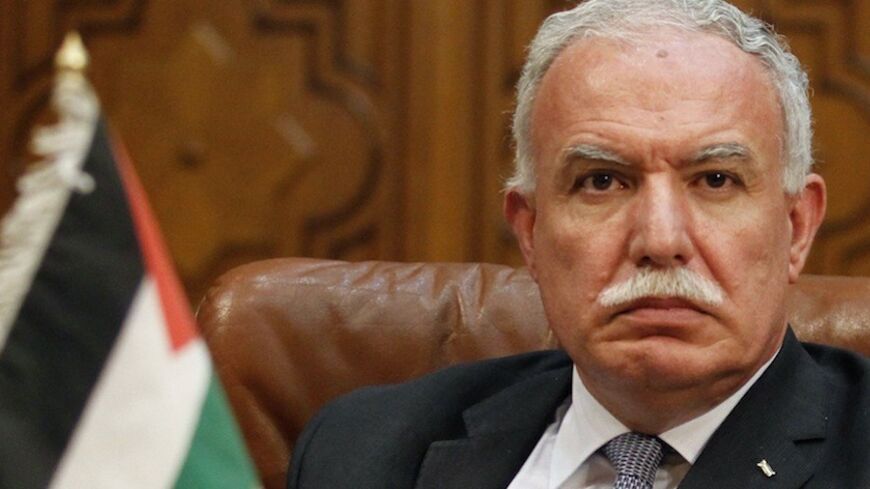 Malki’s public openness to the Islamic Republic followed a high-level January visit by Fatah Central Committee member Jibril Rajoub to Tehran, where he met with Iranian Foreign Minister Mohammad Javad Zarif. Although Malki said Rajoub’s visit was not officially sanctioned by the ministry, he is open to further engagement with Iran.

Concerning peace talks with Israel, the top Palestinian diplomat reiterated his support for a third-party force to replace the Israeli army “anywhere” in the occupied territories. The comment came after Israeli Prime Minister Benjamin Netanyahu reportedly rejected the idea of NATO forces replacing Israeli troops in the occupied Palestinian territories, but said he would consider a third-party force.

Malki also defended the ministerial visits from the Ramallah government to Damascus as necessary to remain neutral in the Syrian conflict, saying, “We need to keep our neutrality and make sure that our people are not drawn into the violence. That is why it is imperative that we have good relations with all sides.”

As for the situation in the Gaza Strip, Malki rejected accusations that the Ramallah government is colluding with Egypt to tighten the siege, stressing that his government continues to pay the bills in Gaza. He said, “More than half our budget goes to pay salaries in Gaza. We pay the electricity and water bill for Gaza in full, even though Hamas collects the money from the people for it."

Malki ruled out a visit by President Mahmoud Abbas to Gaza, saying, “He should not go with Hamas in power.”

The foreign minister also reiterated his government’s controversial decision not to support an international boycott of Israel, but approved the boycott of the settlements. His comments come in the context of the storm created by actress Scarlett Johansson’s decision to leave global charity Oxfam over her work as a representative for Israeli company SodaStream, which has a factory in an illegal Israeli settlement in the West Bank.

“We can’t call for boycotting Israel while we negotiate with them. Settlements are illegal and illegitimate — and all that comes out of them — and the president opposes settlements and supports boycotting them.”

Al-Monitor: The Palestinian Foreign Ministry, and you in particular, put a lot of effort into producing the UN recognition of the state of Palestine. Israel and the United States criticized the effort as a waste of time. A year and a half later, was the effort worth it?

Malki: For sure, it was worth it. We are now recognized as a nonmember state. Not as an entity or the PLO, but as the state of Palestine, and this is how we are referred to in all forums: State of Palestine. We are even asked to contribute to the budget of the United Nations, which we will do. We have contributed as a state to choose and vote for new judges in the International Court of Justice. We can apply to many UN agencies and sign international treaties.

Al-Monitor: But this was not done.

Malki: OK, that option is available to us. We have the luxury to use them or not. It is our own decision. We can decide now, if we choose, to join all these organizations and sign these treaties. We decided to postpone, and part of it is our international responsibility. We don’t want to alter the international order. We saw what happened with UNESCO and [the subsequent] US withdrawal. We can join these organization, but we don’t want to be spoilers for the sake of spoiling the international order. This is not a weakness; it is a strength and the Americans, including Kerry and even the Israelis, know that. This is why the president was able to extract an agreement to get 104 long-term Palestinian prisoners [released from Israeli jails]. Some Western countries have upgraded Palestinian representation, like some Scandinavian countries that changed their laws to accommodate the Palestinian representation.

Al-Monitor: The lead story in Sunday’s Al-Quds newspaper quotes US Secretary of State John Kerry as saying that Israel refuses NATO forces, but might accept third-party forces. Isn’t this encouraging, as it’s the first time Israel has entertained the idea of allowing third-party forces? And is their concern just limited to NATO?

Malki: When President Abbas talked to [former Prime Minister Ehud] Olmert about third-party forces, Olmert replied, "I hope you are not planning to bring Arab forces." So President Abbas said, "You don’t want Arabs, fine, we can get non-Arabs." Olmert replied, "I hope you don’t bring Turks and Indonesians." President Abbas said, "How about NATO?" [Then-US President] George W. Bush also agreed to the idea, but said that it should be US-led NATO forces. President Abbas went further and insisted that American troops of Jewish origin were welcome. As to the questions about NATO or not, Palestinians accept any third party. We thought NATO would put the Israelis at ease. NATO holds exercises with Israel. They are sophisticated and highly professional, and we expected having them would ease things for Israelis.

Al-Monitor: Is the NATO idea just for the Jordan Valley or throughout all Palestinians areas?

Malki: We have no problem with a multilateral third-party presence anywhere.

Al-Monitor: Turning to Syria, the Palestinian position seems to have shifted. At one time, the position was strictly neutral. Now you seem to be moving closer to the Syrian regime. Your fellow minister Ahmad Majdalani adopted the [Syrian President Bashar al-] Assad government’s narrative regarding the siege on Yarmouk, and that it is the result of armed groups?

Malki: No change has taken place regarding Syria. We still believe in a political solution that safeguards Syria and its territorial integrity. We are interested in Syria and its position on the Palestinian cause. We are also concerned about 600,000 Palestinians living in Syria.

Al-Monitor: The Arab League withdrew its recognition of the Assad regime, but Palestinian ministers met with him. How do you explain that?

Malki: Our responsibility is to safeguard our people and protect them. Our embassy in Damascus is one of the few embassies still working, and we need to keep our neutrality and make sure that our people are not drawn into the violence. That is why it is imperative that we have good relations with all sides.

Al-Monitor: What about Syria’s main sponsor, Iran? Is Palestinian policy warming up toward the new Iranian government?

Malki: We have normal relations with them.

Al-Monitor: Jibril Rajoub visited Tehran recently; what was that about? Did he go as a representative of Fatah, or in the name of the Palestinian government?

Malki: No, this has nothing to do with our foreign policy, which is decided at the president’s level and at the ministry level.

Al-Monitor: Does the Palestinian government have an operating embassy in Tehran?

Malki: Yes, we have an embassy, and we have attended official meetings with Iranians outside the region. I see Foreign Minister Zarif at many meetings. If an official invitation is directed to me, I will accept it. If they choose to invite the president, I would go and prepare for such an official visit.

Al-Monitor: Iran brings us to the discussion about the besieged Gaza. Hamas accuses the Palestinian government of complicity with the new powers in Egypt to tighten the siege to bring the downfall of Hamas.

Malki: This is totally untrue. We are the major supporter of Gaza and all it needs. More than half our budget goes to pay salaries in Gaza. We pay the electricity and water bill for Gaza in full even though Hamas collects the money from the people for it. We provide health coverage for those in Gaza needing to be treated outside. We keep trying to find a solution to the situation in Gaza through political means. The latest decision from Hamas allowed in three senior leaders from Ramallah who are now in Gaza and meeting with Hamas leader Ismail Haniyeh. President Abbas also met former Deputy Prime Minister Abdel Nasser al-Shaer at the Muqata in Ramallah.

Al-Monitor: Gaza parliament member Rawia Shawwa called on President Abbas to make a surprise visit to Gaza. What do you think of the idea?

Malki: He will visit Gaza, but not now. When the situation is ripe — now there is nothing to be accomplished.

Al-Monitor: He can give people hope.

Malki: He will give hope when the split ends. He should not go with Hamas in power.

Al-Monitor: The Palestinian leadership seems to be sending mixed signals about the Boycott, Divestment and Sanctions movement [BDS]. President Abbas, in South Africa, opposed any boycott of Israel, while some PLO officials hail BDS. Boycotts are a nonviolent weapon and Abbas needs it to strengthen his negotiating hand.

Malki: We have a democratic rule, and PLO leaders are able to express their opinion. Officially, we are in peace talks with Israel on the two-state solution. The idea of a boycott of the State of Israel is not on the books. We can’t call for boycotting Israel while we negotiate with them. Settlements are illegal and illegitimate — and all that comes out of them — and the president opposes settlements and supports boycotting them.

Al-Monitor: The SodaStream case has drawn comments, such as the Palestinian plan to turn over Ma'ale Adumim to Israel anyway, and that if the factory moves into Israel, many Palestinians will lose their jobs.

Malki: We have never specified which settlements will be included in the land swap. As to the workers, we ask the world to help us improve our economy so that everyone can find work.

Al-Monitor: Prime Minister of Jordan, Abdullah Ensour ,called from parliament for the Palestinians to be more transparent with Jordan regarding the peace talks. What is your response?

Malki: Coordination exists with Jordan at a very high level. President Abbas and His Majesty King Abdullah are in constant touch. We are continuously holding sessions of coordination and briefing with His Majesty. It is the king’s role in deciding the level and content of what he transmits to his own government. Our relations are not based only on coordination, but also we seek the advice of His Majesty King Abdullah. Jordan is a strategic country and a strong ally of the West, and we count on Jordan to support us in international forums and meetings, including the upcoming meeting His Majesty will have with US officials during his current visit to Mexico and the United States.

Al-Monitor: Jordanians are worried about not being able to reclaim the costs of decades of hosting Palestinian refugees.

Malki: This issue is well-covered in the talks. There will be an international fund that will support refugees as well as covering the costs that host countries like Jordan have endured.

Al-Monitor: Former Jordanian parliament member Marouf al-Bakhit has suggested that at least one Jordanian official attend the bilateral talks. Do you agree?

Malki: As you described it, these are bilateral Palestinian-Israeli talks. We nevertheless are sure to brief our Jordanian brothers before, during and after every round of talks. And they are satisfied with our coordination.