Palestinian PM says he is 'bitterly disappointed' in US

In an interview from Ramallah with Al-Monitor, PA Prime Minister Rami Hamdallah says Palestine is ready for statehood as soon as Israel ends the occupation. 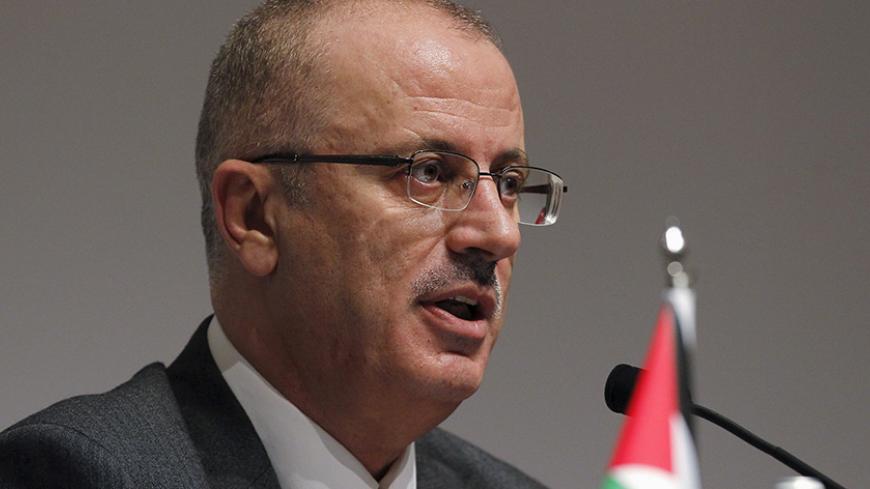 Palestinian Prime Minister Rami Hamdallah speaks to journalists during a news conference on the sidelines of the Asian African Conference in Jakarta, April 21, 2015. - REUTERS/Beawiharta

Since being appointed Palestinian prime minister in June 2013, Rami Hamdallah has run a tight economic ship, earning him praise from Christoph Duenwald, the local representative of the International Monetary Fund (IMF). Hamdallah proudly showed Al-Monitor a Feb. 11 IMF statement acknowledging the reduction of the Palestinian deficit to nearly 1% of gross domestic product (GDP).

Praise from the IMF aside, Hamdallah said, “As prime minister I am bitterly disappointed when it comes to the US.” During an interview with Al-Monitor in his Ramallah office, Hamdallah explained that although US support in 2010 reached $1.45 billion, in 2015 Washington pledged to provide $290 million but only delivered $130 million. The remaining $160 million was frozen by Congress.

These days, Hamdallah is also frustrated about Arab funding for the Palestinian government. “Only Saudi Arabia and Algiers have carried out their pledges to Palestine,” he said. Although the Palestinians have only received 28% of the $4.9 billion pledged by the international community to help reconstruct Gaza, the clean up of the rubble has almost been completed, and the power grids destroyed by Israel have almost all been rebuilt. Hamdallah revealed that the Ramallah government spends NIS 420 million ($111 million) in Gaza monthly while only taking 15-20 million shekels ($4-5.3 million) in tax revenues and fees each month.

Al-Monitor:  Palestine will be submitting a UN Security Council resolution on settlements. What is your position in light of the US asking Palestine to delay the UN track?

Hamdallah:  We are in the process of consultations now, but we will submit a resolution to the United Nations Security Council this month. The US objections are not new. They always want us to wait. They have ready excuses and justifications. There are the primaries, then the general elections, then the midterms. They are always wanting us to wait for this or that reason. We have been under occupation for 49 years, and it is 68 years since the Nakba. The international community including the US keeps saying that the settlements are illegal and illegitimate. If now is not the time to put an end to illegal settlements, when is the right time?

Al-Monitor:  Does the UN Security Council approach complement or contradict the French initiative for an international conference?

Hamdallah:  Neither. There is no specific French initiative. The French are still in the early stage of discussions and consultations, and we are actively working with them. They would like to set up international working groups. We are not opposed to this approach and will do what we can to make this and any other serious international effort work.

Al-Monitor:  It seems that the Palestinian cause has taken a back seat these days. Does this give you a chance to work on building the institutions of government?

Hamdallah:  The Palestinian cause is the heart of the Middle East struggle, and finding a solution to the Palestinian cause is an integral part of any comprehensive solution for the region. As for the work toward a Palestinian state, we are still under the occupation. Yet, according to the latest report of the IMF, we are totally ready for sovereignty and full statehood. Even though we are under occupation, we are ranked better than 80 countries in the world in terms of having proper working institutions of government. The only thing missing for us is the need to end the Israeli occupation, and the very second we will be a full-fledged, totally functioning sovereign state.

Al-Monitor:  Funds for Palestine have dropped off. What have you done to make up for that, and what are the priorities of your government?

Hamdallah:  Despite some very difficult years, the latest report by the IMF stated that we have “managed economic policies well, reducing the overall deficit for the third consecutive year.” The report, issued in February by the IMF’s Christoph Duenwald, estimated that our fiscal deficit has “declined by close to one percentage point of GDP, reflecting strong revenue performance and successful efforts to contain spending.” He even described our 2016 budget as “prudent” and praised our “revenue mobilization and spending controls.”

The deficit in this year’s budget is $1.2 billion. We have received $685 million from donors, and we are still short $515 million. We are unable to use 64% of our lands, which Israeli has declared areas C. [It] doesn’t allow us to access our own lands and resources. Moreover, part of the deficit is from unfulfilled pledges of support. Saudi Arabia and Algiers are the only Arab countries totally fulfilling their pledges. The European Union also has been steadfast in carrying out its pledges.

Al-Monitor:  What about the US support?

Hamdallah:  As prime minister, I am bitterly disappointed when it comes to the US. In 2010, the US annual support reached $1.45 billion. In 2015, the US pledged to provide us with $290 million and has only delivered $130 [million]. Only $35 [million] is in general support. The US pays directly toward our energy bills and East Jerusalem hospitals. [The other] $160 million of pledged funds have been frozen by Congress. In contrast, the US is reportedly pledging $34 billion in military aid to Israel over several years, and the Israeli prime minister apparently is not happy. [Benjamin] Netanyahu is said to want $40 billion.

Al-Monitor:  Gaza continues to dominate the Palestinian government’s attention. How has your government been able to deal with what people call the Hamas shadow government?

Hamdallah:  We are totally committed to supporting our people in Gaza, paying salaries, covering the cost of electricity, as well as [having] direct involvement in the rebuilding of Gaza. We spend every month around 420 million Israeli shekels and are only able to collect 15-20 million shekels in taxes and fees.

Al-Monitor:  How is the rebuilding process going in Gaza?

Hamdallah:  We have only received 28% of the $4.9 billion pledged by the world community in October 14, 2014, to Gaza. Yet we have succeeded in clearing up 95% of the destroyed homes. We have removed and recycled 2 million tons of materials from destroyed homes and buildings. We have also restored 95% of the power grids that the Israelis destroyed.

Al-Monitor:  Keeping the West Bank and Gaza strategically divided appears to be a high, strategic Israeli priority. What can you do to counter that?

Hamdallah:  Gaza is an integral part of Palestine, and nothing that the Israelis do will take away this important part of our homeland or succeed in dividing us.

Al-Monitor:  After Israel said it will allow Gazans to leave for Jordan through the West Bank, on the condition that they not return for one year, Jordan began denying entry to all Gazans, including those Gazans who changed their residency to the West Bank. Is your government taking up their case with your Jordanian counterparts?

Hamdallah:  I am not aware of this Israeli decision, but we are in constant touch with our Jordanian partners, and we have excellent cooperation at all levels. Civil Affairs Minister Hussein al-Sheikh is following up on these issues.

Al-Monitor:  The teachers strike left a bad feeling among many, especially those early days when Palestinian security prevented demonstrators from reaching Ramallah and your offices. What have been the lessons learned from the teachers strike and the government's response to it?

Hamdallah:  I am an educator, and we are totally committed to giving our students the best education. In all of the world, strikes are carried out in a legal manner, which starts with declaring a labor dispute, and then 51% of the general assembly must agree on a strike, which didn’t happen. Nevertheless, thousands went on strike, and at least 3,000 blocked traffic outside the Prime Ministry headquarters. The issue is resolved now. It is true that some mistakes were committed earlier, but this was resolved, and our teachers are back now, and we didn’t deduct anyone's salary.

Al-Monitor:  Relations with the Arab world, especially Jordan, don’t appear to be going well. What is the problem with Jordan and some of the other countries?

Hamdallah:  His Majesty King Abdullah II of Jordan and President [Mahmoud] Abbas have excellent relations. We have constant contacts with Jordan. As to the rest of the Arab world, there is a top-level Arab meeting soon, and Arab states have agreed to monthly support of $100 million to the state of Palestine. We hope it will be carried out this time.

Al-Monitor:  Is Jordan still upset about forcing them to table a resolution that ultimately failed to get the nine votes in the Security Council?

Hamdallah:  We have long gotten past this issue. Last week, Foreign Minister Nasser Judeh was here, and we supported the decision of His Majesty to install cameras on Al-Aqsa Mosque. We are also coordinating all our upcoming moves with Jordan, Egypt, Saudi Arabia and others.

Al-Monitor:  Human rights and press rights have deteriorated under your administration. International and local human rights organizations have accused security forces of making unlawful arrests and there being general retractions of human rights and personal freedoms.

Hamdallah:  I totally support the rights of our people, and I am a big supporter of the rights of journalists. The situation of freedoms in Palestine is much better than in nearby countries. We are also witnessing on a daily basis the Israeli violations of Palestinian human rights.

Al-Monitor:  ​How serious is your government in pursuing the new social security system. Has the criticism of the new law dampened your drive?

Hamdallah:  ​This law was approved and signed by the president and was published in the official gazette. We are open to any comments by our people, and we will make the appropriate adjustments as needed. Yet, we will not retract this important law, which will protect our people, be they workers or employers, in the long term.