Mohamed Monir, 65, is charged with joining a terrorist group and spreading false news. 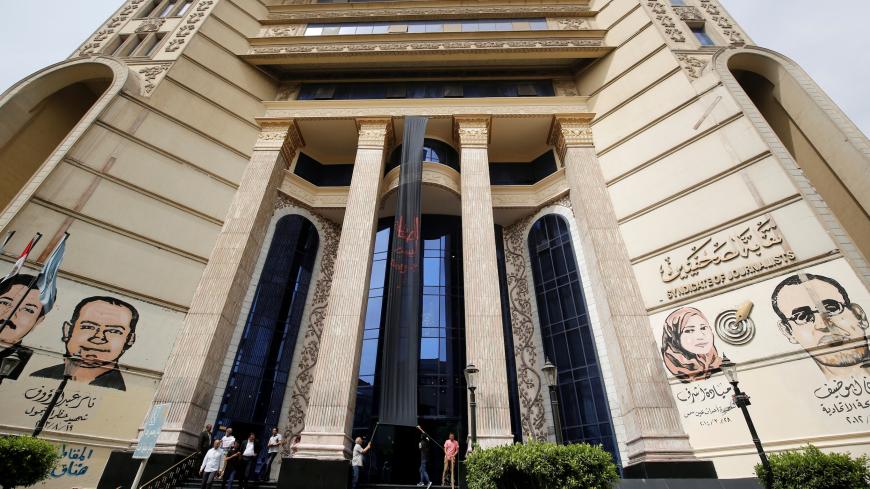 A black sign reads "The press, It is not a crime" on World Press Freedom Day at the Egyptian Journalists Syndicate's headquarters in downtown Cairo, Egypt, May 3, 2016. - REUTERS/Amr Abdallah Dalsh

Egypt has arrested a prominent journalist who gave an interview to Qatari TV channel Al Jazeera, his family said in a statement.

Mohamed Monir, 65, was taken from his apartment in Sheikh Zayed by secret police early Monday, according to his family.

He was charged with joining a terrorist group, spreading false news and misusing social media, reported the New York-based Committee to Protect Journalists. He will reportedly be held in pre-trial detention for 15 days.

“Egyptian authorities must immediately and unconditionally release journalist Mohamed Monir and drop these baseless charges,” CPJ said. “Monir is already in failing health, and to detain him pending trial during a pandemic is exceptionally cruel.”

Monir’s arrest came after he says police raided his home and searched through his belongings over the weekend. Surveillance video Monir posted to Facebook appears to show officers breaking down his door.

On Sunday, Al Jazeera published an opinion piece written by Monir that criticized the Egyptian government’s handling of the coronavirus. Al Jazeera is owned and funded by Qatar, which supports the Muslim Brotherhood, an organization blacklisted as a terrorist group by Egypt.

Monir’s family suggested his arrest was actually related to comments he made during an interview on Saturday about a controversy that erupted when Egyptian magazine Rose al Yusuf published a cover deemed offensive by the Coptic Church.

“It was merely an expression of opinion and he did not say anything that could be deemed offensive to the nation or national unity,” Monir’s family wrote.

Paris-based advocacy group Reporters Without Borders called Monir’s arrest “symptomatic of the difficulties” faced by other journalists working in Egypt.

“A journalist was taken from his home without a warrant just hours after an appearance on a TV channel that is banned in his country to discuss a controversy involving a media outlet," said Sabrina Bennoui, the head of the group’s Middle East desk. “Mohamed Monir must be released at once.”

A veteran journalist, Monir had worked as an editor for various news outlets, including as editor-in-chief of Al-Diyar newspaper and the deputy editor of the pro-government Al-Youm Al-Sabae. He is also a member of Egypt’s Journalists Syndicate.

Egypt is considered one of the world’s worst abusers of press freedom. Reporters Without Borders ranked the North African country 166th out of 180 countries in its 2020 World Press Freedom Index. In May, security forces briefly detained Lina Attalah, the editor-in-chief of one of the country’s last major independent news outlets, Mada Masr.