Israeli Prime Minister Benjamin Netanyahu is praying for US President Donald Trump to win reelection, but security experts worry that he might lose interest in the Iran conflict. 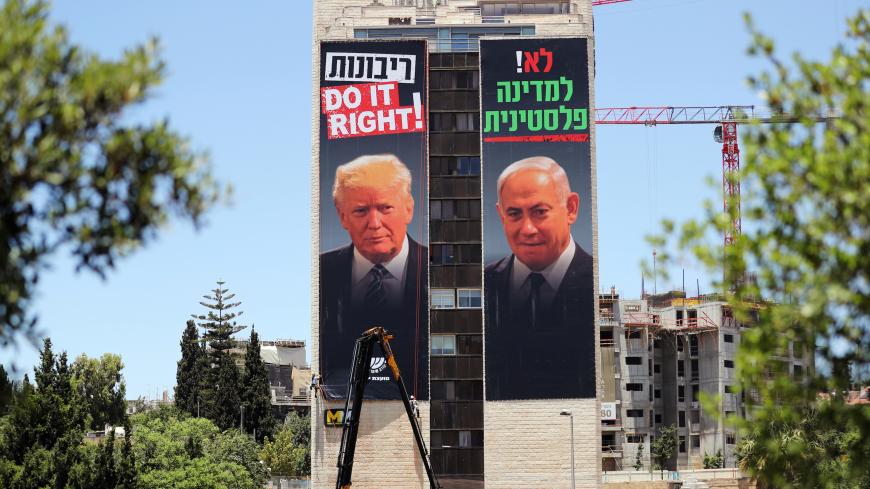 A laborer puts up banners showing US President Donald Trump and Israeli Prime Minister Benjamin Netanyahu and bearing the words in Hebrew, "No to a Palestinian State" and "Sovereignty, Do it Right!," part of a new campaign by the Yesha Council settler organization in Jerusalem, June 10, 2020. - REUTERS/Ammar Awad

For Israel, this coming November will be a turnaround month. With all due respect to Prime Minister Benjamin Netanyahu’s West Bank annexation plans, Israel’s security forces are eyeing a far more distant issue, still the main strategic threat facing the country: The ayatollah regime in Iran.

Israel is awaiting the US presidential elections, and so are the Iranians. The tense waiting period is unlikely to see any changes in the war the two sides are waging against each other — Iran with Hezbollah’s backing and Israel with US support. Western and Israeli intelligence assessments place Iran on the edge of a precipice, with its foreign currency reserves forecast to run out at the end of the year. Iran’s economy is undergoing a rapid, painful downturn.

“They are losing their public and they know it,” a senior Israeli security source told Al-Monitor on condition of anonymity. “They understand that they will be unable to last long, given the current state of affairs, and are placing their hopes on the replacement of the Trump administration by an administration with which they can make a deal.”

This Israeli intelligence assessment comes with a caveat: The Iranians could end up concluding that they have no choice other than negotiating with President Donald Trump should he be reelected. However, Israeli intelligence experts are having a hard time providing a confident assessment of how Trump might respond to such an Iranian switch. They are not alone in that difficulty. Trump, as depicted in the upcoming tell-all book by his former national security adviser John Bolton, is a highly unpredictable leader.

Israel believes Iran has a clear preference and is fervently praying for Democrat Joe Biden to win. Israel’s position is more complex. Netanyahu is praying for a Trump win. On the other hand, while Israel’s security agencies are highly appreciative of the continuous and relentless pressure exerted by the administration on the Iranians, they are nonetheless concerned that when the time comes, the US pressure will dissipate or become ineffectual. Israel would find itself facing a dramatic choice if the Iranians are pushed into a corner and conclude that they must go for a nuclear breakout. Should that happen, only a military strike could sink an imminent Iranian nuclear breakout quickly enough.

At this point, only the United States is capable of landing such a blow. Does Israel have a military option that could damage or delay an Iranian nuclear plan? The answer to that question is a state secret. However, Western experts believe that Israel's military option has eroded over time. The Iranians, meanwhile, have entered what then-Defense Minister Ehud Barak called an “immunity zone.” The prevailing assessment in the United Kingdom, Germany, France and Russia as well as the United States is that Israel is no longer as able to delay the Iranians as it was a decade ago.

The inescapable conclusion of this analysis is that within months, Israel could find itself with its fate in the hands of a foreign power, specifically in those of the president of the United States. If he wins reelection, Trump will be the only one able to block Iran’s potential race to a bomb. It is hard to find anyone in the Israeli defense establishment who would willingly leave their fate or that of the state in Trump’s hands. Therefore, many Israeli security and intelligence officials may not partake in Netanyahu’s prayers for a Trump victory.

With President Joe Biden, they would at least know where they stand. Israeli intelligence assessments foresee Biden reopening negotiations with Iran on the nuclear agreement with world powers. Even if a new agreement is not much better than that achieved by President Barack Obama, some of Israel’s security chiefs view it as less dangerous than the alternative, which entails too big a gamble.

Meanwhile, the two sides continue to clash. The cyber battle allegedly waged between Jerusalem and Tehran a few weeks ago ended in a clear Israeli knockout. “They were unable to cause any damage here,” a senior Israeli intelligence source told Al-Monitor on condition of anonymity. “They managed to damage one water plug for a few minutes, that’s all.” According to foreign reports, Israel’s counter-strike following the cyber attack on its water distribution system crippled Iran’s largest naval port for two to three weeks. Israel did not claim responsibility, but no one in the cyber world has any doubt about Israel’s capabilities and clear superiority over Iran in this sphere. Cyber experts believe Israel has many varied tools ready for use in this arena.

The conflict between the sides is also ongoing on Syrian soil, and Israeli intelligence is closely monitoring domestic developments in Iran. Israel believes conservative forces and the Islamic Revolutionary Guard Corps are exerting heavy pressure on President Hassan Rouhani and the Reformist camp to toughen Iran’s posture ahead of November.

“The Iranian public is the problem,” an Israeli analyst said on condition of anonymity, calling the scene reminiscent of Gaza. "[Hamas Gaza leader] Yahya Sinwar knows that the only thing his public cares about right now is the economy, so he is investing everything he has in improving the situation. The situation of the Iranian regime is worse, because the Iranians are not as used to hardships as the Gazans are. Still, at this stage, their government is not abandoning its investment in propagating the revolution in favor of economic recovery. We will have to wait for November.”