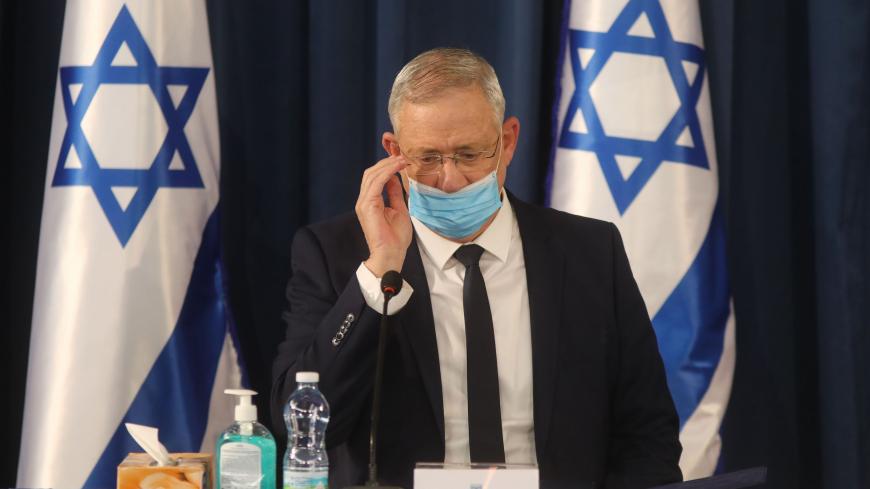 Israeli Defense Minister Benny Gantz attends the weekly cabinet meeting in Jerusalem while wearing a protective mask due to the COVID-19 pandemic, on June 7, 2020. - MENAHEM KAHANA/AFP via Getty Images

Two days before July 1, Defense Minister Benny Gantz said that annexation should not be rushed through this week and the timeframe is not set in stone. Speaking at a June 29 meeting with American peace envoy Avi Berkowitz and US Ambassador to Israel David Friedman at his Tel Aviv office, Gantz reportedly said that the move can wait until after Israel deals with more pressing issues such as the coronavirus crisis. The unity deal signed between Gantz and Prime Minister Benjamin Netanyahu last April enables Netanyahu to bring annexation for a vote on July 1. Netanyahu has pledged to stick to the date.

A source closed to Gantz quoted him as saying at the meeting, “July 1 is not a sacred date. Dealing with the coronavirus and its socioeconomic and health consequences is the more pressing issue that needs to be tended to right now.” Gantz said that Israeli citizens are troubled by the coronavirus crisis and expect it to be addressed rapidly and seriously.

While minimizing the importance of the date set by Netanyahu for implementing Israeli sovereignty on West Bank settlements, Gantz hailed President Donald Trump’s peace plan, referring to it as “a historic step that constitutes the best framework to promote the Middle East peace process." Gantz added that the plan "should be advanced with our strategic partners in the region and with the Palestinians to arrive at an outline that benefits all sides in a responsible, proportional and reciprocal manner."

On June 26, Gantz posted on Facebook that he was willing to open talks immediately if the Palestinians ask seriously to negotiate. "Too many years we did not strive for peace and for an arrangement with the Palestinians. I maintain a vigorous dialogue with all the actors — Americans, Europeans and others — to see if we can jump-start a diplomatic process based on the American peace plan. … If [the Palestinians] request to have serious negotiations I’m ready to be in Ramallah tomorrow morning." Gantz also reiterated his position that Israeli sovereignty will not be implemented in areas where many Palestinians live or travel. He added that any Palestinians living in annexed areas would enjoy equal rights with Israelis and that he will continue to advance efforts to work bilaterally with the Palestinians.

Berkowitz arrived to Israel with Friedman after holding extensive discussions in the White House over Netanyahu’s annexation plan. The Trump administration has reportedly failed to reach any final conclusions, prompting Berkowitz’ trip. The Jerusalem Post cited multiple American sources as saying that Israel will not take steps this week to extend its sovereignty in the West Bank.

Several reports are claiming that Netanyahu intends to bring for a vote the symbolic annexation of two settlement blocs near Jerusalem. Others say that the Blue and White Party will agree to only limited or staged annexation.