Now that coordination with Israel has officially ended, the Palestinian security agencies are sharing indirect messages with their Israeli counterparts. 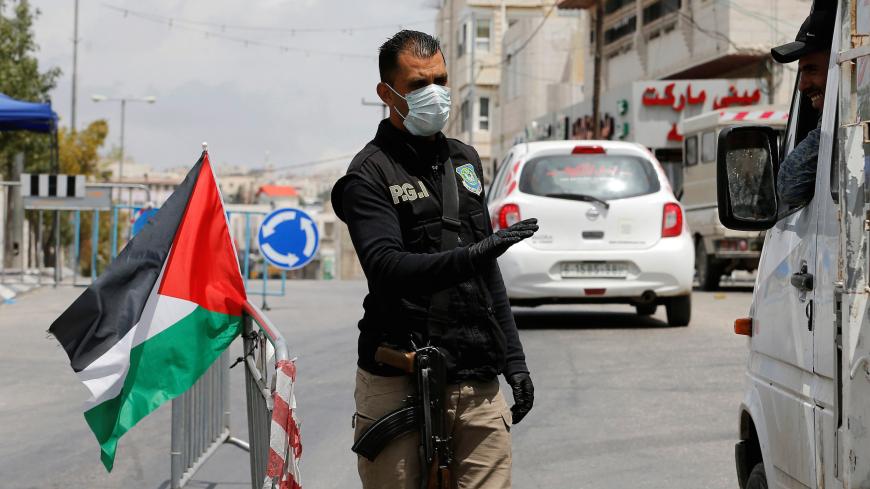 A member of the Palestinian security forces gestures as he speaks with a truck occupant at a checkpoint in Hebron, Israeli-occupied West Bank, May 5, 2020. - REUTERS/Mussa Qawasma

Palestinian President Mahmoud Abbas announced that he was no longer bound by agreements signed with Israel in May, stating, "The Palestine Liberation Organization and the State of Palestine are absolved, as of today, of all the agreements and understandings with the American and Israeli governments and of all the obligations based on these understandings and agreements, including security ones." Nearly a month later, after initial casting about and uncertainty, a new status quo is emerging. The current indirect cooperation includes continued security alerts from Israel to the Palestinian Authority, but hardly any in the opposite direction. It also includes extra care to prevent friction between the two sides’ security forces.

After Abbas’ May 19 announcement, his associates clarified that it includes security coordination with the IDF and the Shin Bet, which for years has helped thwart terror attacks by organizations like Hamas, Islamic Jihad and others.

It must be noted that this security coordination protected not only Israelis, but also the Palestinian Authority and Abbas himself. For example, in 2006, according to the British Sunday Times, the Shin Bet shared information on the intention of a Hamas terror cell to target Abbas and prevented the overthrow of his regime.

It's in the Palestinians' interest to show that they will continue to prevent terror attacks against Israel and in general and that they will maintain control. Hussein al-Sheikh, a senior Palestinian Authority official responsible for relations with Israel, said in an interview with The New York Times: “We are … not fools, and we don’t want chaos. We are pragmatic. We don’t want things to reach a point of no return. … We will prevent violence and chaos. We will not allow bloodshed. That is a strategic decision.”

A senior Palestinian security source told Al-Monitor on condition of anonymity, “We are determined to prevent violence and terror activities in our territory and we will protect any Israeli who enters Palestinian Authority areas.” He clarified that if an Israeli is found in distress in Palestinian Authority areas, the security forces would contact the Red Cross to have him or her returned to Israel and not act through coordination channels with the IDF. “Ending security coordination does not mean allowing violence and terror in our territories and we will not allow any forces to act with violence even at the friction points with the IDF and the settlers,” he emphasized. “But now we will do so without coordinating our moves with the IDF, and if necessary, we will coordinate with the Red Cross and transmit messages.”

Following Abbas’ guidance, the heads of the five Palestinian security forces requested clarification on the new mode of operation. At meeting with Abbas two days after the initial declaration, these leaders were instructed to refrain from direct contact with Israel, but to make sure that peace is maintained within Palestinian Authority areas. Any contact with Israel will be made through international organizations, primarily the Red Cross.

With that, the heads of the security forces instructed their forces not to travel with weapons or in uniform, in civilian or military vehicles, outside of Palestinian Authority territories (outside the West Bank's Area C under Palestinian security control), or near IDF checkpoints in the West Bank.

This new order was tested on June 9, when seven Israelis in two vehicles entered the West Bank city of Qalqilya by accident. Palestinian police stopped them and reportedly turned them back to an area under Israel’s control and reported the incident to the Red Cross office. But an Israeli official involved said that a Palestinian officer called the Israeli coordination and cooperation office to report that the seven were found and were being returned to Israeli territory.

When Israeli border patrol officers chased a truck suspected as stolen and tried to enter Hebron, Palestinian police stopped them. The Palestinian government presented the incident as indicative of a new era in relations with Israel. Since then the two sides have been careful not to let such an incident recur.

An even more sensitive issue is that of Israeli action against terrorism within Palestinian Authority territories. Until Abbas’ declaration, Israel’s security forces had entered villages and cities almost nightly to arrest men wanted for suspected membership in terrorist organizations. Before nearly every such incident, the Palestinian security forces were alerted to keep away from the site. Following Abbas’ announcement such operations virtually ceased, but they have restarted, and miraculously, there hasn’t been any friction. Several residents of the large village of Yabed were arrested June 8 on suspicion of killing Israeli soldier Amit Ben-Ygal on May 12 by throwing a rock at his head during an IDF operation in the village. Israeli security forces worked in the village for several nights without Palestinian interference before suspects were arrested.

A senior Israeli security official told Al-Monitor on condition of anonymity that a few days after Abbas’ declaration, Israel told the Palestinian security chiefs that it would not permit Palestinian security forces to interfere with anti-terror security activities, but it will reduce the potential for friction to a minimum. It's clear that even now messages are being passed between Israel and the Palestinians to keep them clear of its operations. According to the same source, Israel continues to transmit messages to the Palestinians regarding terror plots that could harm the Palestinian Authority itself, but at a far lesser volume.

The two sides know that this situation is temporary and that if Prime Minister Benjamin Netanyahu realizes his intention to actually implement US President Donald Trump’s peace plan and annex West Bank settlements, the situation will change. Israel is preparing for such a possibility, convening the heads of the security establishment, the Shin Bet, Mossad and the IDF June 3 to prepare and plan for new conditions.