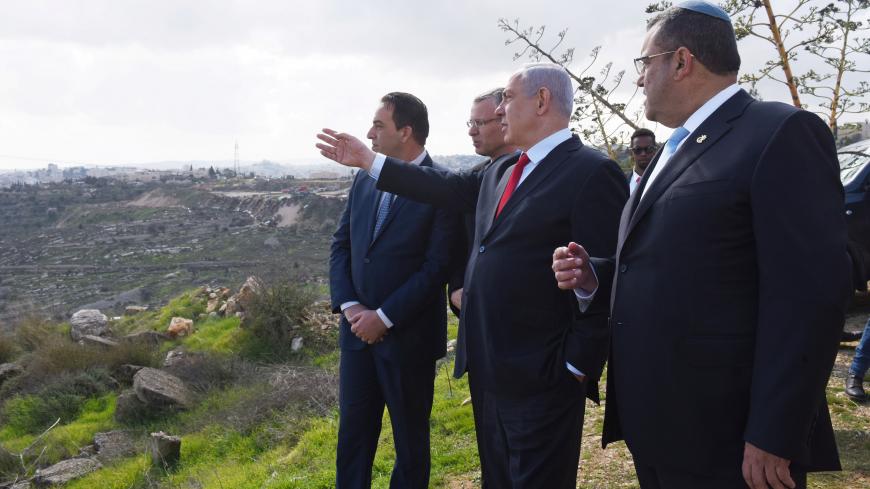 Israeli Prime Minister Benjamin Netanyahu points to the area of Israeli settlement of Har Homa, located in an area of the Israeli-occupied West Bank, that Israel annexed to Jerusalem after the region's capture in the 1967 war, Feb. 20, 2020. - Debbie Hill/REUTERS

Prime Minister Benjamin Netanyahu sat in his chambers with the settler leaders for more than two hours on June 2. The reason? He needs to smooth the political right’s ruffled feathers regarding his intentions to promote annexation as soon as the beginning of July.

Senior figures among the settlers and the political right have expressed reservations and even objections to Netanyahu’s annexation plan. They argue that the annexation he is promoting as a historic step is really a code name for the establishment of a Palestinian state that Netanyahu is also endorsing as part of the US peace plan.

Just a day earlier, the leaders of the settlers met with seniors of the Yamina Party. At the end of that meeting, chairman Naftali Bennett was heard accusing Netanyahu of intentionally hiding the maps and details of the annexation plan. In Bennett’s words, “We do not yet know the details of the plan and the map. Is it sovereignty or Palestine?”

Another Yamina senior who has been giving endless interviews recently is former Transportation Minister Bezalel Smotrich. He, too, has been criticizing Netanyahu harshly. In a June 2 interview with Ynet, Smotrich said, “Netanyahu always talks about partitioning the country. To his credit, he does not lie. He sets conditions, mainly security ones; he talks about a demilitarized Palestinian state, about IDF control over the entire territory. But he does not think that we have the right, — whether ‘right’ appears between quotation marks or not — to rule over a foreign nation and that we have no solution. Therefore, ultimately, the land must be split up.”

The tone inside the Yamina meeting room was that Netanyahu is leading the settlers on. Netanyahu didn’t like what he heard. His conclusion was that the former Yamina ministers — Bennett, Ayelet Shaked and Smotrich, who remained outside Netanyahu’s new government — are behind the right-wing discontent against him in the form of the political and media campaign that is currently gaining ground. He was not wrong.

The Yamina clique, left helpless yet vengeful outside the new government, has no intentions of giving up. The former ministers made the strategic decision to form an irritating opposition to Netanyahu on diplomatic issues and they have only started. Their argument — that Netanyahu is misleading the right by promoting a diplomatic program that he claims fulfills the dreams of the settlers, while it is in effect only another land-partition program — is gathering more followers by the day.

It is also the message of a campaign run by heads of the Yesha Council (the umbrella settlement organization) among right-wing Knesset members, including from the Likud. The goal: to influence Netanyahu to impose sovereignty over the full West Bank.

They also plan to soon execute a media campaign in the United States as well, including billboards and the like, in order to influence the White House. Netanyahu also reported that Yesha heads are dealing directly with US Ambassador to Israel David Friedman, who is viewed as having a pro-settler orientation.

These bothersome developments prompted Netanyahu to hastily assemble the settler heads and devote himself to hearing their arguments. New Knesset speaker Yariv Levin, a member of Netanyahu’s diplomatic staff in mapping the annexation territory opposite President Donald Trump’s advisers, was in attendance. He is viewed as a widely respected and trusted figure on the ideological right.

At Netanyahu’s request, the June 2 meeting with the settlers was held behind closed doors. Leaked details suggest that a group of settler leaders presented Netanyahu with their own map. With it, they tried to show Netanyahu the dangers for the isolated settlements that would remain enclaves in Palestinian territories. The map was based on a draft publicized by the White House when it presented the plan at the end of January.

However, ever since the presentation of Trump’s plan and the Israeli elections in March, no one really knows the extent of the West Bank lands that Netanyahu plans to annex. It is also unclear whether he start with a declaration or make a real move. And no one seems to know when exactly the maps being drawn up by the American and Israeli teams will be revealed. Netanyahu is keeping his cards close to his chest. So far, not even the IDF heads have been privy to the map data.

On June 1, former defense minister and current chairman of Yisrael Beitenu Avigdor Liberman delivered a speech to the Knesset plenum. He stated that neither the chief of staff nor the Shin Bet head has seen the maps and therefore he has doubts regarding Netanyahu’s intentions.

On the other hand, there are signs on the ground that Netanyahu is progressing on plans to begin annexation activities at the beginning of July. According to Netanyahu’s coalition agreement with Gantz, it is the earliest possible date that Netanyahu can begin the process and bring his plan up for a vote.

On June 1, Defense Minister Benny Gantz instructed Chief of Staff Aviv Kochavi to prepare for diplomatic steps. Yet high-level members of the defense establishment complained that they were not shown detailed programs or maps, which of course makes it difficult to prepare for anything.

A senior Likud minister in the defense cabinet told Al-Monitor on condition of anonymity, “Netanyahu will do it. It’s his legacy. We reckon that the Arab world will let it pass. After all, it won’t make a difference on the ground to the life of a single Palestinian.”

The closer we inch to annexation, the more the rift widens on the right. One side argues that even partial sovereignty is a big step, while the other side feels it must be all or nothing. Shlomo Filber, Netanyahu’s former adviser who later turned state witness against him, is one of the more influential people in the settler scene. In a tweet that went viral, Filber rebuked those on the political right who are trying to rain on Netanyahu’s parade. According to Filber, land annexation is a good start after half a century of discourse on withdrawal. “When the snowball starts to roll, it can’t be stopped,” he wrote.

People say that Netanyahu is the sum of his traumas, and there’s a lot of truth to that. In his first term of office, Netanyahu’s government fell because of the settlers who opposed the 1998 Wye River Memorandum. In the years following, he gave them no reason to oppose him. The difference is that this time, as a very strong prime minister and the undisputed leader of the right, he is also looking at the legacy he will leave behind. Thus, this time, he might be willing to take his chances.