US, Iraq look to continue strategic dialogue in Washington next month

Following an initial round of talks in Baghdad, Iraq and the United States have agreed to maintain and expand cooperation in various realms. 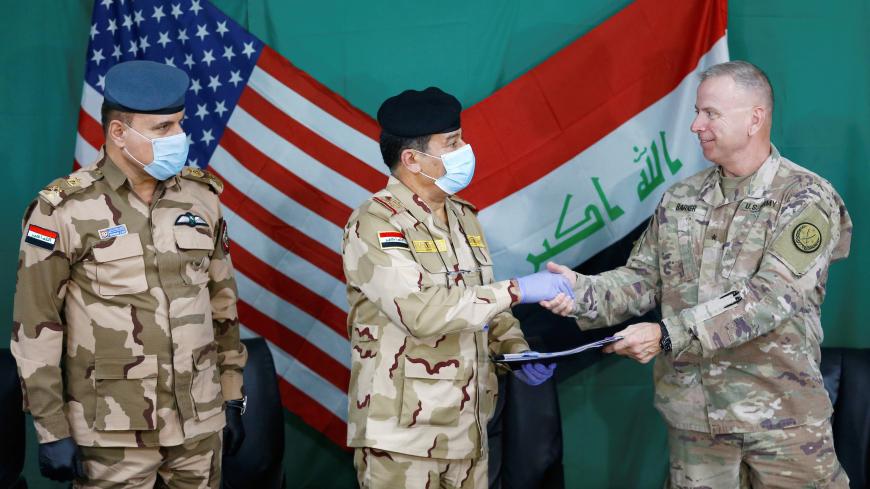 US Brig. Gen. Vincent Barker shakes hands with Iraqi Gen. Mohammed Fadel, as he wears face mask and gloves, following the outbreak of coronavirus disease during the handover of Qayyarah Airfield West from US-led coalition forces to Iraqi security forces in the south of Mosul, Iraq, March 26, 2020. - REUTERS/Thaier Al-Sudani

Following the first strategic dialogue session between Iraq and the United States in Baghdad on June 11, the two delegations issued a joint statement reflecting the decisions reached in the first round of talks.

The statement reaffirmed the Strategic Framework Agreement signed in 2008, as well as other documents between the two countries, in particular two letters from Iraq to the UN Security Council in June and September 2014 calling on the international community to provide Iraq support in its fight against terrorist groups.

Politically, Washington reaffirmed respect for “Iraq’s sovereignty, territorial integrity, and relevant decisions of the Iraqi legislative and executive authorities.” The United States also expressed support for the new Iraqi government and its reform plan and its commitment to organize early elections.  Humanitarian issues — including respecting human rights and “the return and reintegration of displaced people” — were also highlighted.

As a political crisis has been plaguing Iraq in recent months, Iraqi political forces — even pro-Iran groups — have been sending positive signals toward the United States, calling for help to overcome the predicament. Speaking after parliament approved new Prime Minister Mustafa al-Kadhimi in May, the head of the Popular Mobilization Units' (PMU) Fatah parliamentary bloc, Muhammad al-Ghabban, said, “Washington should demonstrate its interest in Iraq by giving priority to supporting Iraq at this critical stage, and assure the Iraqi people of its seriousness in providing assistance to them, and not siding with any Iraqi political party against another.”

In the security realm, Iraq has committed to providing protection to US-led coalition forces operating on Iraqi territory. On the other side, the United States reiterated that it is not seeking permanent bases in Iraq. Instead, Washington is planning to continue reducing the number of forces in the country over the next few months, and will discuss the status of the remaining forces with Baghdad.

Iraq has become a direct battleground between Washington and Tehran following the January assassination of Iranian Quds Force commander Qasem Soleimani by a US airstrike and Iran's bombing of the US military base at Ain al-Asad. US bases in Iraq have been targeted by pro-Iran militias repeatedly over the last few months. Meanwhile, the United States has blamed the Iraqi government for not providing sufficient protection to its embassy, which was attacked by Shiite militias late last year and has been subsequently targeted by rockets launched by these militias.

But Shite political parties close to Iran have been expressing concerns about the US willingness to keep its forces in Iraq. The parties passed a law in parliament after the killing of Soleimani asking the United States to end its troop presence in Iraq. However, Sunni and Kurdish politicians unanimously stood against the decision, while the United States said it would not abide by a decision made only by a group of Shite political parties.

On the economic front, the United States has expressed readiness to send economic advisers to Iraq in order to work with the Iraqi government to rebuild the country's economy, which is facing a severe crisis. Also, potential US investment involving “world-class US firms in the energy and other sectors” was discussed, according to the joint statement.

Following the global drop in oil prices, Iraq has been facing a critical economic situation, leading the Kadhimi government to adopt austerity measures, including reducing public sector salaries and other expenses in order to implement reform plans, while taking strong actions against corruption.

In the cultural section, the two countries agreed to work on returning “political archives," including the Baath Party archives, to Iraq. The latter, currently housed at the Hoover Institution at Stanford University, includes millions of images and other files documenting the brutality of the Saddam Hussein regime.

Finally, the two delegations agreed to discuss these issues at a second meeting in Washington, "likely in July," according to the statement.

Although it is unlikely that the dialogue will resolve all issues in the next session, due to the complexity of the matters at hand, the talks will continue between the two countries and likely witness a significant improvement due to an apparent reduction of Iranian influence in Iraq and the region in general and Iraq's dire need for US support in various areas.