Iraqi political forces said they intend to enact a law to sue Saudi Arabia and have Riyadh compensate for the damage caused by suicide attacks carried out by Saudis in Iraq, which would embarrass the Mustafa al-Kadhimi government that is making a new start in Iraqi-Saudi economic relations. 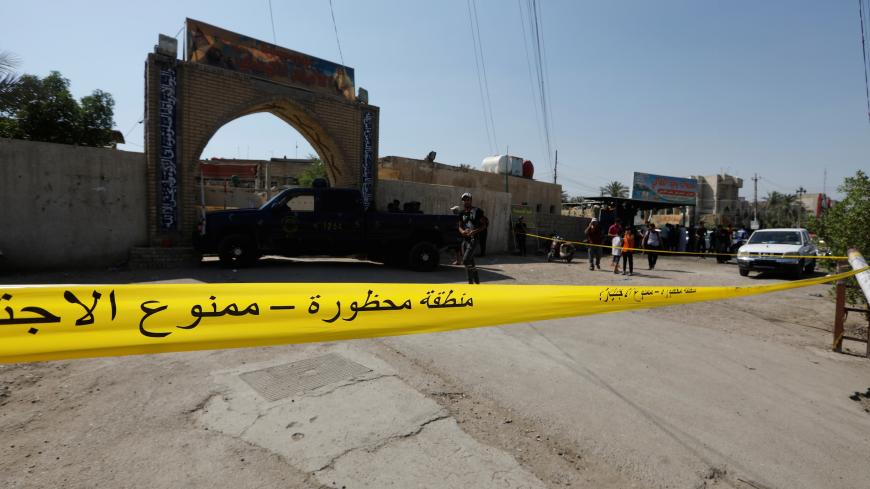 Police tape is seen at the site of a bomb attack at a Shiite Muslim mosque in the Baladiyat neighborhood of Baghdad, Iraq, June 21, 2019. - REUTERS/Khalid Al-Mousily

BAGHDAD — While Iraqi Prime Minister Mustafa al-Kadhimi takes steps to improve relations with neighboring Arab countries and seeks to carry out economic projects with them in an attempt to ward off the repercussions of the current economic crisis, a number of parliament blocs are preparing a draft law to hold Saudi Arabia accountable for “dispatching suicide bombers to Iraq.”

Upon taking office, Saudi Arabia was the first destination of Iraq's new finance minister, Ali Abdul Amir Alawi. Alawi, who also serves as deputy prime minister, arrived in Saudi Arabia at the end of May as Kadhimi’s envoy to discuss the electricity grid connection between the two countries, bring Saudi investments into Iraq and demand that Iraq’s share under April’s OPEC+ deal, which was signed to address the major decline in global oil prices, be increased.

Although the visit was fruitful, some Shiite political parties, including Nouri al-Maliki’s State of Law Coalition and the Popular Mobilization Units’ (PMU) Fatah bloc in parliament, denounced the move taken toward the Gulf States and demanded Saudi Arabia be prosecuted instead. These blocs are seeking a law similar to the Justice Against Sponsors of Terrorism Act (JASTA) passed by the US Congress in 2016, allowing for the prosecution of foreign states, including Saudi Arabia for the 9/11 attacks. They also started a social media campaign to market their draft law.

The parties in favor of suing Saudi Arabia did not specify the legislation’s mechanisms that would force Riyadh to compensate Baghdad. Saad al-Muttalbi of the State of Law Coalition told Al-Monitor the parliamentary blocs that are part of Al-Binaa Alliance, including the State of Law Coalition and the Fatah bloc, are determined to enact a law to hold accountable Saudi parties that publicly promoted and funded the journey of Saudi suicide bombers in Iraq following the US occupation of Iraq in 2003. He added, “This law, which some blocs seek to pass, does not come as a reaction to the Iraqi-Saudi rapprochement. Rather, it seeks to restore respect to Iraq and compensate the victims of suicide attacks.”

Muttalbi expressed hope that the law or demands for compensation would not affect Iraqi-Saudi economic deals. He said, “We are neither opposing the electricity grid connection nor against the Saudi investments in Iraq. We hope that the two issues (passing the law of compensation and economic ties with Saudi) remain separate."

The State of Law Coalition is trying to separate Saudi official authorities from religious and commercial institutions in Saudi Arabia, which it accuses of funding terrorism in Iraq. Yet the Fatah bloc, which includes PMU leaders, has opted for a hard-line stance toward Saudi Arabia and sees no harm in severing ties with Riyadh. Abdel Hadi Saadawi, member of parliament for Fatah, has even said “it is the foreign minister’s job to hold Saudi Arabia accountable. He is required to take actions at the international forums and garner international support for a lawsuit to be filed before the [International Criminal Court], and for compensating the families of car bomb and suicide attack victims.”

There are no constitutional articles prohibiting the enactment of a law to prosecute a foreign state or institution. Yet the Iraqi Constitution does not include provisions explaining how such a law would be enacted. Tariq Harb, jurist and chairman of the Legal Culture Association, explained, “The parliamentary parties’ attempt to legislate a law that would hold Saudi Arabia accountable will not be fruitful. No country is able to hold another accountable through domestic law. Also, international law has not touched on the governments’ liability for their citizens’ actions outside their borders. The Saudi government did not send suicide bombers to fight in Iraq.”

Speaking to Al-Monitor over the phone, Harb said JASTA is a special case because Saudi funds are deposited in US banks and 9/11 victims are compensated through a congressional law. If the draft law is passed, Iraq won't be able to obtain compensation from Riyadh. On the contrary, he added, "Tense Saudi-Iraqi ties and annulment of bilateral trade deals would be harmful to Iraq."

It is unlikely that such a law passes in parliament due to a lack of support. The majority of Sunni, Kurdish and even Shiite parties are against the expected damage that would be caused by weakened Iraqi-Saudi ties. Also, the law could not achieve the desired goals, especially when it comes to compensation, which would not be binding for Riyadh. Such a thing could be seen as mere political showmanship or an attempt to obstruct Kadhimi’s efforts to promote ties with Saudi Arabia and contain Iraq’s economic crisis.

If those blocs opposing the move to open up to Riyadh manage to annul the agreements Alawi signed during his Saudi visit, especially those regarding the electricity grid connection and supplying Iraq’s thermal power stations, the country would be at risk of US sanctions after the four-month waiver ends. The United States gave Iraq a four-month waiver on May 7 to import electricity and gas from Iran. That would also mean that the issue is part of the US-Iranian conflict, which has heightened in Iraq.

Al-Monitor has learned from sources close to Kadhimi who spoke on condition of anonymity that Shiite blocs are giving him free rein in drawing his foreign policy so as to serve the interests of the country and save it from the economic crisis and US sanctions. Yet these blocs changed their minds after media outlets revealed a US request that Kadhimi promote ties with Saudi Arabia and the United Arab Emirates to minimize dependence on Iranian goods and commodities. That explains why these political blocs are resorting at this time to parliament to oblige Kadhimi to adhere to a specific policy with Riyadh.