Ongoing protests in the United States over the killing of George Floyd have raised awareness among Iraqis about African-Iraqi rights in the country. 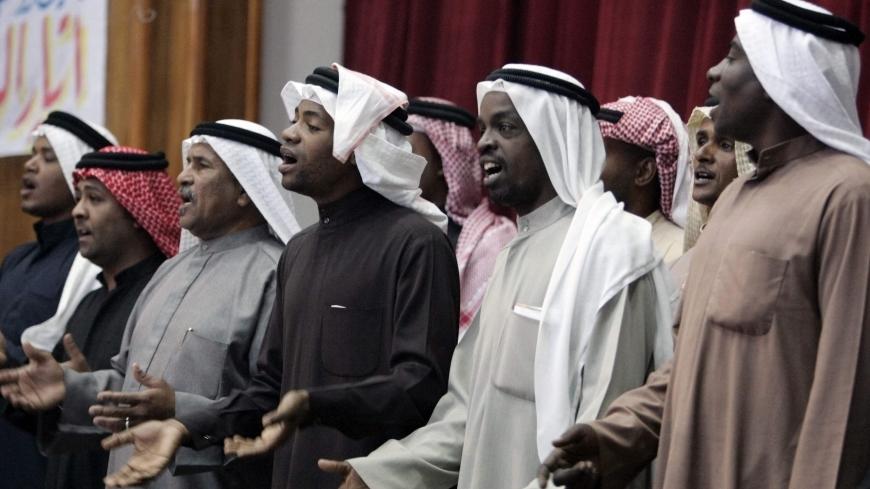 African-Iraqi men sing after their group Movement of Free Iraqis was approved as a political party to run in the coming local elections in Basra, 420 km (260 miles) southeast of Baghdad, Dec. 6, 2008. - REUTERS/Atef Hassan

BAGHDAD — The police killing of George Floyd and the ensuing protests in the United States are being used by Iraqi activists to raise awareness about the rights of African-Iraqis. At the same time, many Iraqi protesters have drawn parallels to the US movement, criticizing the way the Iraqi authorities have been dealing with Iraqi protests since they began in October 2019.

Online debate has recently focused on the fate of the African-Iraqi minority, which has been deprived of official recognition and political representation in government. The debate has evoked the 2013 assassination in Basra of the most prominent African-Iraqi figure, Jalal Diab. Diab was an African-Iraqi leader who founded the Movement of Free Iraqis (Ansar al-Huriya) in 2007 to protect Iraq's black community, which is estimated at about 400,000.

Iraqi activist Ammar Jassem, who served as vice president of the Movement of Free Iraqis, said he was determined to organize a demonstration to give voice to African-Iraqi rights on the occasion of Floyd's death. But the event was canceled due to the fear of the African-Iraqi community. Since the assassination of Diab, he told Al-Monitor, things are no longer the same. "The bullet that penetrated [Diab's] body assassinated all our dreams as a minority seeking equality," said Jassem.

African-Iraqis are of several ethnicities. Some are Nubians from Egypt; others are from Zanzibar, Ethiopia and Ghana. They are mostly located in Basra province, particularly in Az Zubayr and Abu al-Khaseeb. African-Iraqi heritage expert Sawra Yusuf told Al-Monitor, “Each group has different rites. The Nubians from south Egypt in Africa, al-Habash from Ethiopia and the Kenyans from the coast share Bambassa tribal roots. They all were transferred during slavery time in the Abbasid caliphate between 750 and 785."

Blogger Mouayed Sari took to his Facebook page to bring to the forefront African-Iraqis' struggle to gain their rights. He told Al-Monitor that it would only be fair for every Iraqi to put themselves in the shoes of this tormented minority and read about them and their plight throughout the past centuries. He believes this is all part of the collective awareness awakened by the October Revolution that broke out across Iraq in 2019.

“I hear many complaints along the lines of ‘the majority itself is deprived of rights in this country, so how do you expect minorities to attain their rights,’ and I believe that such logic is no longer acceptable after the October Revolution in Iraq, as justice should be inclusive of all individuals. But it should first start with the courage of recognition. In this context, the recognition of the injustice that occurred to the Iraqi people is a valid approach to achieving comprehensive social justice,” Sari noted.

On Nov. 5, 2009, Basra’s African-Iraqis celebrated the victory of former US President Barack Obama, who thus became a role model for Diab and his comrades.

A noticeable change in Iraqi awareness in terms of the rights of this forgotten minority can be seen between Obama's victory in 2009 and Floyd’s death in 2020, as activists have begun comparing African-Iraqi Diab to African American Floyd, both of whom were victims of racial discrimination and persecution of black people in their societies.

In this context, journalist Ali Abdul Ameer Ejam posted a short video on YouTube about the struggle of Diab, who declared the Movement of Free Iraqis to defend the rights of African-Iraqis.

The video, which was published as part of a series of videos that Ejam called Iraqi Paradoxes, is titled "Angry at the killing of an African American, but silent about the assassination of African-Iraqi citizens from Basra."

Ejam used this video to highlight how Iraqis are disturbed by Floyd’s killing, which is a positive reflection of human solidarity, but they do not lift a finger when a fellow Iraqi citizen such as Diab is killed. He believes this shows the hypocrisy and double standards because cross-border human and cultural solidarity is indivisible.

The comparison is no longer about simply being a victim of discriminatory policies; rather, it is being used by Iraqi activists to criticize the misinformation used by a wide segment of commentators who justified the involvement of Adel Abdul-Mahdi’s government in killing hundreds of Iraqi citizens in the protests months ago but now criticize US President Donald Trump and his government on dealing with the protests over Floyd's killing.

This controversy sheds light once again on the reasons behind Diab’s assassination in 2013 after his demands for the rights of all 400,000 African-Iraqis constituted a threat to the parties of political Islam, especially since such demands were associated with an awakening of identity that invoked American figures that these parties consider hostile for ideological reasons.

Diab had posters of Martin Luther King Jr. and Obama on the walls of his school that was dedicated to teaching underprivileged African-Iraqis in the slums of Az Zubayr. It was a message of defiance and the sign of a culture that those parties feared, especially amid the Iranian-American rivalry for influence in a region rich in energy and ethnic diversity.

African-Iraqi activists are breathing life into Diab’s demands for their political rights and underlining how political recognition is the best way to end discrimination at the social level. Other activists focus on the cultural aspects, document the rituals and heritage of African-Iraqis, and stress the need to preserve their distinct cultural identity.

Thawra Yousif, an expert on African-Iraqi folklore, told Al-Monitor, “Ending discrimination is a cultural issue, and by developing awareness over the importance of the African-Iraqi culture, justice can be achieved — even if this does not result in political representation.”

Today, both Floyd and Diab have become icons of a struggle that has awoken demands for social justice, equality, and an end to discrimination in both Iraqi and American societies. However, the image of Diab is more powerful and iconic in regards to black people's rights in Iraq, since he was a civilian activist influenced by Martin Luther King Jr., demanded an end to racial discrimination, and called for political equality and granting African-Iraqis a quota in power that was equal to other minorities.