UN seeks to raise awareness of bias against African-Iraqis

Iraqis of African descent seem to be making progress, albeit slowly, against discrimination, with the UN's help. 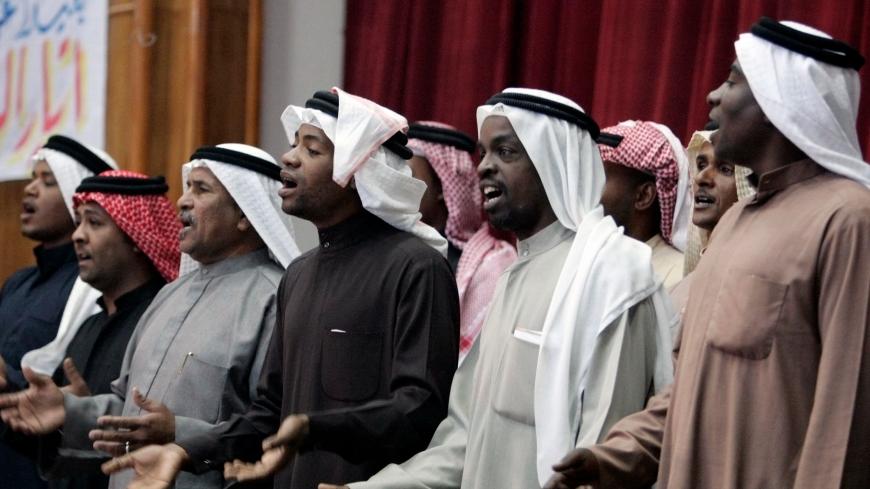 African-Iraqi men sing after their group Ansar al-Hurriya al-Insaniya was approved as a political party to run in the coming local elections in Basra, Iraq, Dec. 6, 2008. - REUTERS/Atef Hassan

BAGHDAD — A recently convened UN committee addressed discrimination against many minorities in many countries, including Iraqis of African descent. Its conclusions shed light on the marginalization of this almost forgotten minority — forgotten especially years after the 2013 assassination of one of its main leaders, Jalal Diab, in Basra.

Diab had posters of Martin Luther King Jr. and Barack Obama on the walls of his school dedicated to teaching poor African-Iraqis in the slums of the Az Zubayr area of Basra. The two pictures showed an unexpected awakening of identity in the areas of the oil-rich Basra province where this minority lives. And this same province has witnessed popular protests in recent years.

Inspired by Diab, and subsequently his death, this group raised its voice in protest, seeking an end to discrimination and to gain the rights afforded to all other minorities.

Thus, the observations of the UN Committee on the Elimination of Racial Discrimination (CERD) can be considered the victory of Diab, who spent his life fighting for these rights and was known as the “Martin Luther King Jr. of Iraq."

CERD, during its session in Geneva on Nov. 26-Dec. 14, raised the issue of civil society's responsibility to promote tolerance and prevent discrimination. It called for national cohesion and pointed out that a country's educational curricula should reflect its people's linguistic and cultural differences. The committee said it was concerned about persistent structural racial discrimination, stigmatization and marginalization of people of African descent.

The committee recommends that the “Iraqi State party redouble its efforts to effectively combat" this discrimination "by taking special measures to reduce the poverty and the social exclusion of people of African descent and increasing their access to adequate living conditions, education, health, housing and employment."

In its first reaction to the topic, the Iraq High Commission for Human Rights (IHCHR) published on its website that Ali Akram al-Bayati, a member of the Office of the UN High Commissioner for Human Rights (OHCHR), has stated that the UN has issued the first international convention acknowledging the rights of black Iraqis to political representation and assignments, among other things. The UN has called on the Iraqi government to fight racial discrimination, stating that Bayati "considers this convention a victory for humanity crowning the efforts of the OHCHR and the work it has invested into this noble outcome."

"This will be a giant leap in this field," IHCHR said.

African-Iraqis are of several ethnicities. Some are Nubians from Egypt, others are from Zanzibar (an island in the Arabian Sea facing Yemen), or from Ghana or Ethiopia. African-Iraqi heritage expert Sawra Yusuf specifies their descendance based on the rites and customs they have been practicing for centuries in specific areas called al-Makayed ("restricted") and in certain locations within Basra province like Az Zubayr and Abu al-Khaseeb.

Yusuf told Al-Monitor, “Each group has different rites. The Nubians from south Egypt in Africa, al-Habash from what is currently Ethiopia and the Kenyans particularly from the coast share Bambassa tribal roots. These rites were transferred through slave trade during the Abbasid Caliphate between 750 and 785. After the slaves settled in Basra, they established their own society and practiced their rites as reassurance while they were away from home.”

Yusuf called on the Iraqi government to help preserve African-Iraqi rites and their oral history, while African-Iraqi activists focus on political rights.

Ammar Jassem, vice president of Ansar al-Hurriya al-Insaniya (Movement of Free Iraqis), one of the major organizations representing African-Iraqis in Basra, said IHCHR's observations present the Iraqi government with “a door to engrain the demands that the community has been calling for over the years to improve its political representation, grant it the quota [of parliament seats] it deserves just like other minorities and end the racial discrimination through passing a law penalizing anyone who practices it.”

Jassem had previously run for election to provincial committees to represent African-Iraqis in Basra. Diab supported him in 2013; however, after Diab's assassination, Jassem stepped down and temporarily left Basra as he feared for his life — especially since he was in Diab’s car at the time of the incident.

Years after Diab announced the movement to protect African-Iraqis' rights, as he headed Ansar al-Hurriya al-Insaniya that would become the first political framework for their rights in the Middle East, CERD observations and its recommendations to the Iraqi government are the community’s opportunity to obtain justice after centuries of discrimination and inequality.