Although Iraqis of African descent have had a significant presence in the country since the days of slave trade, particularly in the port of Basra, this community continues to face racism today, as it has for centuries. 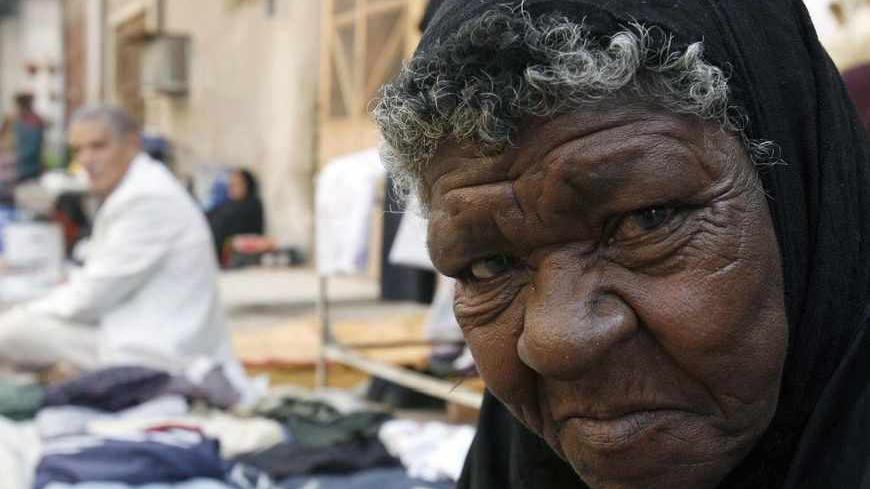 An African-Iraqi woman begs for money on a street in Basra, Dec. 4, 2008. At the time, some Iraqi blacks, inspired by Barack Obama's first election as president in the United States, said they planned to run for election to end what they called centuries of discrimination because of their slave ancestry. - REUTERS/Atef Hassan

Their first reaction would be to repeat that the era of racism against blacks ended decades ago, or with the advent of Islam. But those ideas conflict with the societal reality in Iraq.

Although racism has been illegal under the Iraqi legislative system since the founding of the state in 1921, this minority is trapped by different types of discrimination and racism within society. The legislative and educational systems, as well as the official Iraqi media, need to give special attention to the issue by passing laws that criminalize any form of racism or discrimination, while educating the community in this regard.

Iraq, like other countries in the ancient world, witnessed a wide slave trade, as Baghdad was the capital of the Abbasid Caliphate for over five centuries. The trade was at its peak back then, and slaves of different races were brought to Iraq to be sold in the slave markets.

The Zanj rebellion (869-883 AD) paints a historical picture of the spread of slavery at the time and reflects the intensity of racism and injustice. The rebellion started in Basra, included half a million slaves and swept across a vast country. The rebellion continued to Mecca, where slaves stole the black stone of the Kaaba, seeing it as a symbol of the values ​​of their masters, who had legalized the trade. The rebellion was eventually put down, as thousands were killed and many displaced and brought back to slavery.

African-Iraqis originate from many countries of Africa, and they have been brought to Iraq in different periods up until the beginning of the last century. They were used in farms and homes, and sometimes in combat confrontations in the ongoing disputes between the princes and aristocrats in the south and center of the country, within the aristocratic structure of Iraqi society at the time. They are still used as servants in the houses of clan elders or employed in very low fields of work.

Collective awareness about the identity challenges facing the black minority in Iraq rose after the fall of Saddam Hussein in 2003. Black Iraqis started to form associations and organize social events to demand their rights to participate in political and social life, but they continued to face many obstacles socially, culturally and politically. The Free Iraqi Movement is this minority’s first official entity. It was founded by Jalal Diab and other Iraqi Africans in 2007, and is a secular civil gathering aimed at achieving their rights away from racism or discrimination, as expressed by the founder of the movement.

In the book “Minorities in Iraq,” edited by Saad Saloum, there is a chapter titled “Black Iraqis: Scarred Memory and Recovered Identity” in which Diab tackles discrimination and racism against slaves, including religious mythology, social behavior and political participation.

Blacks were increasingly treated as inferior, which undermined their humanitarian value in a culture that was racist against black people. This is with the knowledge that a few of the old thinkers tried to criticize this phenomenon, like al-Jahiz (AD 869), who did so in his book, "The Superiority of the Blacks to the Whites."

The popular stories taken from the Book of Genesis say that blacks originate from Ham, the son of Noah. According to these stories, Ham mocked his father and God then punished him by making his descendants enslaved blacks. Moreover, religious holy books did not declare the abolition of slavery, but rather approved it — directly or indirectly — and have even helped to broaden and deepen the culture of slavery.

Second, social habits and norms expressly distinguish between freemen and slaves. The vast majority of Iraqis are opposed to mixed marriages between slaves and the “Sadah,” who are the descendants of the Islamic Prophet Muhammad, considering that there is a difference in lineage and purity. The word “slave” is still attributed to black people in cases of conflict, mockery or even in their absence when someone wants to introduce them and distinguish them from white men. An example of this discrimination would be an anecdote from Marwa, who told Al-Monitor that she was asked to hand over her passport during a trip to the Iraqi Kurdistan region. The police considered her a non-Iraqi foreigner, and she complained of being sarcastically addressed as Michael Jackson and Bilal ibn Rabah al-Habashi (the black muezzin of the Prophet Muhammad). Moreover, there is no common social hub that aims to develop the social situation of blacks. For this reason, it is very rare for black Iraqis to hold degrees and occupy intermediate ranks in the army, police or official departments, even in their own regions.

Third, their political participation in the country has been largely undermined, and not one of them has reached the level of minister, MP in the national parliament, member of the municipal councils or general manager or such. It is noteworthy that their marginalization persists although they exceed about 1.5 million, according to the Free Iraqi Movement Vice President Salah Ruhais Salman, or 2 million, according to a statement made by the secretary-general of the movement, Abdel Hussein Abdel Razzak. They have presented candidates more than once to the Basra provincial council, but they have not won any seats. According to a document published on Wikileaks, the director of the US Embassy’s regional office in Basra, Ramon Negron, said, “The black community suffers disproportionately under the government’s patronage-based political system. … [Otherwise,] a unified black community would easily have enough votes to win at least one seat on [Basra’s Provincial Council].”

The black community in Iraq aspires to legitimate rights, including the recognition of their existence, an official apology for the long history of discrimination and racism against them, the legalization and enforcement of clear and express laws that forbid and criminalize any sort of persecution against them, different treatment in the public sector, the integration of social awareness programs in the school curriculum to call for the respect of all races, colors and religions. This would pave the way for public representation in local councils, the parliament and all governmental departments, and finally shed light on them in the media, leading to a share of the state’s official media being dedicated to them.

It is noteworthy that Diab, the founder of the Free Iraqi Movement, was assassinated on April 26, 2013, in the wake of the local council elections in Iraq. Before the incident, the movement had presented two electoral candidates, some of whom withdrew immediately after the assassination. Opposing parties or regional sides might be blamed for this assassination.

This movement was influenced by the American civil rights movement, and widely celebrated the victory of Barack Obama in the American presidential elections. Diab himself had hung photos of Obama and Martin Luther King in the movement’s affiliated schools and centers, thus provoking anti-US political and religious parties. Moreover, several political and social figures expressed their irritation with the events of the movement and described their demands as exaggerations and political bargaining.