The little-known community that largely traces its roots to the Ottoman slave trade is speaking out about police brutality in America, saying their own example of coexistence is an example for the West. 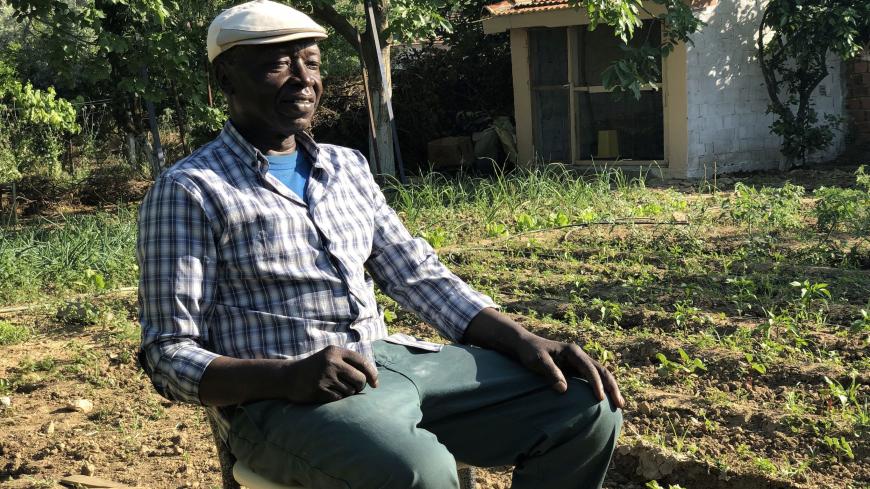 An Afro-Turk is pictured outside his home in the village of Tulum, near Izmir in western Turkey, May 18, 2019 - Ayla Jean Yackley

ISTANBUL — Turkey’s Black minority has joined the global protest against the killing of African-American George Floyd, part of the community’s greater expression of its identity in a country that is often loath to embrace its diversity.

Turks of African descent gathered in the western port city of Izmir earlier this month to condemn US police brutality as protests spread from Minneapolis, where Floyd’s May 25 killing was caught on video, across the United States to Europe and the Middle East, transforming the Black Lives Matter movement into a global cry for social justice.

Often called Afro-Turks, Turkey's tens of thousands of Black citizens live mainly in Izmir and towns near the Aegean coast, many of them descendants of slaves brought to the Ottoman Empire. In recent years, they have established associations, organized cultural events, run for political office and are working with researchers to record their underdocumented history.

An annual highlight is the Calf Festival, once celebrated by slaves and revived in 2007. Each spring hundreds of residents, both Black and white, don African-style masks and dress to dance in a parade through Izmir’s city center. This year, the coronavirus outbreak forced organizers to cancel.

“We walk with pride, whereas previously we were timid, worried people would make comments. I realized this was a mistake. As people learn more about us, we are met with greater understanding,” said Sakir Doguluer, head of the African Culture, Solidarity and Assistance Association, also known as the Afro-Turks Association.

Today’s population is difficult to ascertain, as ethnicity is not asked on the Turkish census and generations of intermarriage have blurred ethnic lines. Doguluer estimated there are between 25,000 and 100,000, including in Konya, Adana, Istanbul and along the Black Sea.

Nevertheless, few in Turkey seem aware that one million Africans were forcibly brought to the empire, from the Balkans to north Africa and the Persian Gulf, in the 19th century alone, according to an educated guess by Hakan Erdem, history professor at Sabanci University and one of Turkey’s few scholars working on slavery.

“Slavery is perceived as a foreign phenomenon, which it is not. … From the beginning, Ottoman society was slaveholding,” he said. “It’s not taught in schools [and] it’s not part of the social and learned memory of Turkish citizens.”

Historians have found evidence of Black slaves in present-day Turkey as far back as the 14th century, and Ottomans traded in African eunuchs beginning in the late 1500s, some of whom rose to powerful posts in the imperial regime. Most Afro-Turks trace their roots to east Africa, including Sudan and Ethiopia, and forebears who labored in Aegean cotton and tobacco fields in the 1800s. Others were forced to work in households as cooks and child caregivers or became soldiers and civil servants.

The practice never rivaled the transatlantic slave trade in scale nor brutality. It was not delineated along the same racial lines, with whites from captured territories also enslaved. Manumission rates were high, and indentured servitude also existed. After the sultan bowed to international pressure and banned their trade in 1857, the authorities intercepted captives at Izmir’s ports and settled them as immigrants in villages, a handful of which remain majority-Black, said Erdem. Yet the Ottomans did not abolish slavery outright and clandestine bondage persisted into the early 20th century.

The lack of awareness of Afro-Turks’ origins parallels Turkey’s often uneasy relationship with other minorities. Most Christians have been forced out over the last century, while other ethnic groups have been largely assimilated. The cultural and political expression of Kurds, Turkey’s biggest minority group, is curtailed. The European Union has long pointed to Turkey’s treatment of ethnic, religious and national groups as “a matter of serious concern,” though it doesn’t mention Afro-Turks.

Yet Turks view racism as someone else’s problem. Nearly two-thirds believe racism does not exist in Turkey, according to a survey released this month by Istanbul Economy Research. More than half said the police killings in the United States would not occur in Turkey despite a number of such incidents, including the shooting death of a Syrian teenager in April.

President Recep Tayyip Erdogan told his American counterpart Donald Trump that Floyd’s killing was “inhumane” and said Islam compels him to fight the mistreatment of Blacks and refugees, without acknowledging the criticism of Turkey’s own human rights record.

Mesut Mercan, who launched an unsuccessful bid for mayor of the western town of Selcuk last year and describes himself as “a good Turkish nationalist,” also credited Islam for staving off the uglier forms of racism that have roiled the United States. His group, the African Turks Development and Solidarity Association, organized one protest of Floyd’s killing, pledging to send 1,000 Qurans to US activists. Most Afro-Turks are practicing Muslims and are fiercely proud to call themselves Turks.

“The Ottoman understanding of slavery was not based on race. There is a world of difference with those Americans whose ancestors were abducted from their lands with chains around their necks and ankles,” said Mercan. His family first arrived in Turkey 400 years ago as free people, he said.

The Afro-Turks Association took part in another anti-racism rally “to say to the world, those with African roots living in Turkey do not endure the racism that occurs in America or Europe,” said vice chair Beyhan Turkkollu.

They are sometimes confronted with subtler forms of discrimination, such as being mistaken for foreign tourists, she said. The misnomer “Arabs” is used for Blacks, as is the pejorative “zenci,” borrowed from Arabic for “dark skinned.” Recent African migrants in Turkey say they are disrespected, including being touched or laughed at by strangers on the street.

The relatively open nature of the Ottoman system of slavery allowed those of African descent to enter wider society, including through marriage, which continues today, Erdem said. But that melding has also meant traces of African culture, like language, are all but lost today.

One of the main characteristics, what identifies and affects us, is our color, it’s all we have left. Mixed marriages cause that color to disappear, but this has helped create a richer culture,” Turkkollu said. Vestiges of the past can be found in food, including a traditional okra dish that may have originated in Africa, she said.

The late activist Mustafa Olpak, who founded the Afro-Turks Association, is widely credited with removing the veil surrounding his community, writing a 2005 memoir that explored his family’s passage from Kenya to Greece and on to Turkey. Nikki Brown, a professor of history at the University of Kentucky, completed the American edition of Olpak’s story, to be published by Stanford University Press next year.

“Mustafa took this huge chance to talk about the role that ethnicity and race plays in Turkish identity,” Brown said. In her own research, she is often confronted by claims in Turkey that “slavery was a long time ago and the Afro-Turks are dredging up bad memories by talking about it," she said. "That excuse really resonated with me as an African-American.”

The passage of time has made recording the history of Afro-Turks more urgent. Brown is working on an oral history project in western Turkey and plans to publish a book with subjects’ photographs and stories, as well as a digital archive for the community.

“A lot of these people are [elderly], and their stories are dying with them. There is so little literature on their history that these people become the living, walking narratives of the entire history of the Afro-Turks,” she said.

Editor's note: This article has been updated with new comments since its initial publication.